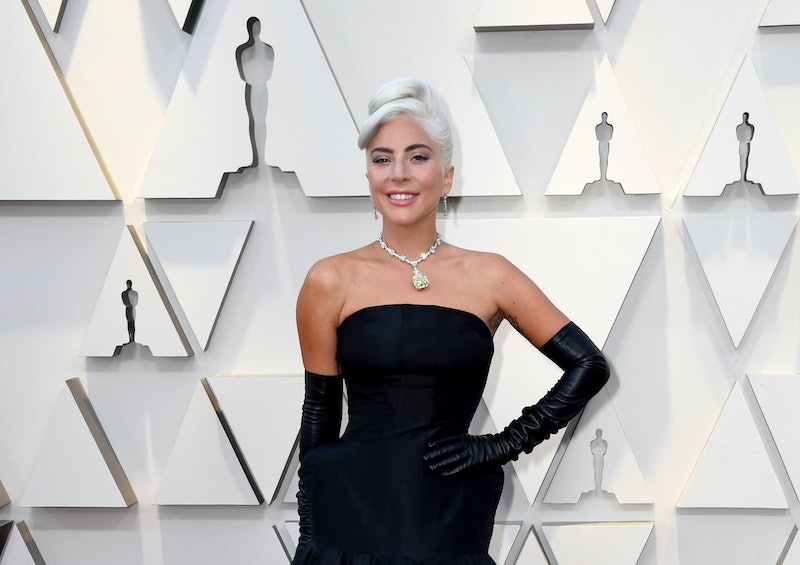 Her Oscar-winning song "Shallow" is still climbing up the charts, but Lady Gaga already has her sights set on her next release. While jokingly shutting down pregnancy rumors on Tuesday, March 12, Lady Gaga teased a new album by telling fans she's "pregnant," and teased that her new music would be released sooner than fans think.

Shortly after her passionate and headline-grabbing performance at the Academy Awards with Bradley Cooper, tabloids began reporting rumors that Gaga is pregnant, despite recently splitting from her former fiancé Christian Carino. However, on Tuesday night, the singer fired back at reports that she was getting ready to become a mother in the next nine months, joking that the only thing that she's currently expecting is her newest album. "Rumors I’m pregnant? Yeah, I’m pregnant with #LG6," Gaga tweeted on Tuesday evening.

While Gaga hasn't offered any more details about her new music, her comment about being "pregnant" with her sixth studio album, implies that fans could be hearing new songs sooner rather than later. Adding to that speculation is the fact that Gaga was spotted in and out of the recording studio often in the last year, with Forbes reporting in June that Gaga was working with EDM producers BloodPop and Boys Noize. And according to Entertainment Weekly, DJ Whiteshadow, who Gaga collaborated with on Artpop and Born This Way has been teasing the singer's sixth album as a return to her dance-pop roots, even calling it the "little sister" of Artpop on social media in 2017.

"Four years ago I put out a record called ARTPOP with @ladygaga. I could write a book about it, maybe one day I will. I lost a best friend and manager, LG lost her entire support team, and we were all alone. I am so grateful for this record because it taught me a lot. I made some friends that have changed my life forever in the halls where this record was recorded, whom I love so incredibly deeply," the producer wrote in an Instagram post celebrating the album's fourth anniversary, according to EW. "Happy 4th Birthday. I can’t wait to introduce you to your little sister #LG6."

Though the production and release of the Star Is Born soundtrack took up most of the singer's last year, Gaga has actually been working on her sixth album since 2017, telling EW in August of that year that she was already writing for the project. "I’ve started writing," Gaga told the outlet during the promotional cycle for her fifth studio album, Joanne.

At the time, though, she told the magazine that it would be a while before fans heard any of her new music. "I have a lot of ideas and a lot of things I want to create, so you’ll see in a bit. I need some time to create," she explained. A few months later, however, Gaga gave fans a glimpse at what she had been creating when she sang a new song during a meet and greet ahead of her Nov. 5, 2017 show in Indianapolis. According to the IndyStar, Gaga sang a track called "Frankensteined" before the show, which EW reported is about a "turbulent period in Gaga's career."

In the meantime, however, Gaga has been primarily focused on the Star is Born soundtrack, recently celebrating "Shallow" reaching No. 1 on the Billboard charts on social media. "I can’t believe Shallow is #1 on the Hot 100, and the soundtrack is #1 as well," she wrote in an Instagram post shortly after the Oscars on March 6. "This is my first #1 song in 8 years, and it feels like Just Dance going number one all over again."

She wrapped up her celebration with a note thanking her fans for all of their support. "Rule #1: Never give up," she wrote. "Rule #2: Always listen to rule #1. Thank you so much to all our beautiful fans. You make my dreams come true."

From the sounds of it, Gaga could be planning to show her gratitude to fans with brand new music very soon, which means that audiences at her Las Vegas residency will spend every night hoping for the chance to hear a new song for the first time.