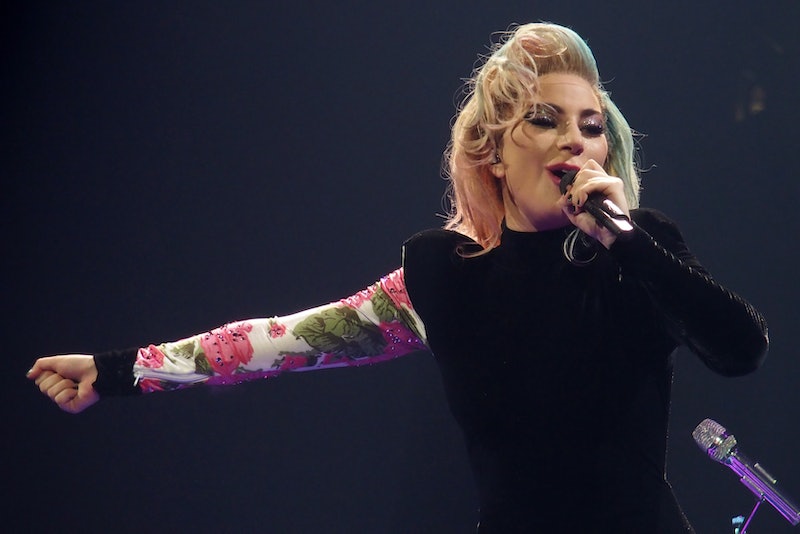 Forget reading tea leaves, this Halloween, Lady Gaga's little monsters are searching for hidden messages in jack-o'-lanterns. On Wednesday, Oct. 30, Lady Gaga shared photos of her jack-'o-lanterns on Instagram, and fans began speculating that her cryptic carved messages could be hinting that new music is on the way. If the "Shallow" singer is hiding musical secrets in her Halloween decorations, she's keeping the hints to a minimum — she posted three separate photos, but none of them included captions.

The first photo features a pumpkin with the words "F*ck This" painted on it, but what really caught Gaga's little monsters' attention was an iPod strategically placed next to the gourd. Twitter users noticed that the phone appears to feature the words "Stupid Love," as reported by People. At first glance, this seems like a stretch, but per Cosmopolitan, a fan reportedly posted a snippet of a new song by Lady Gaga called "Stupid Love" to Twitter in August, prompting it to be taken down by the social media platform.

If "Stupid Love" really is on the way, it could mean that Lady Gaga's first new album since 2016's Joanne will be released soon (the singer was recently heavily featured on 2018's A Star Is Born soundtrack, but fans are eager for a new album of all Gaga songs). The singer has yet to share details about any forthcoming new album, but a second photo of jack-o-lanterns could hold a second clue. In a separate Instagram post, she shared a photo of six pumpkins of assorted sizes, and one gem placed among them. Counting A Star Is Born, the "Bad Romance" singer technically has released 6 albums, so if she's really dropping clues, the gem could signify a potential seventh album — although this is a bit of a stretch since Gaga herself has referred to her next album as #LG6.

Not featured in the pumpkin group photo is a jack-o'-lantern that's painted all white with the words "Ghosted" carved into it. It could be an album title hint, or just Gaga having fun at what appears to be a pumpkin decorating party. Either way, her little monsters are busy theorizing about her cryptic Halloween clues.

In September, Gaga confirmed that she is hard at work on her untitled sixth studio album when she shared a photo of herself in the studio via her Instagram Story. Back in March, she also tweeted, "Rumors I'm pregnant? Yeah, I'm pregnant with #LG6."

Whether her pumpkins are full of secret messages or not, a new album of Lady Gaga songs is definitely in the works.

More like this
Twitter Is In Awe Of Taylor Swift’s “Lavender Haze” Music Video
By Jake Viswanath
Shakira’s Record-Breaking New Song Takes Direct Aim At Her Ex Gerard Piqué
By El Hunt
Cruz Beckham Teased New Music With An Adorable Nod To Mom Victoria Beckham
By Stephanie Topacio Long
Zach Gilford Admits He Forgot Taylor Swift's Name When He Starred In Her Music Video
By Jake Viswanath
Get Even More From Bustle — Sign Up For The Newsletter
From hair trends to relationship advice, our daily newsletter has everything you need to sound like a person who’s on TikTok, even if you aren’t.