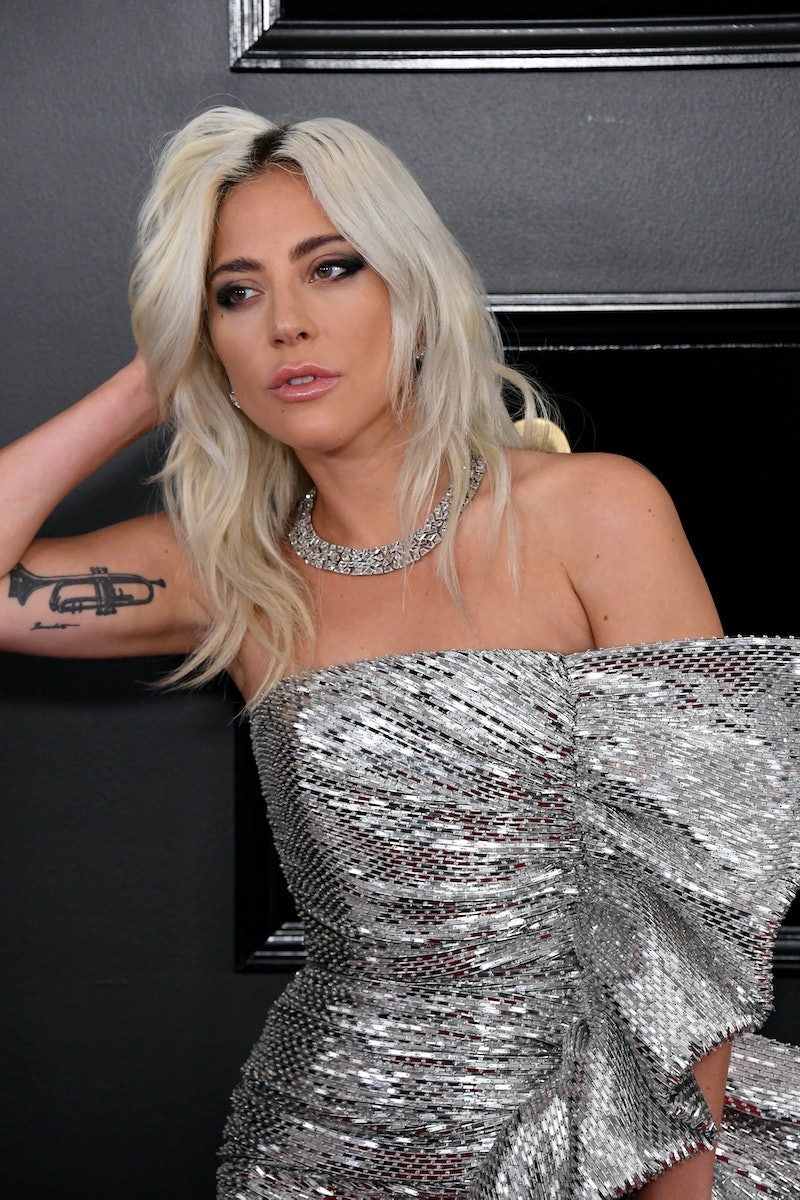 Lady Gaga is celebrating awards season and the role of a lifetime in a very Gaga-esque way. The singer, nominated for the Best Actress Oscar for her work in A Star Is Born, followed last weekend's Grammy wins with two new tattoos. Lady Gaga's new music note tattoo had a mistake — one that she already fixed. It's a sheet music staff with notes that lives on her inner arm. She also got a massive rose tattoo on her spine. Both of her new tattoos are related to the love of her life — music!

The tattoo with the typo was minimalist and had a major error a la Ariana Grande's "BBQ grill" ink. Gaga inked musical notes on a staff on her inner arm, which she shared on her Instagram. The four notes spell out her name "G A G A."

Clever, custom, low-key, distinct to her, and utterly awesome, right?

Well, it was designed incorrectly at first. Gaga shared a now-deleted photo where the staff only had four horizontal lines when there should have been five. Gaga and her tattooist immediately leapt into artistic action and rectified that situation, adding the fifth line. They averted an ink emergency and a "musical crisis," laying the blame on liquor. Her manager Bobby Campbell got a matching staff tattoo, as well.

Gaga chalked the quickly-fixed mistake up to tequila. No big.

She had a good sense of humor about it — and likely because it was easy to amend.

The epic rose runs from the back of her neck down to the small of her back. It's not a traditional, flash-style rose, either. Rather, it's a simple, unembellished design, complete with leaves and thorns. The words "La Vie En Rose" spill down her back along either side of the stem. That's a reference to the song that her character sings in the film that has catapulted Gaga's career into the stratosphere. Mother Monster showed off the new spinal tattoo on Instagram. It was as though it was a Valentine's Day gift to herself amid rumors that she and her fiancé (and agent) Christian Carino have split. That news is unconfirmed ATM, though.

Gaga captioned the image by thanking her tattoo artist for basically turning her spinal cord into a rose. Because that’s exactly what happened. It's truly a simple and stunning etching. It didn't need to be ornately designed or colored in because its size and its theme are patently obvious. The tattoo is also as minimalist as it is massive.

I have already been wondering what Gaga will be wearing to the 2019 Academy Awards. Now, I am curious how her both her rose and music staff tattoos will interpolate with her gown, which will likely be her most epic and most unforgettable of the awards season.

Gaga has several other tattoos in the back region, including the infamous "monster paw."

Here's a better look at some of her prior ink.

She also has tattoos on her inner arms, which are now joined by the staff and music notes, which were a righted wrong.

That concludes this update on Gaga's body art.