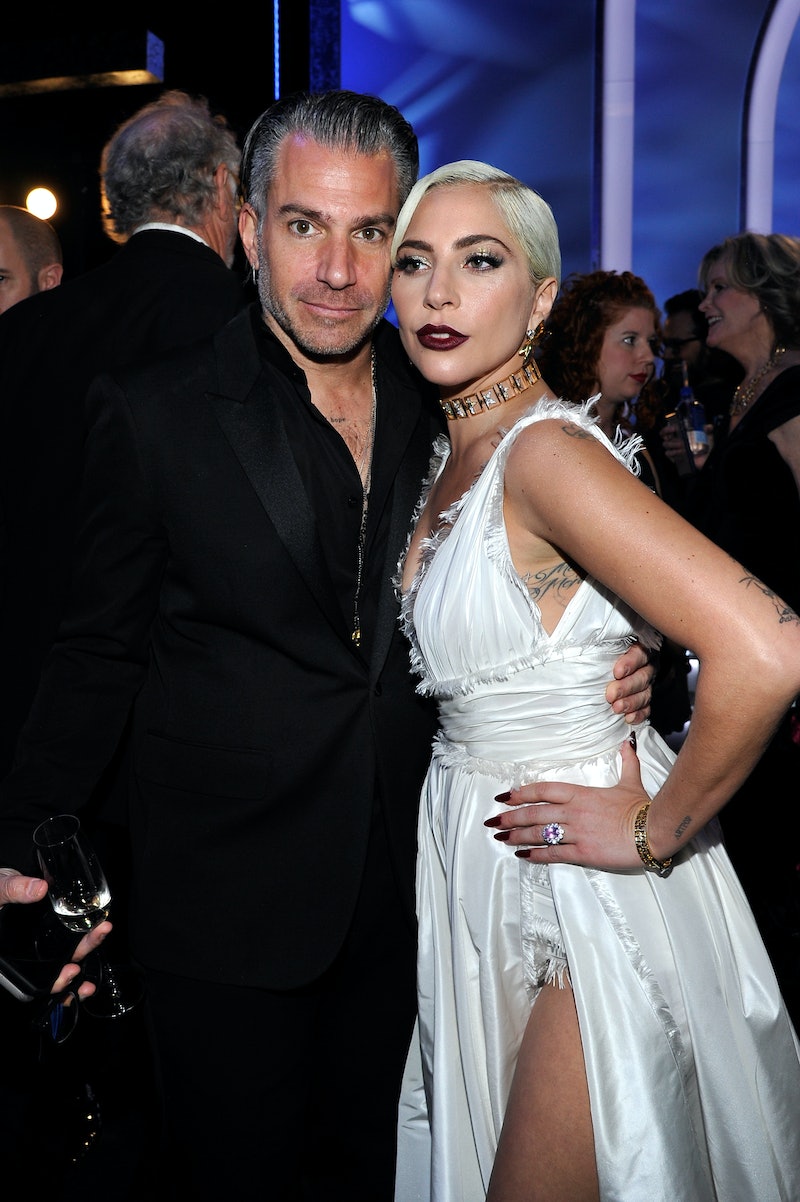 On Thursday, Feb. 14, a new report from E! Online had fans of one Hollywood couple worried. A source told E! that Lady Gaga and Christian Carino have reportedly split, but rumors that the engaged couple are no longer together may be just that — rumors. Two other sources assured E! that Gaga and her talent agent fiancé are still together and simply waiting for this busy period of the singer's life to slow down before wedding planning. (Bustle has reached out to Carino and Gaga's representatives about the rumors, but did not hear back at the time of publication.)

E!'s unnamed source is claiming that the couple split last week, and Carino is "desperately trying to get back together." Meanwhile, rumors about a possible breakup started circulating when the talent agent didn't attend the 2019 Grammys with the "Shallow" singer. She also didn't mention Carino in her acceptance speech, as fans on Twitter pointed out. E! also noted that Gaga didn't wear her engagement ring to the event, but there could be a simple reason behind her choice. "She just wasn't wearing her ring due to performing," a source told the outlet. "They have put all their wedding plans on hold until after Gaga's busy season, but still plan to get married this year."

The couple was last seen together publicly at the 2019 Screen Actors Guild Awards, and they seemed to be happy together at the event. The pair engaged in some PDA, and the singer wore her ring. It's also worth noting that according to E!, Gaga is reportedly not following Carino on Instagram, but he is following the singer. On Feb. 14, Gaga posted photos of her latest tattoo on Instagram. Neither she nor Carino have posted public Valentine's Day messages to one another, but given that they're a private couple in general, this isn't surprising.

Carino did post a photo of Gaga on Feb. 5 with the caption, "'beneath the makeup and behind the smile i am just a girl who wishes for the world' marilyn monroe."

Carino and Gaga were first linked romantically in early 2017. It's unclear how the two met, because they've been committed to keeping their romance out of the public eye as much as possible from the start. For instance, Us Weekly reported that the couple got engaged in November 2017, but Gaga didn't confirm the news until October 2018.

The couple's commitment to preserving their privacy is one reason why rumors of a breakup shouldn't have fans too worked up just yet. There are many reasons why Carino may not have attended the Grammys that don't involve a split, and the same goes for Gaga not thanking him in her speech. Thanks to A Star Is Born, she's been giving lots of speeches this award season, and it's not hard to believe that she may not have realized she didn't mention her fiancé.

Until Gaga or Carino makes a statement — or they show up together at the next big awards event — it's impossible to know whether or not there's any truth to the rumors. But for now, the best thing that fans can do is respect the couple's privacy. Given that only one source is claiming they've split, while at least two others maintain they're still together, there's no reason to assume that Gaga and Carino have called it quits.