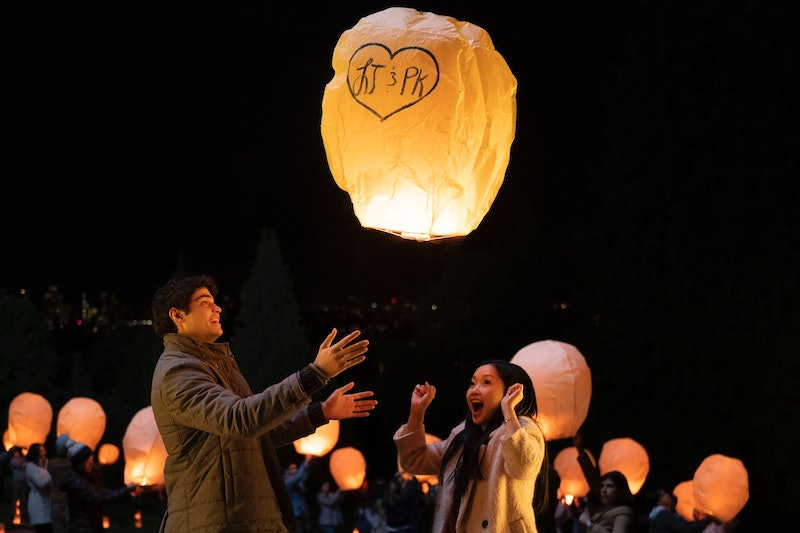 Spoilers ahead for To All The Boys: P.S. I Still Love You. Now that the To All the Boys I've Loved Before sequel has finally hit Netflix, fans are focused on the third film. The second movie ended with Peter and Lara Jean continuing to live out their happily ever after together. But, in an interview published on Feb. 12, stars Lana Condor and Noah Centineo teased Peter and Lara Jean's future in To All the Boys 3 and it sounds like the couple will face even more complications in the future.

College will be a big focus of the third film, as Peter and Lara Jean begin their senior year, and as Condor told Entertainment Tonight it's "the most mature movie" out of all three. She added, "We tackle more real life because there's really no distractions. It's just him and I, and [we] figure it out." In the book, Peter gets a lacrosse scholarship to the University of Virginia while Lara Jean wants to attend the University of North Caroline at Chapel Hill, which causes some confusion, some conflict, and a lot of feelings.

Condor also noted that Lara Jean will continue to make her happiness a priority in To All The Boys 3, even if that means by making "decisions for herself that might be unpopular." She explained, "As a young woman, you have to protect your own heart and make the decisions that are truly right for you regardless of the other people around you."

It will be exciting to see more of LJ and PK's love story, especially after the emotional storyline they explored in the second movie. P.S. I Still Love You saw Lara Jean struggling with her relationship with Peter, and her feelings for John Ambrose McClaren (Jordan Fisher), a dreamy recipient of one of her love letters.

When she wasn't busy deciphering those complex emotions, Lara Jean also worked through her feelings when it came to Peter's past with his ex Gen (Lara Jean's former best friend). It was a difficult journey, and one that found Lara Jean and Peter realizing they wanted to be together, despite their heartbreaking, and thankfully, short split. Now that they're over their jealousy, it sounds like college will be the next big bump in the road.

The cast already finished filming To All The Boys 3. And, fans should brace themselves for another romantic roller coaster. In the words of Centineo, fans "ain't ready for the third movie."