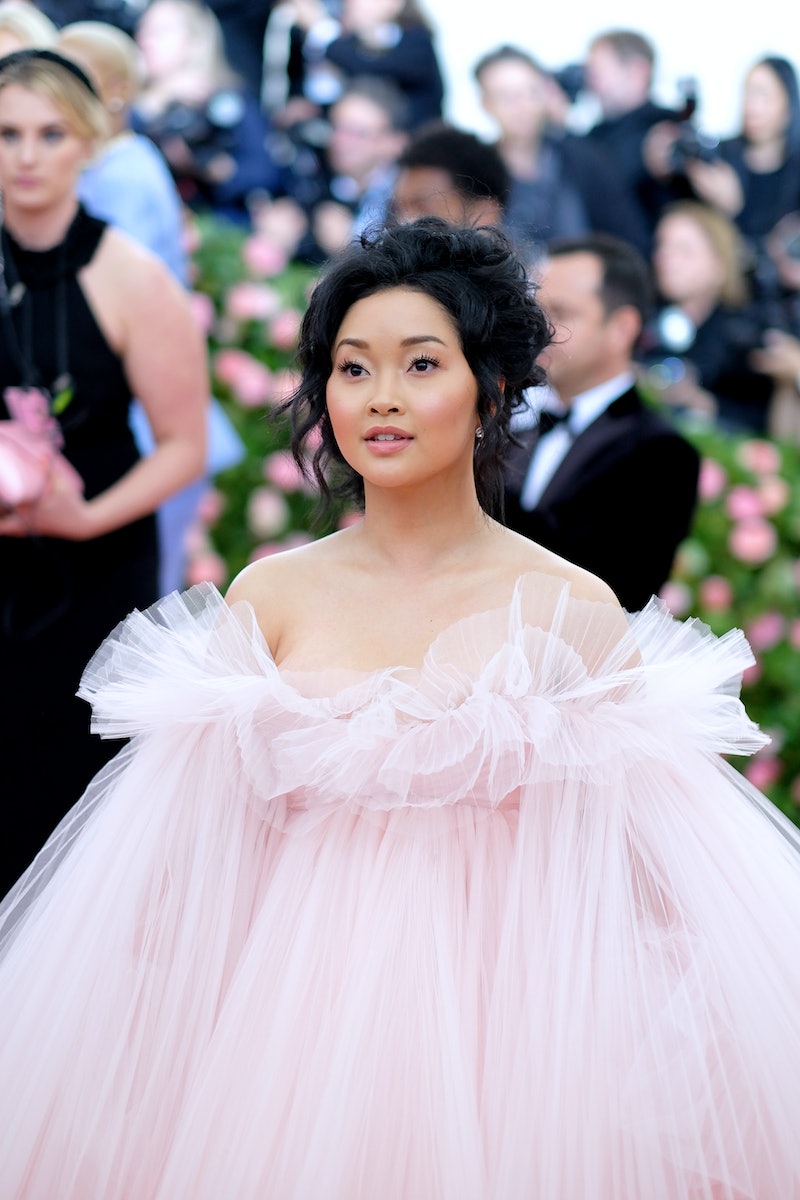 Lana Condor knows how to work a red carpet, especially one with a great theme. For the biggest night in fashion, Lana Condor's outfit at the 2019 Met Gala was a bona fide showstopper. The actor's incredible gown looked like a gigantic ballerina's tutu and delicious cotton candy all in one. This was Condor 's first time at the iconic Met Gala — and she certainly made a fluffy pink appearance to remember.

In the past year, Lana Condor has solidified herself as a style star to watch. The actor, who had a breakout role in 2018 as the lead in Netflix's To All The Boys I've Loved Before, was known for her quirky schoolgirl style in the popular film. Yet, on the red carpet, Condor has become a young star to watch, testing out countless styles and abandoning any means of fashion predictability. From bold dark-lipped beauty looks to simple and elegant glam, the 21-year-old can rock any style with effortless ease. And that fact was proved during her first Met Gala.

The actor rolled up to the the first Monday in May's grand Camp festivities dressed like a prima ballerina — or your favorite fluffy carnival snack. For the Met, Condor wore a light pink tulle gown that was both voluminous and unabashedly feminine. With exposed shoulders and a high-low silhouette that evolved into a perfectly puffed train, Condor's gown was frilled, layered, and full. Even the actors hands were buried in layers and layer of light cotton candy-like fabric.

Condor didn't get lost in the gown though. Not a chance. The super-short front of the ensemble showed her legs and heels, breaking up the tiered layers of tulle.

The actor wore a simple beauty look to ensure all eyes were on her glamorous gown. Condor went with simple fresh-faced glam that was elegant, yet balanced with the grand designer duds. Her cheeks were perfectly pink, echoing the hue of the graceful gown.

The film star wore her hair pulled back in an elegant updo, with tendrils framing her face to also aid in letting the gown speak literal voluminous volumes.

"The dress did most of the work, so we wanted romantic-camp — or “RoCamptic" — hair vibes," says stylist Mat Fugate, who used Dove products on Condor's hair. "The texture and perfectly disheveled mess of heaven played its part beautifully."

Add on diamond earrings by Lark & Berry London to accentuate her exposed shoulders, and you have yourself a Campy — yet feminine — look.

With both smart restraint and grand gaudiness, Condor took on the Met Gala's Campy theme with the starlet style she's become known for in the past year. Whether you think the look resembles delicious cotton candy or an elegant ballerina tutu, we can all agree that Condor came to slay — and succeeded.

In the past year, Condor has been a fashion chameleon with a forceful sartorial showing on each and every red carpet she graces. Her certified #lewk for the Met Gala was certainly no exception, proving Condor can capture attention with her talent and her style spark.

Now go prance around to ballet music or down loads of sugar in tribute to Condor's fluffy pink look and her first Met Gala. It's really your call.