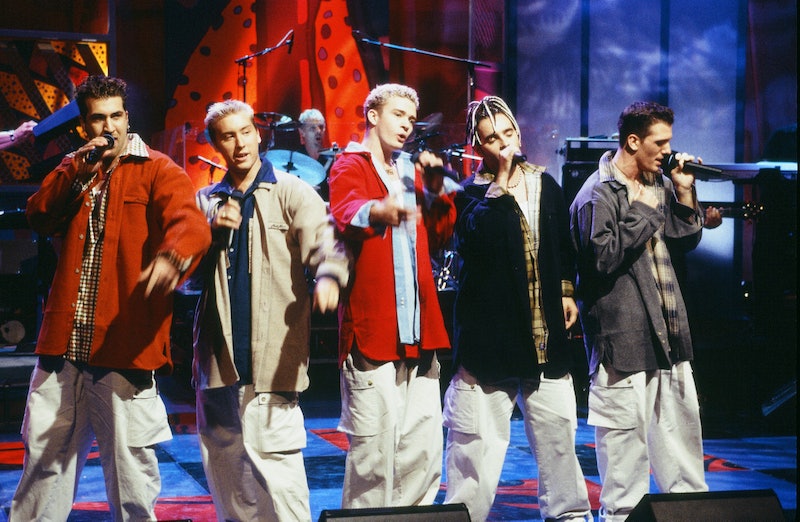 Don’t say bye, bye, bye to all reunion possibilities: Lance Bass said an *NSYNC reunion is something the band has "been talking about." Ahead of the 20th anniversary of *NSYNC’s No Strings Attached album on March 21, Bass said a potential reunion with former boy band members Justin Timberlake, JC Chasez, Chris Kirkpatrick, and Joey Fatone would “be for the fun of it” if it were to happen.

“We’ve been talking about it. No plans have been made,” Bass told Variety on March 16. “If there will even be plans, who knows?” He added, “I think if we did anything, it would be for the fun of it. The world needs something fun to listen to and I think we could bring some positivity to it." Adding that it could be “something simple to test it out,” Bass said, “If it works, it works, and if it doesn’t, it doesn’t.”

As for how his former *NSYNC bandmates feel about a reunion, answers will soon emerge on Bass’ podcast, The Daily Popcast with Lance Bass. To commemorate the anniversary of No Strings Attached, Bass will interview each of his former bandmates as part of a weeklong segment dubbed as “*NSYNC week.” Titled “The *Nterviews,” the first two episodes feature Kirkpatrick and Chasez and have since dropped on March 16 and 17, respectively.

In Bass’ inaugural *Nterview, Kirkpatrick remained vague on reunion possibilities. After he joked that it would occur in “a few months,” Fitzgerald offered listeners a more indefinite answer and told Bass, “I believe that we’ll all do something together again someday.” Bass replied, “The door is always open.” Chasez also remained elusive in his episode. When asked if the *NYSNC door is “closed” for him, Chasez told Bass, “Circumstance is everything. You can’t deal in absolutes.” He added, “All I know is everyone is asking for a reunion and there isn’t one today, except we’re sitting here talking into microphones.”

*NSYNC last reunited at Coachella 2019 sans Timberlake, who had just finished his Man of the Woods tour the night before. Bass, Kirkpatrick, Chasez, and Fatone got together alongside Ariana Grande to perform “Tearin’ Up My Heart,” “It Makes Me Ill,” and “Break Up With Your Girlfriend.” Fatone shared a selfie after the performance on Instagram and wrote, “Thanks @arianagrande for having us ... was a great time and a chance to perform with my brothers once again.”