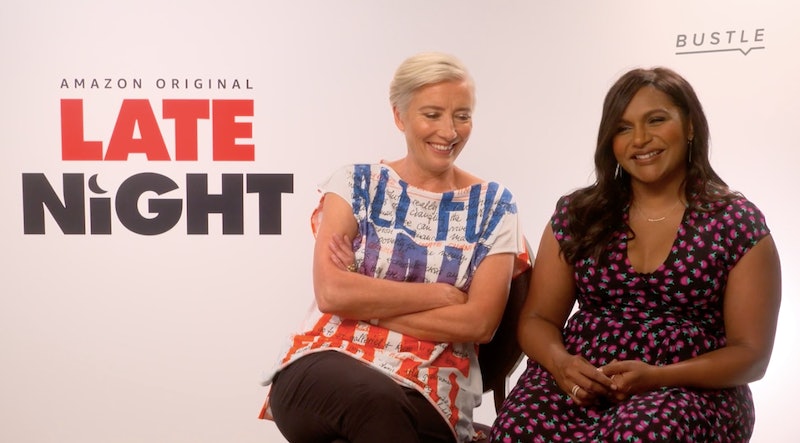 In upcoming comedy Late Night, talk show host Katherine Newbury (Emma Thompson) faces a diversity problem, plus a dive in popularity after years on top. In desperation, her show hires a "token" female writer, Molly (Mindy Kaling), a completely inexperienced aspiring comedian, expecting she'll get herself fired soon enough. Molly's fresh take actually boosts ratings, but with the show still on the chopping block, both have a lot to learn from each other to keep their comedy dreams alive. While Late Night might not take place in an everyday work environment, where there are coworkers, there's always office drama. So, at the movie's London press junket, Bustle enlisted the stars of Late Night — opening in select cities this Friday and wide on June 14 — to offer some advice for dealing with those awkward moments that tend to happen at work.

Thompson and Kaling field answers to some of the most embarrassing and infuriating workplace scenarios, from mundane yet surprisingly common office supply snatching to accidental reply-all disasters. Though theoretically all office supplies are there for the benefit of the larger group, people get surprisingly territorial about pens, notepads — an entire subplot of 1999 comedy Office Space centered around beleaguered Milton's freakout over losing his beloved red stapler, as you probably recall. While Thompson expresses faux-outrage, Kaling says it's a perfect setup for her favorite kind of confrontation: direct, dramatic, and wildly low-stakes.

In an interesting coincidence, both Thompson and Kaling found themselves somewhat mirroring their onscreen counterparts. Molly's overenthusiastic, untested writer wants to learn at the feet of a trailblazer. Kaling, while much more experience, wrote Late Night's prime role sight-unseen for Thompson. As The Hollywood Reporter notes, Kaling said on The Ellen Degeneres Show, "It was a stupid thing to do. I'm in L.A. creepily writing this movie about a woman I was a fan of. She's hilarious and never gets to do funny parts. She just turned 60, and I was excited to see her in this kind of role." Kaling also mentioned, much like Molly in the all-white, all-male writers' room, having to constantly explain her presence at fancy events. "I think I have a nice career and I'm doing well. But the minute I go to the Met Gala, I'm the least famous person there. Everyone is a European billionaire who doesn't watch American sitcoms, and... I have to explain my deal to them. They don't get it."

Meanwhile Thompson found herself going through some of the stress her fictional counterpart deals with. Talking to The New York Times, she mentions that turning 60 left her feeling uncertain, though not about aging itself. "The denial of aging is unhealthy. It’s always been bollocks,” she said, in no uncertain terms. But, "there’s lots of these roles that are in fact imposed on you by society, for years and years and years, then you suddenly go — am I any of those things?" Thompson mused. “I was always so sure. As it turns out, I have no idea.”

The one thing both women do feel certain about is what they'd do if they pulled a mistake like accidentally calling the boss Mom or Dad. While Thompson says she'd have to immediately leave work forever, Kaling says she's already so unprofessional it likely wouldn't phase any coworker. When it comes to office rumors though, both agree they'd immediately confront the problem directly and loudly, something the film Late Night looks to do when addressing women and diversity in the workplace.