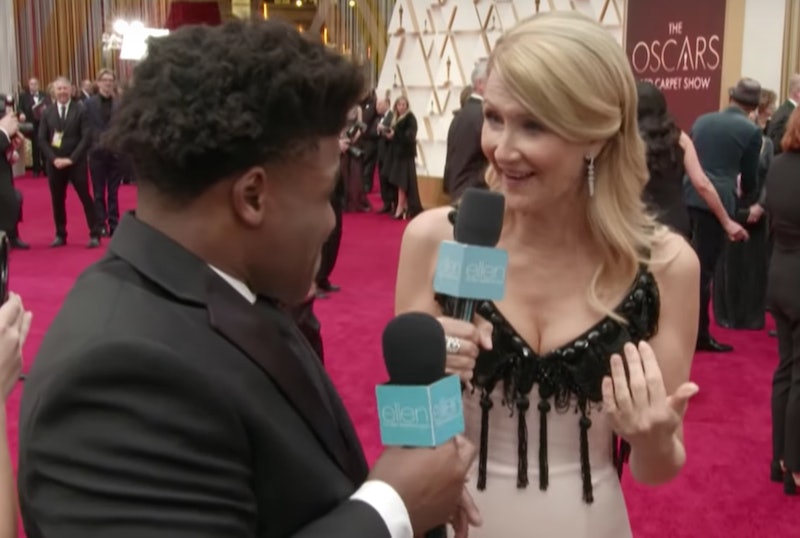 Oscar nominees count themselves as members of the Jerry Hive, too: Laura Dern mat talked Cheer’s Jerry Harris on the Oscars red carpet on Sunday. The breakout star of the Netflix cheerleading competition docuseries served as a correspondent for the Ellen DeGeneres Show and interviewed some of the biggest names in Hollywood. While he dubbed Once Upon a Time in Hollywood star Brad Pitt as the “coolest man in the world,” Harris’ presence alone excited the famous attendees all the more — and even prompted Dern to put her own spin on his signature mat talk.

“Jerry! Jerry! Jerry! This is what I want to say to you,” Dern said as she approached Harris on the red carpet. “You’ve got this! You can do this, Jerry!” She added, “My daughter was giving me some mat talk as I was driving in the car; and we love you. And we love your big beautiful heart.”

Elsewhere in the segment, another moment has captivated Jerry stans: Gerwig, nominated for Little Women, excitedly approached Harris and exclaimed, “Oh, my God! I watch your show while I’m pumping every night!” She added, “I don’t know what’s going to beat this moment right now. I feel like I manifested you in front of me.” Later, Harris, confused about Greta’s usage of “pumping,” had to be told that it was in reference to breast pumping for milk. “Oh!” Harris said, laughing. “That’s insane. I never heard — that’s definitely a first.”

Harris’ correspondent gig comes a few days after Navarro coach Monica Aldama surprised the affable cheerleader with the news on Ellen’s social media. “We told @jerry.h.arris from #CheerNetflix that he was going to be our red carpet correspondent at the #Oscars,” DeGeneres captioned an Instagram post. “His reaction was priceless.” In the clip recorded and narrated by Aldama, Harris couldn’t contain his emotions upon learning that he’d be interviewing stars on the red carpet.

Watch Harris interview celebrities on the Oscars red carpet above.

More like this
Here’s Everything Coming To & Leaving Netflix In February
By Jake Viswanath
Ashton Kutcher Wants Danny Masterson “To Be Found Innocent” In Rape Retrial
By Jake Viswanath
'The Queen’s Gambit' Season 2 Tweet Wasn’t From Anya Taylor-Joy
By Mary Kate McGrath, Jack Irvin and Grace Wehniainen
'The Crown' Season 6 Has Suspended Filming "Out Of Respect" For The Queen's Death
By Bustle Staff
Get Even More From Bustle — Sign Up For The Newsletter
From hair trends to relationship advice, our daily newsletter has everything you need to sound like a person who’s on TikTok, even if you aren’t.