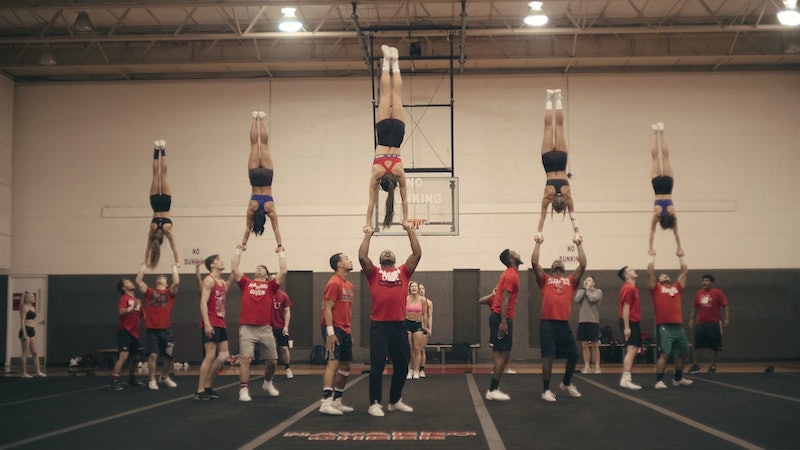 Calling all Jerry stans: Cheer, Netflix’s hit competitive cheerleading docuseries, might be over, but where Netflix has failed us, YouTube succeeds. These behind-the-scenes Navarro cheer videos at Daytona are basically brand new episodes. Cheer, which debuted in early January to plenty of online fanfare, follows a group of competitive cheerleaders at Navarro College as they prepare to regain their title at the NCA National Championships in Daytona. Led by the indomitable cheer coach Monica Aldama, the six-episode series pulled back the curtain on the extensive ups and downs of the competitive sports realm occupied by lovable student athletes.

The documentary introduced viewers to breakout stars Jerry Harris, Gabi Butler, Morgan Simianer, Lexi Brumback, and La’Darius Marshall. The athletes have each racked up a massive social media following on the heels of the show’s premiere. And they're putting it to good use. Given there’s still a hunger for Cheer content, Butler and fellow Navarro cheerleader Justin Hinsley have taken to YouTube to share behind-the-scenes footage from the Daytona Nationals.

“So excited to relaunch my channel with this first vlog video showing some of the behind the scenes of Day 1 at Daytona Nationals with my team Navarro,” Gabi captioned her video, re-uploaded on Jan. 13.

Justin also shared a personal vlog of the competition on his YouTube channel. “We literally decided to vlog right before getting on the plane to leave,” he wrote. And the combo of both give way more insights into how the group prepared for the competition otherwise not seen in the docuseries, including meditations at the beach and surprise family reunions. In an emotional moment from Gabi's vlog, her sister surprises her in Florida, while Justin's vlog covers more spontaneous moments at the team’s hotel and airport.

On her own YouTube channel, Monica shared a look back at the 2018-2019 Navarro squad. The photo compilation includes snapshots of Cheer’s beloved cheerleaders bonding poolside, preparing to compete, executing their routine at Daytona, and ultimately taking home the trophy.

If these behind-the-scenes clips aren’t enough to pacify fans, the cast of Cheer are on Instagram to quell all needs of Bad Girls Club reenactments and positivity.

More like this
Here’s Everything Coming To & Leaving Netflix In July
By Grace Wehniainen
Move Over, 'Sunset'! The Drama-Filled Trailer For 'Selling The OC' Is Here
By Nola Ojomu
What That Ominous 'Selling Sunset' Season 5 Finale Could Mean For Season 6
By Orla Pentelow and Brad Witter
How To Apply For Netflix's Real-Life 'Squid Game' Reality Show
By Radhika Menon
Get Even More From Bustle — Sign Up For The Newsletter