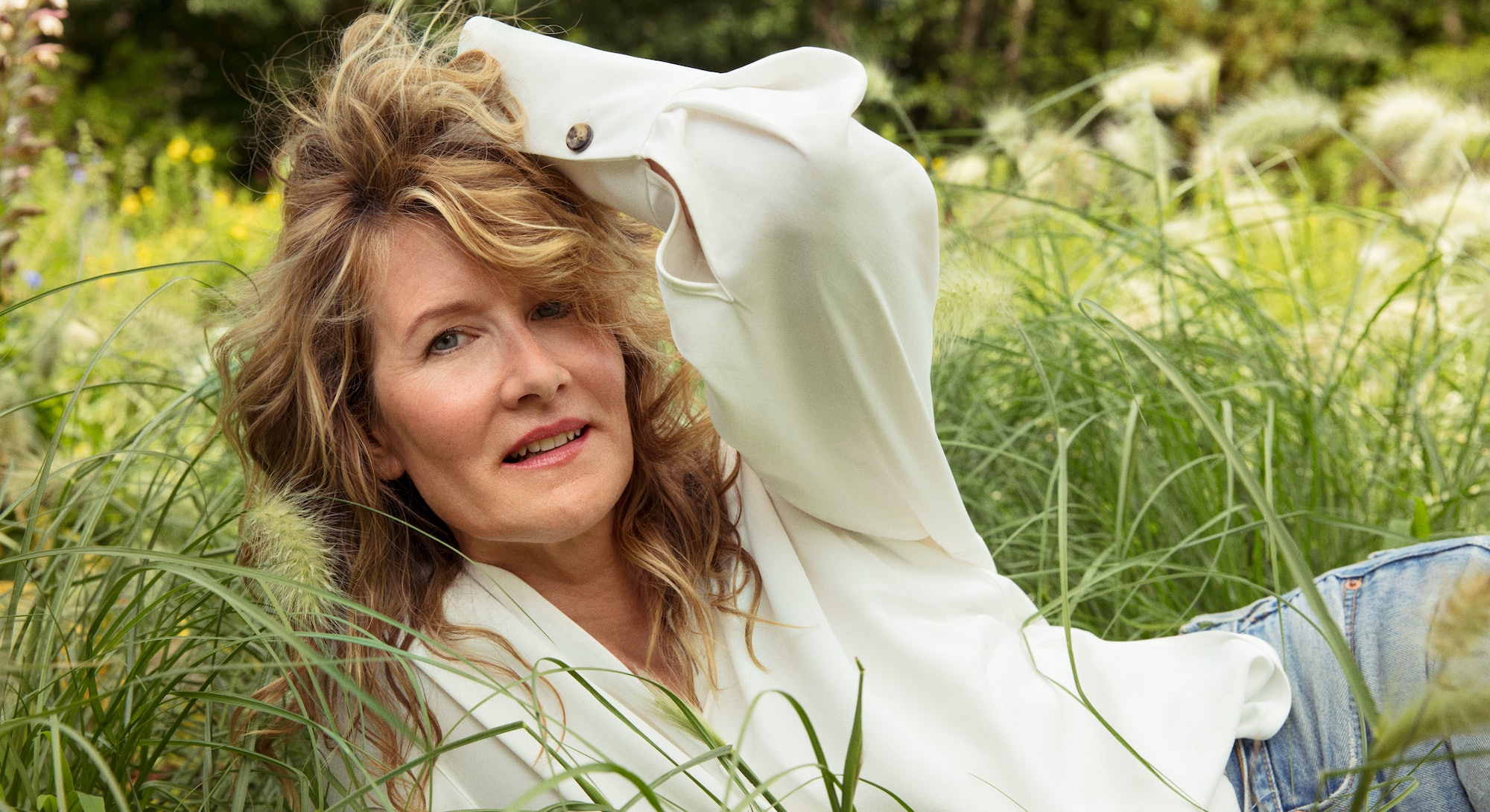 Laura Dern is a woman of great passion. You've see it on screen, when she's channeling the tenacious Renata Klein on Big Little Lies, pointing her finger fervently into a glass window proclaiming she will "not not be rich." Or digging her arm into a massive pile of Triceratops dung as the brilliant and intrepid paleobotanist Dr. Ellie Sattler in Jurassic Park. Perhaps less evident is her passionate work off screen. Dern has been a long-time environmentalist and activist for much of her life, raising awareness about how toxic substances can affect children's health as a spokeswoman for Healthy Child Healthy World. Most recently, Dern has teamed up with True Botanicals, a leader in non-toxic, and eco-friendly beauty, to spread the word about its latest movement Truth Revealed alongside fellow actors and advocates Olivia Wilde and Zazie Beetz.

But Dern's passion for the brand didn't just stem from its commitment to making the world a cleaner and safer place. To be honest, her love story with True Botanicals started the way most people's obsessions with a brand start — one really great product that made her look good.

"I fell in love with the company, having no association with them, [when] their Radiant Face Oil [was] used on me when I was making the first Big Little Lies," Dern tells me at a press event in Los Angeles to celebrate Truth Revealed. "[I] started using it and people started complimenting my skin and I realized, my skin was changing. And the quality of my skin looked different on film, so it was a purely surface reasoning in its origin," she says, adding that friends were asking her if she got a facelift because that's how good her skin looked. (Dern also confirmed the oil was how Renata got her glow in Big Little Lies.)

It may have been love at first sight, but the more she learned about True Botanical's integrity, how they honored the Made Safe requirements (an organization that screens products and ensures they are made with ingredients not known or suspected to harm human health, animals, or ecosystems) and packaged their products in glass, Dern's love for the brand grew deeper. She met Hillary Peterson, the founder of True Botanicals, and realized the brand was trying to start an even bigger conversation and she wanted to be a part of it.

At the event, Dern addresses a crowd of beauty editors and influencers over a breakfast of avocado toast and lavender lattes, hoping to remind us that we have the right to ask for safety information about the ingredients in our beauty products.

This is why Dern feels so passionately about True Botanicals. "In the case of [this brand] Hillary and the chemist she works with, they've done the research for us. We can literally know, given the Made Safe label, that they've done more research than anybody else, so everything we're using is great. You get to explore because you know it's safe," she adds.

So explore, Dern did. After finding the Radiant Face Oil, she began to play and experiment with other products from True Botanicals, like their Pre Cleanse Oil, which she discovered works incredibly well as an eye makeup remover.

"I have really sensitive eyes and I'm always trying to find the most sensitive eye makeup remover and I found this pre-cleanse oil. No one had ever told me that this could be an [eye makeup remover] but then I thought, I use coconut oil, but it can be a little grainy to take eye makeup off — maybe I can try this because it's so clean and thin and smooth," Dern tells me. Now, it's the only thing she uses to remove her mascara at the end of the day. "It works so well, it doesn't hurt my eyelashes, and my eyes look better in the morning instead of irritated," she says.

Soon after, she became infatuated with the brand's Renew Nutrient Mist. Dern tells me she keeps a bottle in her car, sprays her kids with it (her 18-year-old son carries one in his backpack), and that she even got her mother, Diane Ladd, hooked. "My mom's been visiting me the last few days so I'm spraying it on her and to quote in her Mississippi accent, [she said,] 'Oh my God, you gotta get me a bottle of this!'," Dern tells me.

It's the least she could do for Ladd. After all, her mother was the one who taught her about beauty in the first place. Dern tells me that while her mom was "unfortunately unaware" of how many chemicals there were in some of the products they used in the '70s, it was Ladd who encouraged her to stay away from commercial products that were likely toxic and question "big pharma as a kid." But when it came to skin care, Dern's grandmother was her icon.

"My grandma believed in skin care as beauty, so she would leave the house with literally just face oil, so her face was nice and glowy and healthy. She'd use a little bit of mascara and her red lipstick and that was it. I just have never thought there was anything more beautiful — it was just pretty skin and a lipstick," Dern shares. This simple beauty philosophy is one that Dern continues to live by, though she doesn't typically go too bold when it comes to her lipstick. Just ask her co-star and BFF Reese Witherspoon.

"Reese and I are best friends and we have a running joke about lip color because she's very lip color and I really like a neutral. One time, she had a gorgeous hot pink lip and I had some champagne-y neutral, sexy warm taupe-y color I was so proud of and she was like, 'I need to touch up my lipstick, do you have a lipstick in your purse?' And I pulled it out and she was like, 'Dern, that's not lipstick!' We've had that running joke forever," she laughs.

Though Witherspoon may not be able to rely on her best friend for a punchy lip color, she could steal a refreshing spritz of Dern's mist that's likely stashed in her purse. "I'm rabid for that spray," Dern says.