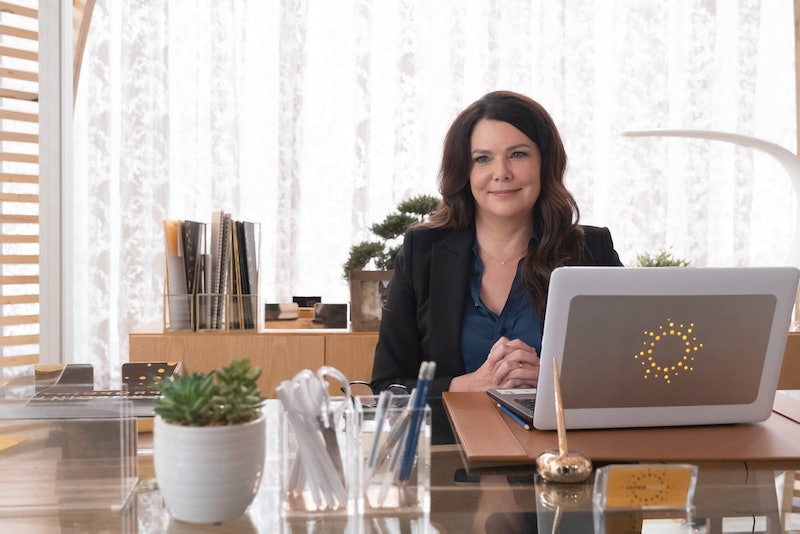 Lorelai from Gilmore Girls is finally back on TV — well, kind of. Lauren Graham's Zoey's Extraordinary Playlist character is the protagonist's no-nonsense boss, Joan, but other than the fact that they're both managers, that's where their similarities end. In fact, Joan is actually more of an Emily (but don't tell Lorelai) as you can see in the exclusive clip below.

The series, which premieres Jan. 7 at 10 p.m. and returns Sunday Feb. 16 with a repeat of the premiere episode at 8 p.m and a new one, follows Zoey (Jane Levy), who acquires a bizarre superpower when she goes in for an MRI. Now, she can hear everyone's innermost thoughts — even worse, they're expressed through song. Hence, the titular extraordinary playlist (which should not, by any means, be confused with Nick and Norah's Infinite Playlist!)

Through these involuntary serenades, which somehow only she can hear, Zoey discovers that her best friend (Crazy Ex-Girlfriend alumnus Skylar Astin) is actually in love with her. Mere strangers begin serenading her in coffee shops, and her professional rival performs an aggressive anthem to psych the coder out. But this also means that Lauren! Graham! Sings! In! This! Show! Which may honestly be enough of a draw for many Gilmore Girls fans — especially if Lorelai singing "I Will Always Love You" to Luke really did it for them.

Since Zoey works at a tech company, their office is sprawling. Chairs look like pieces of modern art, and Joan's office is inside what looks like a 20-foot, wooden installation. See, Zoey is up for a promotion to manager of engineering, and the below clip depicts an incredibly uncomfortable interview she has with Graham's character.

Musical numbers aren't necessary to depict the palpable boss-employee dynamic between them. Not only is Joan an intimidating presence, but Zoey is clearly uncomfortable with their formal conversation. Before getting called in, she asks her friend Max (Astin) what Joan's mood looks like to him. "Uh, I'm gonna say all the moods?" he responds. "Your guess is as good as mine."

All the moods seems about right. Joan is impatient, writing her pilates instructor an angry message in the middle of their conversation. When Zoey's boss asks for a ballpark statistic on how much work she personally contributed to a recent project, she ad-libs, "Six...ty...four." Nailed it.

"Technical accomplishments aside, what makes you think you would be a good manager?" Joan asks. "Are you an effective communicator? Do you think you can get others to follow your lead? Are you comfortable being the bad guy?"

"Well, I'm not really comfortable with anything," Zoey answers, slyly. "That's why I became a coder." It's the wrong time for self-deprecating jokes, and her boss simply looks at her in response.

But while Zoey didn't exactly crush her interview, perhaps her quality of work is enough to grant her the managerial position. Whatever the case, her dynamic with the formidable Joan looks to be one to watch this season on Zoey's Extraordinary Playlist.