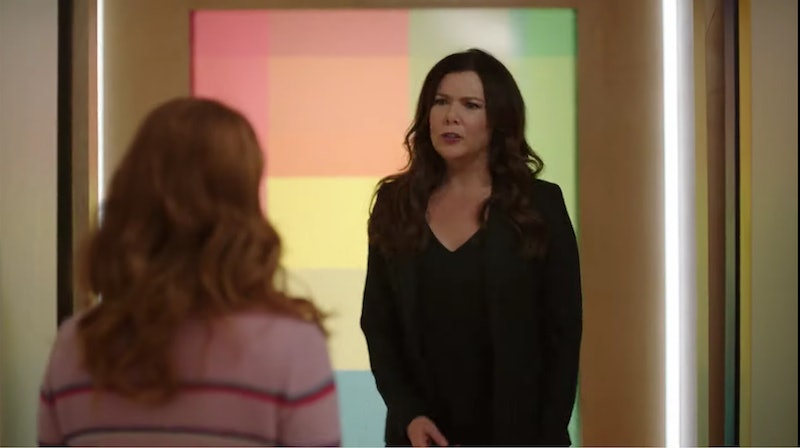 If you've been waiting your whole life to see Lorelai Gilmore belt out The Rolling Stones in a public bathroom, NBC is here to answer your (very specific) prayers. Lauren Graham sings in the first trailer for Zoey's Extraordinary Playlist, the upcoming musical sitcom about a young woman who discovers that she can hear people's thoughts via song after an MRI goes wrong.

Jane Levy stars in the Glee-esque sitcom as Zoey, a coder who "always preferred podcasts to pop songs," per Deadline's description, who attempts to use her new ability to "connect with the world like never before," now that she can hear the popular songs in everyone's head. "One second I'm getting an MRI and the next second, people are singing to me," Levy's character explains at one point. "Almost as if they're singing what they're thinking out loud."

However, Zoey's newfound power is causing her some problems along the way; namely at work, where she keeps finding herself getting "distracted" by everyone's singing, even though she's up for a major promotion. And though her boss, Joan (Graham) is on her side, it's hard not to see why Zoey is finding it so hard to concentrate, especially when Graham is singing a version of "(I Can't Get No) Satisfaction" — complete with impromptu wind machine made out of hand dryers.

Of course, Zoey's ability to hear people's "songs" isn't just causing her problems at work, but also throwing a wrench into her personal life. "Because of whatever this ability is, I've discovered that my best friend is in love with me," Zoey declares, before Skylar Astin's Max serenades her with both "Sucker" by the Jonas Brothers and "I Think I Love You" by the Partridge Family. In addition to Graham and Astin, Levy is joined by Broadway star and Glee alum Alex Newell as Mo, Zoey's musically-adept neighbor and Patrick Gallagher and Mary Steenburgen as her parents.

Zoey's Extraordinary Playlist marks Graham's first TV show since Parenthood wrapped in 2015 after six seasons, and the Gilmore Girls revival on Netflix the following year. The show is also Graham's first musical role on television, though she played the ditzy, chronically congested Miss Adelaide in the 2009 Broadway revival of Guys and Dolls. "I have such reverence for New York theatre," Graham told Playbill in 2009 about making her musical theater debut. "My dad began taking me when I was a kid, and it's what I grew up dreaming about doing."

It seems like Graham jumped at the chance to star in another musical when Zoey's Extraordinary Playlist came around, as the actor joked on Twitter back in August that it was not hard to convince her to take on the role of Joan. "1. It’s a musical, and 2. Ive heard enough what day do we start," Graham wrote on Twitter, enumerating her reasons for joining the show. "Thrilled to join [Jane Levy] on this incredible show!"

According to Deadline, Graham is contracted to star in Zoey's Extraordinary Playlist for one year, which means that any potential future seasons of Gilmore Girls will have to wait for a little while longer. In the meantime, fans can fill the void that Stars Hollow left in their hearts by watching Graham live out her musical dreams when Zoey's Extraordinary Playlist premieres on January 7.

More like this
Hilary Duff's Husband Matthew Koma Has Her Name Tattooed On His Butt
By Jake Viswanath and Stephanie Downs
Cruz Beckham Teased New Music With An Adorable Nod To Mom Victoria Beckham
By Stephanie Topacio Long
Britney Spears Shares & Deletes Photos Of Justin Timberlake From 22 Years Ago
By Jake Viswanath
This 'Gossip Girl' Wardrobe Error Has Gone Viral On TikTok
By Alyssa Lapid
Get Even More From Bustle — Sign Up For The Newsletter
From hair trends to relationship advice, our daily newsletter has everything you need to sound like a person who’s on TikTok, even if you aren’t.