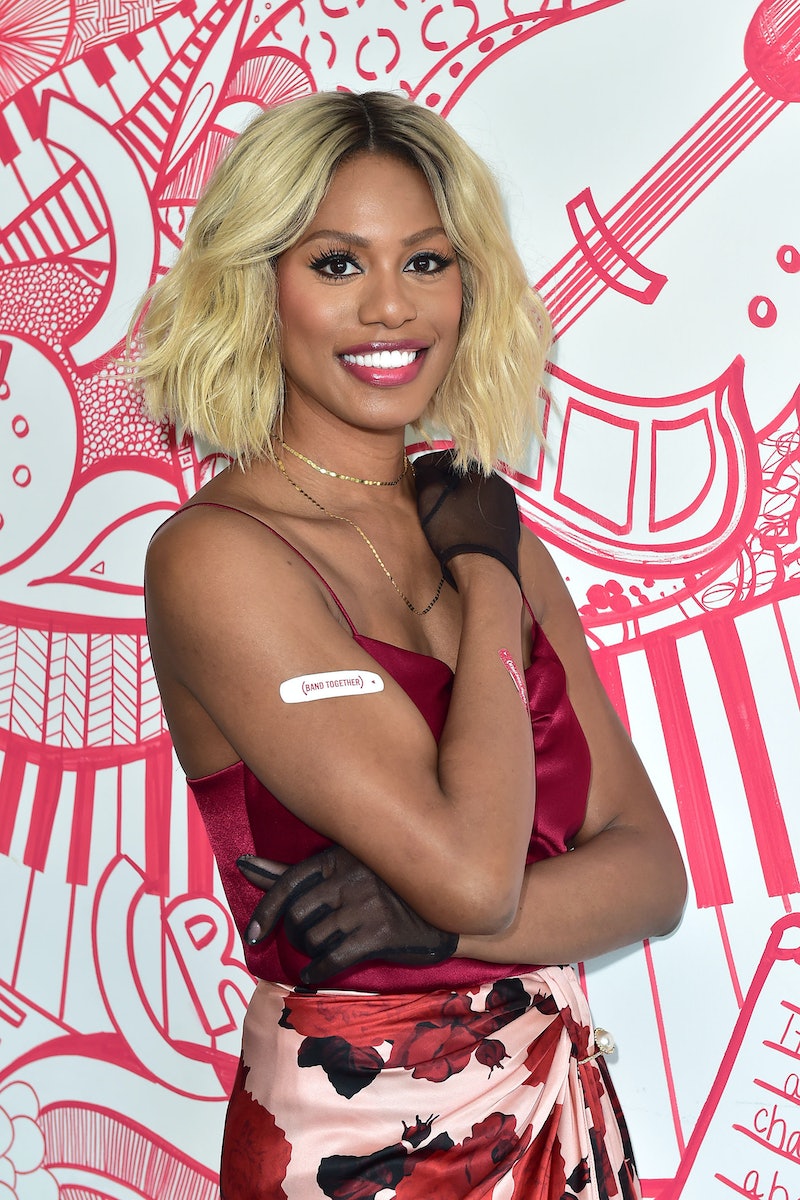 Ever since she was a teenager, actor Laverne Cox says she's felt the impact of HIV/AIDS stigma. She tells Bustle she grew up as part of the LGBTQ community during a time when the language surrounding HIV/AIDS was extreme and scary, and it in part shaped how she thought about herself and her sexuality.

"Imagine you go through puberty, and you realize that you have sexual feelings, and you think if you have sex, you're going to get AIDS and die," she says. "That was in the back of my head for years ... that if I'm sexual, then that means I deserve to die."

Intellectually, Cox, who rose to fame playing Sophia Burset on Orange is the New Black, says she knew that wasn't the truth. But she still felt the stigma associated with the virus when people would falsely assume she's HIV positive because she's trans. Though HIV can be managed with medication, the stigma associated with it can have separate effects on social and physical wellbeing. People with HIV can be socially ostracized, face discrimination in health care, and have a higher risk of mental health conditions, often because they've also experienced other trauma in their lives, according to the Centers for Disease Control and Prevention. That stigma, when internalized, can prevent people from getting tested and treated for HIV.

"We have to talk about the stigma around it," Cox says. "That stigma puts so many of us in this constant fear."

That anxiety Cox felt thanks to fear-mongering language around HIV/AIDS, combined with the trauma of losing close friends to AIDS, have motivated her to foster conversations about HIV/AIDS and stigma. For World AIDS Day on Dec. 1, Cox has partnered with BAND-AID and (RED), which raises money for The Global Fund to Fight AIDS, Tuberculosis, and Malaria. Buying one box of (BAND-AID) RED bandages provides a day's worth of medication for someone with AIDS in sub-Saharan Africa.

By partnering with (BAND-AID) RED to raise awareness, Cox hopes to help end what she says are two big misconceptions about AIDS: first, people think it's "done," or that it's been mostly eradicated, though 38 million people globally live with AIDS. Second, that people often think they can't do anything about HIV/AIDS, but they can. In addition to giving to organizations like The Global Fund, people can help break down the persistent, harmful myths about the condition. The (BAND-AID) RED bandages are just one "opportunity to continue to have conversation around stigma and shame around HIV and let people know that this is still an issue," Cox says.

People with HIV/AIDS can live long, healthy lives thanks to advances in antiretroviral treatment, which can also make the virus undetectable and untransmittable. Prevention medications are also incredibly effective. Though rates of HIV/AIDS have been steadily declining, they are still high among LGBTQ+ people, especially for gay and bisexual Black men and Black trans women. In 2016, 1 million people died of HIV-related illnesses, according to the World Health Organization, and half of those deaths occurred in sub-Saharan Africa.

Though activists and organizations like the Global Fund have made efforts to reduce transmission and the stigma associated with HIV/AIDS, it's often still present even just in the way we talk about the condition. Cox says AIDS activist Jeremiah Johnson pointed out to her that when people ask about someone's HIV status, they often ask, "Are you clean?" which "implies then if someone is HIV positive they're dirty," Cox says. (RED) suggests instead phrasing the question, “Do you know your status?” because "it’s factual and also points to empowerment through knowing one’s status — positive or negative."

Stigma is often present in systemic ways as well. Nineteen states have laws that require people who are aware that they have HIV to disclose their status to sexual partners, according to the CDC. The American Psychological Association and other medical experts oppose the laws, because though they're meant to decrease transmission, they can discourage people from getting tested or seeking treatment. Poor sexual education and lack of access to adequate health care also leads to misinformation about HIV/AIDS. People who disclose that they are HIV positive may also face violence from partners.

The effects of stigma and fear surrounding HIV/AIDS are compounded for trans women of color, who face incredibly high rates of violence. Cox tells the story of a friend who went on a date with someone who didn't know she was trans — once her friend told her date she was trans, he was immediately anxious about whether she was HIV positive. "Our transness can make us undatable for some people, but then the assumption that we are also HIV positive makes us undateable," Cox says.

The false assumption that HIV positive people are not safe to date is one of the many myths Cox hopes to help break down through conversations that she says projects like the (BAND-AID) RED campaign can help start. "Telling our stories, talking about the things that we're afraid of and that we've internalized with people who have earned the right to hear those stories can be really deeply healing," she says.

Ultimately, Cox says conversations about HIV/AIDS and LGBTQ+ people become conversations about love. "When we perpetuate stigmas around people who are HIV positive, and then you make assumptions about people who are in the LGBTQ+ community — this space of being unlovable and not worthy of love is often underlying all of that," she says. "I just want trans people to know that they're lovable. I want everyone out there who's living with HIV to know that they're lovable and that they are worthy of love."