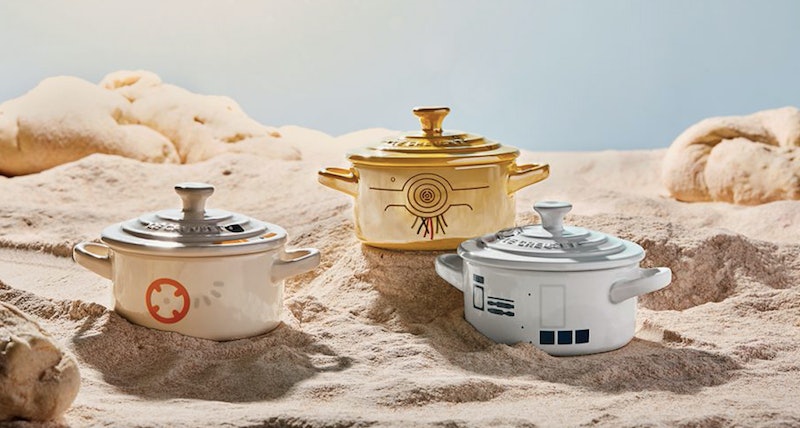 While we were all sitting here squabbling over whether Rey is gonna turn to the Dark Side or not in the upcoming Star Wars: The Rise Skywalker (which comes out in precisely 77 days, not that anyone here is obsessively tracking without regard for the rest of the moving world), a culinary collab with the power to change the galaxy was in the making. Le Creuset announced a Star Wars collection that will launch on Nov. 1 of this year, paying homage to films in all of the iconic trilogies. We’ve got porgs that help us make pies, we’ve got BB-8s you can make mac and cheese in — we’ve even got a Darth Vader Dutch Oven, which honestly are four words I’d never expect to type in sequence unless I was referring to some kind of edgy Gen Z e-cig trend. What a time to be young and geeky and love to eat food!

Come Nov. 1, the line will be available to purchase online, in Le Creuset Signature Boutiques and Outlet Stores, and Williams Sonoma locations. But fans should be warned — unlike all the stormtroopers in the clone wars, this limited edition collection will not be reproduced. And considering that the pieces from Le Creuset are built to be as timeless as your lifelong Star Wars obsession, these are worth your investment.

The line includes eight pieces, plus a ninth extremely limited edition one that I will double back to — but first, the two that I feel are extremely unmissable: The Han Solo Carbonite Signature Roaster (which will retail for $450), and the Porg Pie Bird (which will retail for $25). The signature roaster is even embossed with the word “France” translated into Aurebesh, the main written language in Star Wars, on the inside, for peak foodie nerdery. Related note — if someone does not capture video evidence of Harrison Ford cooking with the Han Solo Carbonite Signature Roaster at some point in time, what were the last few decades of this multi-bajillion dollar fandom even for?

Other items include a the aforementioned Darth Vader Round Dutch Oven ($395), an R2-D2 Mini Cocotte ($30), a C-3P0 Mini Cocotte ($30), a BB-8 Mini Cocotte ($30), a Death Star Trivet ($20), and Millennium Falcon Trivet ($20). Luckily, despite the big-ticket items being beyond the average fan's budget, there are plenty of smaller pieces in the line that are more feasible. That said, there is obviously going to be Porg Pie War on the horizon the moment these items go on sale, which I, for one, intend to win.

The last item in the line is by far the most beautiful — and, fittingly, the most difficult to obtain. The Star Wars Tatooine Round Dutch Oven will retail for $900, and there are only four of them in the U.S., with a mere nine in the entire world. The stress! The intrigue! I'm shaking harder than the Millennium Falcon's oft-abused hyderdrive.

"Inspired by the desert planet that Luke Skywalker and Anakin Skywalker both called home, this round Dutch oven is as unique as Tatooine’s iconic, binary sunset," reads the Dutch Oven's description. "Complete with a Signature Gold Knob and featuring the pinks and blues of a fading Tatooine sky, this special-edition pot perfectly captures the warmly lit world in the galaxy’s Outer Rim."

To be the first to know when the Star Wars collection drops, you can sign up for the mailing list here — and for the opportunity to be among the nine (NINE!!) people in existence who own the Tattooine Round Dutch Oven, you can sign up here. May the force be with y'all.

More like this
Side Character Energy Has Arrived — Here’s What That Means
By Sophie McEvoy
Starbucks Released New Menu Items For The Summer
By Emma Garza
A Beginner's Guide To Drinking Whiskey
By Alexis Morillo
How To Make The Watermelon, Feta, & Mint Salad Trending On TikTok
By Emma Garza
Get Even More From Bustle — Sign Up For The Newsletter