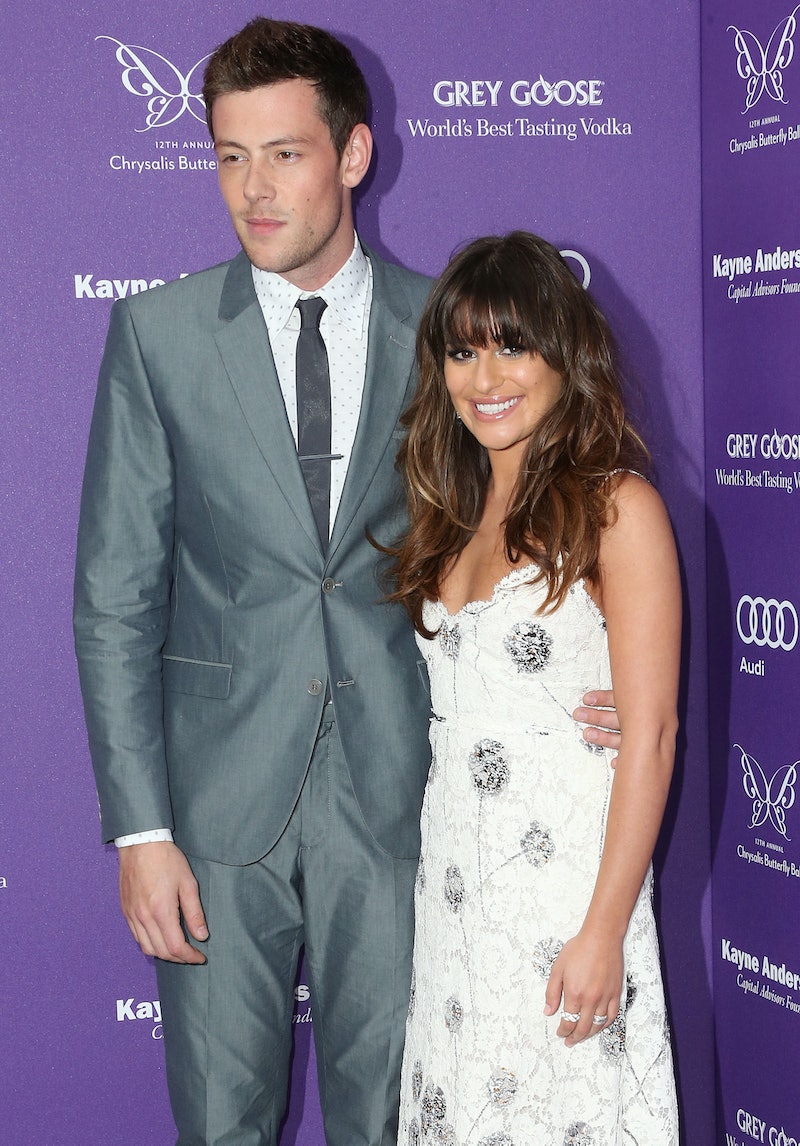 It has officially been six years since the portrayer of William McKinley High's favorite singing quarterback suddenly and unexpectedly passed away. In multiple social media posts, Glee's Lea Michele honored Cory Monteith, her former co-star and boyfriend, like she does each year on the anniversary of his passing. As reported by People, Monteith was only 31 when he died from an accidental drug overdose on July 13, 2013.

On July 13 this year, Michele shared a photo of sunlight peaking through the clouds and reflecting off of a body of water. "The light always remains," she wrote. Last year, she shared a similar quote and photo to honor her late love: "There are some who bring a light so great to the world, that even after they have gone, the light remains.” Michele dated Monteith for over a year, in a case of life imitating art since their onscreen characters Finn Hudson (the aforementioned high school quarterback) and Rachel Berry, the over-achieving captain of the glee club with Broadway dreams, were dating on Glee.

As shocking as his death was, the hit show went on without Monteith — his character's end was marked with a somber memorial episode. Michele has moved forward to, even as she continues to honor her late boyfriend's memory. In March, she married AYR clothing company president Zandy Reich in Northern California, per People, after dating for around two years. However, the fact that she has found new love doesn't mean she will ever forget what she shared with Monteith. In fact, she bares permanent reminders of their love inked on her own skin.

In April 2016, she revealed two memorial tattoos that she procured on the same day. As per People, one is for her late grandmother — a tiny, steaming cup of coffee on the inside of her ring finger — and one is for Monteith: the number five. "For my Quarterback," she wrote. The number represents the same number that Finn wore on his McKinley High football jersey.

More recently, the week before his death's six year anniversary, Michele debuted another tattoo in Monteith's honor. Her upper left thigh simply reads, "Finn," in memory of his courageous and talented character. His story may have been fictional, but to Michele and many others, the happiness and love it allowed to flourish was very, very real.

"I love working with Cory, I always have," Michele told People at Glee’s season 4 premiere that followed shortly after his death. "He really, really inspires me, and he motivates me and I think he's just so talented."

And now, although the hit show has come to an end, Monteith's other Glee co-stars continue to remember and miss him. In addition to Michele's post, Jenna Ushkowitz shared a photo of him on July 13. "Miss you, pal," she wrote. Another Glee star, Heather Morris commented, "Missing him a lot lately," while Amber Riley shared a photo of the two of them on set. "6 years without those bear hugs," she wrote. It's clear from all of their posts that Monteith's memory lives on in the hearts of his co-stars.

More like this
The 'Glee' Cast Isn’t Happy About 'The Price Of Glee'
By Jake Viswanath
Taylor Swift Visited The 'Glee' Set For This Bizarre Season 5 Episode
By Grace Wehniainen
Jameela Jamil Defends Sam Smith After Trolls Body-Shamed Them
By Jake Viswanath
Britney Spears Shared The Real Reason She Shut Down Her Instagram Account
By Brad Witter
Get Even More From Bustle — Sign Up For The Newsletter
From hair trends to relationship advice, our daily newsletter has everything you need to sound like a person who’s on TikTok, even if you aren’t.