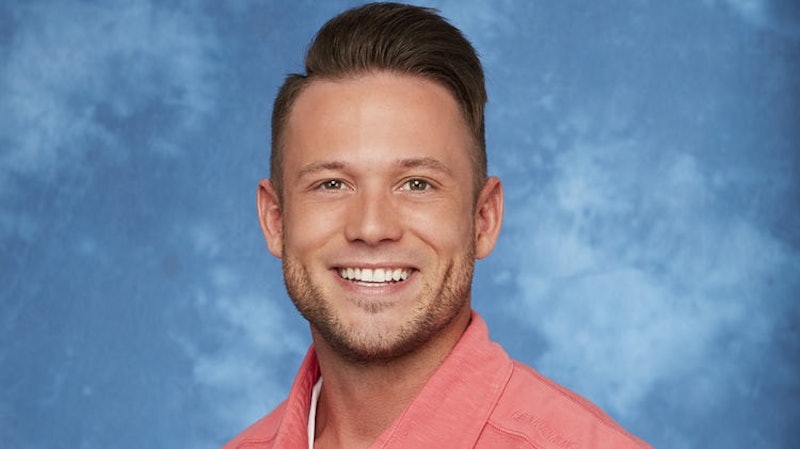 The Men Tell All episode of The Bachelorette is always filled with a certain amount of drama and intrigue, but this year was especially intense thanks to one person: Lee Garrett. This Bachelorette season's villain didn't just engage in destructive behavior while the cameras were rolling; he also made headlines when tweets from Twitter account surfaced that many fans found to be racially insensitive and misogynistic. He shut down all his social media accounts soon after (although his Instagram is now public again) and stayed silent through most of the season, but he could not hide during the Men Tell All episode, when Lee was finally forced to respond to allegations of racism made against him by fans.

Lee's first apology of the night was to Kenny for lying about the mysterious incident he brought up just before being eliminated in the two-on-one date, in which he claimed to Rachel that Kenny tried to manhandle him by pulling him out of a van. “He did not pull me out of the van, and when it comes to that, you’re absolutely right,” Lee admitted on Monday. “[Kenny] took the high road and I should have taken the high road in the beginning. I should have been a better friend, and I was not a good friend to you, and I apologize.”

But what about all those on-camera interviews where Lee appeared to revel in his bad behavior and claim he enjoyed getting under people’s skin? It wasn’t meant to be serious, according to Lee. “I make jokes when I’m uncomfortable in inappropriate times,” he offered up as an excuse.

But even the contestants on The Bachelorette admitted that, in the moment, Lee and Kenny’s fight didn’t seem to be as racially-charged as it appeared to fans watching the show week to week. Kenny told Lee, "It didn't feel like racism ... [I wasn't like], 'Oh, his old racist ass.' It wasn't that way." It wasn’t until Chris Harrison pulled out some of Lee’s now-infamous tweets — which contained rhetoric that many viewers found to be misogynist, sexist, and racist when the tweets were first discovered on Lee's Twitter — that the conversation truly turned intense.

Of course, while Lee was quick to denounce the idea of racism — "I don’t like racism at all. It bothers me morally," he said — it was much, much harder to get him to admit that racism was exactly what he exhibited online. Instead, he skirted around the issue by saying that he was "irresponsible in what I put out," expressing regret that the tweets came out (which isn't the same thing as regretting the tweets themselves), and apologized if he "hurt anybody in any way with a bad joke."

Obviously that wasn't enough for the other Bachelorette contestants, who continued to press Lee to own up to his words. As Anthony, Kenny, and Will all told him, a person can present opinions that are deeply, endemically racist in ways they might not even understand themselves, and just because you don't think you hold racism in your heart doesn't mean you can't say and do racist things. Case in point? While being called out, Lee called the men "well-spoken," a term that Barbara Murphy wrote about in The Baltimore Sun and how it shares a complicated relationship with being black in America.

Finally, Lee actually said the R-word out loud: "That tweet was what was racist, and I denounce it.” In response, the other contestants chose to accept his apologies, provided that he continues to prove himself willing to change.

“I came on again to learn and I made mistakes," Lee concluded, just before apologizing separately to Rachel. "And I appreciate even through that all, even with doubt, you guys are reaching out to help, and it says a lot and it sets an example for me to be a better friend and person, and I appreciate that.”

Of course, even though it's sometimes hard to own up to moments of bigotry, it's even harder to follow through and learn from that mistake. Whether Lee will become a better, more racially-sensitive person in his post-Bachelorette career remains to be seen — and in the meantime, I suspect that fans of the show still won't be forgetting what happened anytime soon.