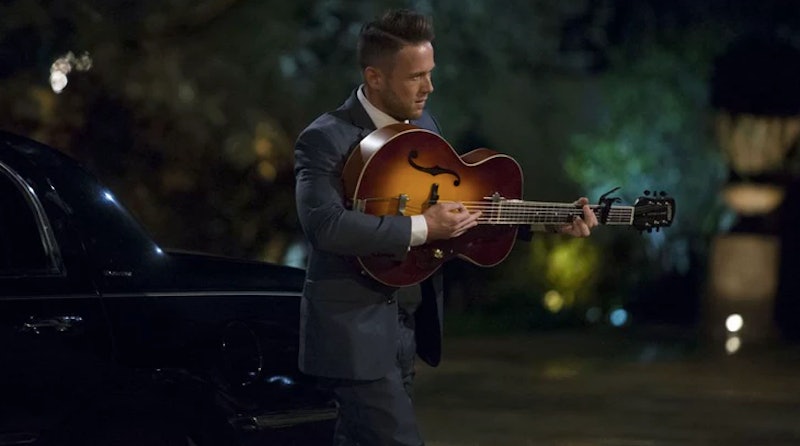 It appears that at least one Season 13 Bachelorette contestant may be hanging around for all the wrong reasons. A recent string of allegedly problematic tweets from Lee Garrett suggest that he may not be the guy for Rachel Lindsay after all. The guitar-strumming crooner, who attempted to sing his way into Rachel's heart on his first night in the Bachelorette pad, has come under media scrutiny for a series of racist and sexist messages that were allegedly posted to his Twitter account during 2015 and 2016, according to E! News. When Bustle reached out, ABC and Warner Bros. declined to comment. A rep for Lee could not be reached.

The disturbing tweets are especially curious, due to the fact that Rachel is the first black person in Bachelor franchise history to star in the lead role. So it would seem a bit odd that someone with seemingly racist views would sign on to become one of 31 men vying for a chance to win the 31-year-old attorney's heart.

A quick glimpse at Lee's now-private social media page reportedly revealed some very offensive and disparaging messages aimed at women, the Black Lives Matter movement, Islam, and the LGBTQ community. Fans on Twitter, as well as publications like the Huffington Post, were able to capture screenshots of the alleged tweets from the 30-year-old Nashville native's Twitter account.

The singer-songwriter's messages allegedly included racist statements such as, "I don't hate Muslims, I do hate Islam. I just mindf*cked a few liberals for standing for something while making reasonable sense." Plus, there were allegedly disparaging comments against women like, "Guys... When is the last time YOU actually saw a pretty feminist? There is a reason for this."

As previously reported by Bustle, Lee appeared to identified as a meninist and once tweeted the link to a story about a petition comparing the Black Lives Matter movement to a terrorist group.

It's also worth noting that this cast has already had its fair share of controversy, despite being only two episode into the season. Another contestant, Bryce Powers, came under fire for making what was perceived to be transphobic comments in his bio on the show's website (which have since been removed), while DeMario Jackson was booted after his girlfriend popped up during filming to introduce herself to Rachel.

With this current news, it seems like these guys are going to continue dropping like flies in the mansion this season. If these tweets are in fact real, I'm just hoping that Rachel gives Lee his walking papers ASAP because, quite frankly, hate has no home in the Bachelorette house — and because she, obviously, deserves so much better. I'm sure there's no need to worry, though. I can certainly rest assured that Rachel, being the strong, independent woman that she is, has zero tolerance for bigotry of any kind.