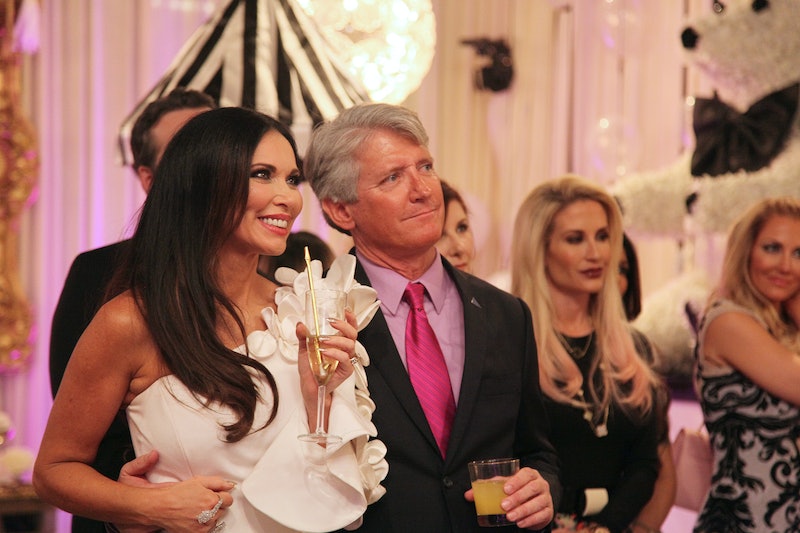 Fans who follow the cast members' lives between seasons probably know that LeeAnne and Rich did tie the knot, despite the naysayers. An article from People confirmed that they got married at Cathedral of Hope, the world's largest inclusive church. LeeAnne became Mrs. Emberlin on April 27, which is a major milestone in general, but it also happened during LeeAnne's favorite month of the year.

LeeAnne told People, "It signifies rebirth. It's when spring comes and all the flowers are blooming. It's when all the dogwoods are in bloom." She also said, "April's a month that's always been precious to me," which could explain why she went all out during April 2019 with her wedding and the parties leading up to the big day.

And, yes, that means it was filmed for the show. Not only that, but the nuptials are heavily featured in the trailer for RHOD Season 4, as it should be. In a clip from the teaser, Dallas Housewives Kameron Westcott and Stephanie Hollman are shown sitting at the ceremony, along with Friend of the Housewives Cary Deuber.

Aside from the wedding itself, LeeAnne's pre-wedding events will likely be featured this season as well. Stephanie, Cary, Kameron, and Season 1 cast member Tiffany Hendra attended LeeAnne's bachelorette party, wearing glittery ensembles on April 9 in Dallas. This also, presumably means, that Tiffany will be a part of a Season 4 episode. It's always nice to see a familiar face!

Just a few days before the bachelorette party, LeeAnne had a lingerie shower, yes, that's a thing, apparently. She posted photos from the event on April 5, which included some boyshort undies that said "Mrs. Emberlin" and another pair covered with photos of the groom's face. No word yet if she actually rocked those on her wedding day.

LeeAnne didn't share photos of any one else at the event, probably to avoid spoilers for Season 4, but Stephanie, Kameron, and new cast member Kary Brittingham did share photos from April 3-5, seemingly complying with the theme. Or, perhaps, it was just a busy week for the Housewives and they had multiple themed events to attend. It does happen, especially on Real Housewives shows.

While it does seem like a good amount of cast members attended the bachelorette party and lingerie shower, LeeAnne did not get a great turn out for her co-ed wedding shower, which took place on April 18. Kameron teased the Season 4 storyline during a September interview with People. Kameron divulged, "The other ladies were invited. I'll just say that. It upset LeeAnne a lot. And you'll just have to see. It upset me as well." She also remarked, "There's a lot coming about that one. Don't get me started." Yikes.

Poor LeeAnne. She probably still had fun at all of the events. Plus, the Real Housewives of Dallas viewers will vicariously attend the event when they watch the episode with the wedding shower, which ultimately means that a lot more people will be there in spirit than anyone would ever have in person.

After three seasons of lead in, LeeAnne will officially put the "wife" in Real Housewives and the viewers will get to experience the special time period with her... cheering from their couches at home.