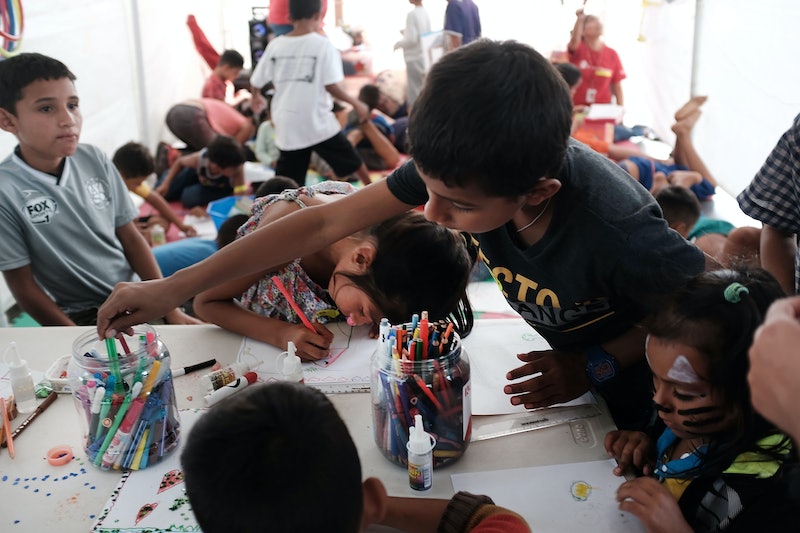 Money problems are reportedly taking a major toll on unaccompanied migrant children in the United States. The Washington Post reports that legal aid for unaccompanied minors in migrant shelters is being cut, as well as English classes and other recreational activities, as funding problems push government capabilities to capacity. The changes began this week, the Administration for Children and Families (ACF), a division of Health and Human Services, says in an emailed statement.

"This week, [the Office of Refugee Resettlement] instructed grantees to begin scaling back or discontinuing awards for [Unaccompanied Alien Children] activities that are not directly necessary for the protection of life and safety, including education services, legal services, and recreation," ACF spokesperson Evelyn Stauffer writes in a statement.

There is a "humanitarian crisis at the border," the ACF statement reads, which is "putting a tremendous strain" on the agency's ability to fund its program for unaccompanied minor children. The statement adds that "Additional resources are urgently required to meet the humanitarian needs created by this influx — to both sustain critical child welfare and release operations and increase capacity."

This could pose problems, the Post reports, not just for the children, but for those in charge of making sure that minors in custody are taken care of. The government is legally obligated to provide education and recreation for minors in custody, per the Post.

"It’s bad enough that the Trump administration is trying to normalize the warehousing of children," said Denise Bell, researcher for refugee and migrant rights at Amnesty International USA, in a statement. "It’s unconscionable that they would so blatantly try to strip them of their rights."

The ACF's statement says the agency is seeking an emergency funding provision totaling $2.88 billion from Congress, in order "to increase shelter capacity" while HHS tries to match the children with sponsors. It adds that Congress was made aware of the funding problem over a month ago.

Immigration rights advocates were up in arms over the development. They expressed concern about how cutting these services would impact children in government custody.

"Basic educational, recreational, and legal services for unaccompanied children are imperative for their physical and mental well-being," Rep. Rosa DeLauro said, according to The Hill. "ORR’s cancelling of these services will inflict further harm on children, many of whom continue to languish for months without being placed safely and expeditiously into a sponsor’s care."

The Post reports that over 40,800 unaccompanied minors have been placed in HHS custody so far this year. That, per the paper, is already a 57 percent increase from the year prior. About 12,587 children were in custody in April, alone, The Hill reports. The average stay reportedly lasted about 48 days.

The Trump administration has faced intense criticism for its handling of children at the U.S.-Mexico border, unaccompanied or otherwise. The controversy has ensued ever since a so-called "zero-tolerance" policy was instituted last April. Although peeled back shortly afterward, following fierce public backlash, HHS and other agencies that interact with migrants have remained under strict scrutiny. Wednesday's development indicates that the problems minor migrant children in U.S. custody face are far from over.