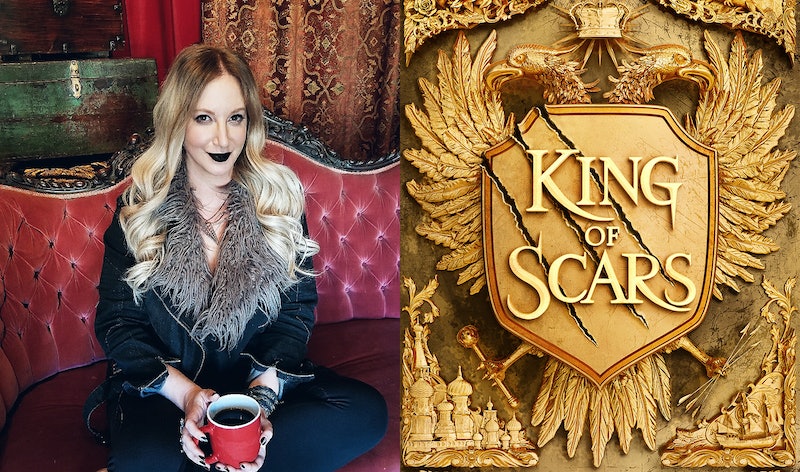 Leigh Bardugo knows the ending of King of Scars is going to majorly thrill — and distress — longtime fans of her novels. "I’ve known where this book would end since I first conceived of writing Nikolai’s story," she tells Bustle in an email Q&A. "But I’ll admit that when I finally wrote the scene, it felt a little like setting off a bomb and then walking away whistling."

Bardugo, the #1 New York Times bestselling author of the Shadow and Bone and Six of Crows series for young adults, is back with the long-anticipated first installment in her new duology set in the Grishaverse, a world where certain humans have the ability to practice a brand of magic called the "small science." Not everyone in Bardugo's world are Grisha; many are human, and those who can practice the small science are often persecuted for their abilities. In fact, it is bubbling anxieties over Grisha power that leads to the major conflicts in King of Scars, which begins just after the ending of Crooked Kingdom, the second Six of Crows novel. The new book circles the adventures of three interconnected Grisha: Nikolai Lantsov, the King of Ravka, who is battling foreign powers and literal internal demons; Zoya Nazyalensky, his right-hand woman and general, who is desperate to find a cure for her King's mysterious ailment; and Nina Zenik, who is waging a personal war against those who use jurda parem, a powerful but dangerously addictive drug that magnifies magical abilities, to subjugate and control the Grisha.

King of Scars is a novel for longtime fans of the series, and readers would be well-served to read both the Shadow and Bone and Six of Crows series before diving in, else they may not recognize many of the characters who flit in-and-out of this novel.

I talked to Leigh Bardugo about King of Scars — and even asked about that completely wild ending. Read it all below, spoiler free.

I’ve always known how Nikolai’s duology would begin and end, but I think if I’d started writing King of Scars immediately after finishing the trilogy, it would have been a very different book and not for the better. The story needed time to cook, and I needed time to figure out what I wanted from these books. Bit by bit, I began to understand the journey the young kind of Ravka was meant to go on, and most importantly, that the story didn’t belong to him alone.

This book gives readers a lot more insight into Zoya’s character and backstory. It really explains why she’s so "cold" — or perceived to be, at least. She wasn’t a main character in Shadow and Bone, but why did you want to include her narrative alongside Nikolai and Nina’s and what did you learn about her in the process of writing this book?

I’m laughing at what Zoya would say to “wasn’t a main character.” She’s a military leader, a member of the Grisha triumvirate, and one of the core people working to keep Ravka from falling apart, so she was always going to play a big role in King of Scars. Zoya starts out deep in mean girl trope territory, but by the time I was halfway through the trilogy, I’d really fallen in love with her. I like her ruthlessness. I like her audacity. Her strength is so hard won and she’s not interested in giving up a single bit of it. I think unraveling her history was the biggest surprise — the old hurts, the bad decisions. I loved being in her head, but it was heartbreaking too.

This book continues the story of Shadow and Bone and the story of Six of Crows, and sets the stage for a major showdown in the Grishaverse. There was always overlap, but as an author, how did it feel to interweave these two stories into one?

It just felt kind of inevitable. Sometimes when I write — at least, on the good days, I don’t have to question whose POV fits a particular chapter or moment; I just have a sense for where I’m going next. Choosing the next Grishaverse book to write has always been a bit like that. King of Scars felt like a natural next step to me. There’s unfinished business in Ravka, in Fjerda, in Shu Han and I wanted to play out the impact of the SoC duology on those countries And I just really enjoy the idea that the actions of a little band of thugs and thieves can change the course of nations.

You wrote an entire book about the mythology and fairy tales of the Grishaverse. Do you often write backstory or tales to supplement your writing and world-building?

Very, very rarely. When I wrote Siege and Storm, I referenced the story of "The Too-Clever Fox," but I had only the haziest sense of what that story might be. It was a way of introducing us to Sturmhond and helping us to understand Alina’s perspective on his character. I didn’t know what exactly that fox had done or which trap he had failed to escape, until I wrote his story. But the way that cultures understand themselves through story tells us so much about a world. What becomes a legend? How does truth get twisted? How do we get our heads around the ideas of magic and power? So I leave breadcrumbs in religious texts like the Sikurian Psalms or children’s books like the Istorii Sankt’ya or popular novels like The Princess and the Barbarian or folk tales like those found in The Language of Thorns. They’re hints at a wider world and places I love to return to dig deeper when I have the chance.

King of Scars ends on a major cliffhanger. Were you always writing towards this scene, or did the ending take you by surprise too?

I’ve known where this book would end since I first conceived of writing Nikolai’s story. But I’ll admit that when I finally wrote the scene, it felt a little like setting off a bomb and then walking away whistling. One of my critique partners was reading the manuscript while we were traveling together and I handed her the last few chapters and went to take a bath. Then I hear this scream from the other room and then “WHAT THE HELL JUST HAPPENED?” I was really pleased. Until she told me I couldn’t leave the bathroom unless I told her what happened in the next book.

I can’t tell you too much and it’s killing me. I just had brunch with [Executive Producer] Eric Heisserer and he mapped out the entire first season and we talked about some of the big things that need to happen before shooting starts. Honestly, it was the first time this all seemed real and I’ve been walking on air ever since. I don’t want to get too deeply into specifics because I want Eric and the other writers to have freedom to move. But yes, right now our plan is to show the Dregs before the events of Six of Crows start. Think of it as a kind of prequel full of cons and heists and plenty of trouble.