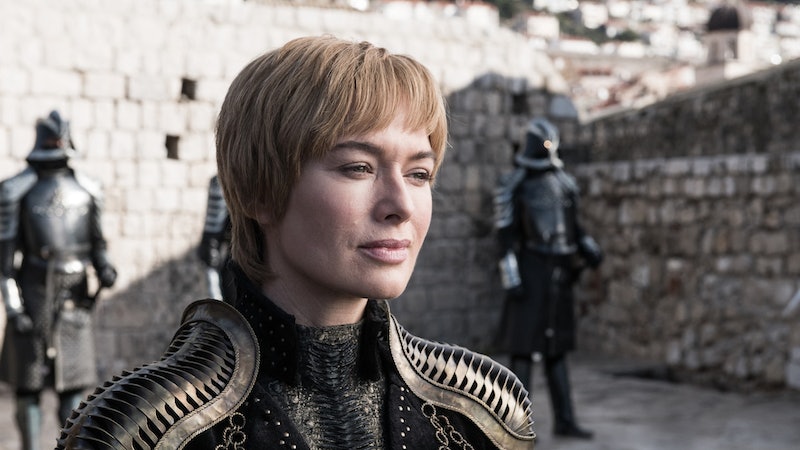 Queen Cersei was always destined to die on Game of Thrones — she'd wronged too many people to escape the series alive — but being killed by falling rocks felt anticlimactic for one of the show's best villains. In a new interview with The Guardian, Lena Headey revealed she didn't like Cersei's death any more than the fans did. After playing Cersei for so long, the actor knows the ins and outs of her character better than anyone, and she had her own ideas about what would make a satisfying end for the Lannister queen. So if Cersei herself would have wanted a better ending, then you know it was bad. Of course, many fans already knew that, but this is validation, of sorts.

Per The Guardian, Headey said that when she finally gets the chance to sit down with Game of Thrones showrunners David Benioff and Dan Weiss she'll tell them one thing: "I will say I wanted a better death." She doesn't go into details, but odds are, her feelings are probably similar to the fans': Cersei's death was just too boring for such a daring character. Falling rocks is a lame way to die, especially for a Lannister who has done so much in Westeros, and yes, that includes all of her dastardly deeds (especially those). Come on, her father got to be harpooned while taking a nighttime bathroom trip, the least they could have done for Cersei was give her a death that would be equally as memorable.

Headey went on to explain that she spent a long time thinking about how Cersei would go out. "Obviously you dream of your death," she said. "You could go in any way on that show. So I was kind of gutted. But I just think they couldn't have pleased everyone. No matter what they did, I think there was going to be some big comedown from the climb."

It's true that a show shouldn't go out of its way to try to please everyone, but the writers certainly should have delivered a zinger of a death for the show's iconic evil queen in the same manner that they did for the likes of Joffrey Baratheon and Ramsay Bolton.

The day after Cersei's final episode aired, Headey took to Instagram to share a farewell to her character and the show she's been working on for the past decade. The actor wrote,

"There she goes. It's been fun, and bonkers . I loved her. I am grateful for the opportunity. Massively thankful for your encouraging and supportive love along the way. And now her watch is ended (I know she'd never make it, Nights watch wouldn't have her .. but still..) 💗💗💗💗💗💗"

While her watch ended sooner than some of the other main characters, Cersei still lasted a hell of a long time considering all of the enemies she made. Regardless of how this season ended, Game of Thrones is still one of TV's best shows, and Cersei is one of the medium's most iconic villains. It's just too bad her ending wasn't as fearless as Headey's portrayal of the Lannister queen always was.