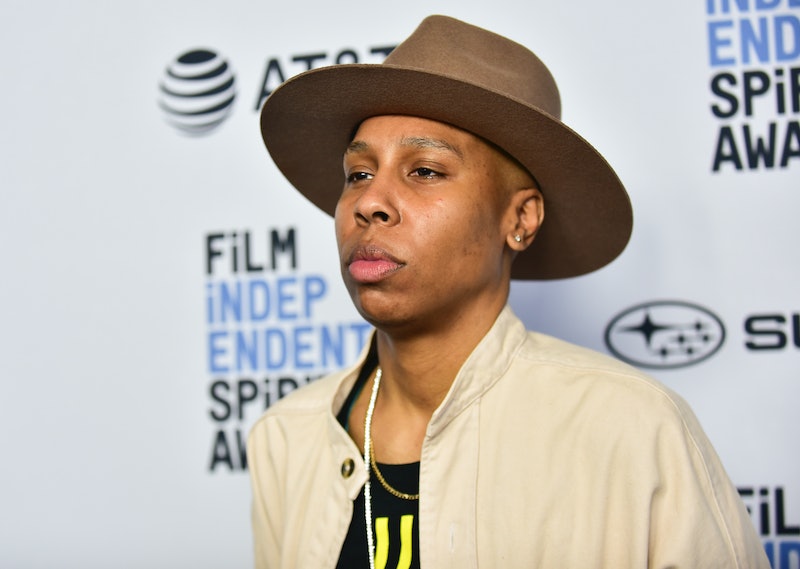 From Charmed and Will & Grace to What Men Want and what seems like every single Disney movie, nostalgia for the '90s is at an all-time high. Now, it’s BET’s turn to ride the wave with its upcoming series Boomerang, which is based on the iconic 1992 movie of the same name starring Eddie Murphy, Halle Berry, and Robin Givens. The network teamed up with Paramount Pictures for a series based on the movie, but they had no writers, no producers, or any solid concept — until Emmy Award-winning writer Lena Waithe signed on to produce Boomerang so she could put a fresh spin on a familiar film for a new generation. But she wasn't about to get behind just any revival — it had to feel relevant, showcase new talent onscreen and off, and, most importantly, she had to be able to call the shots on what those things meant.

“To me, it was about the continuation of the story,” Waithe tells Bustle. “Even before this Boomerang thing popped up, I was always fascinated by what happened to Angela and Marcus after they strolled off into the sunset. In my opinion, they got married. They did the thing. They had the kids. They started their own agency. That was what happened in my imagination and that’s where we really began.”

In the film, the three main characters were caught in a complicated love triangle that ended with Marcus (Murphy) and Angela (Berry) reconciling after he cheated with Jacqueline (Givens). The source material may have laid the foundation for the Boomerang TV series, but Waithe definitely wants fans to know that this is definitely NOT a cookie-cutter remake.

She believed rehashing the same storyline would be a "horrendous" choice and compared it to trying to re-create a Michael Jordan as opposed to paying homage with a newer “LeBron James version” that pays tribute to the movie while delivering something innovative and fresh for a new generation. Her desire to do something different was further encouraged by Halle Berry, who starred in the original and will co-executive produce the series.

Waithe confirms that the original Boomerang characters won't be in the show, but they will be referenced in dialogue for a good reason, because the series focuses on Marcus and Angela's daughter Simone (Tetona Jackson), who is trying to build her own brand in the advertising world and escape her parents' shadow.

Like the younger version of her father, Simone is ambitious, attractive, and not interested in a romantic commitment, but she also inherited Angela’s calm demeanor. Coincidentally, her close friend (and not-so-secret admirer) is Jacqueline's charming and brilliant son Bryson (Tequan Richmond), who is trying to find his footing at The Graham Agency in Atlanta in hopes of being the next Marcus Graham.

Simone and Bryson’s mutual friends are an eclectic, creative group including an exotic dancer who is passionate about social activism, an aspiring director, and a devout Christian, yet they all manage to comfortably coexist, mingling for game nights and candid life conversations. As expected, the show is unapologetically Black, and the characters' personalities and interactions feel authentic and relatable to today’s audience. The show will definitely reel in '90s kids like Waithe with homages to the past in Boomerang’s soundtrack and throwback fashion aesthetics, such as Simone's plaid button-down shirts (and one hilarious throwback ad pitch).

Boomerang tackles contemporary themes like navigating corporate spaces with older generations, eschewing narratives about what certain genders should aspire to, and different opinions on spirituality, dating, marriage, and sexuality. According to BET, the show will address the #MeToo movement and other prominent social issues, all within the context of a half-hour comedy series. And no one is better equipped to do all of that than Waithe.

Waithe, a Black queer woman, insisted on being allowed to truly mold the overall narrative in the same kinds of ways she put her mark on Master Of None as a writer and star and The Chi, which she created and produces.

“I went to them and my partners at Paramount and was like “Look, if you’re going to hire me and let me do this, then you have to let me do it. You gotta give me the space, you gotta give me the freedom,” Waithe says. “My hope is that when people see something from me, they can expect for it, I hope, to be relatable and good but for it to also be done in a way that is very sophisticated and done with care," she adds.

Waithe used Boomerang to amplify new and upcoming Black creatives in the entertainment industry, bringing in writer Dime Davis, who currently works on The Chi, to direct several episodes alongside newcomer AV Rockwell. She also worked closely with her co-producer Rishi Rajani to build a diverse writers room, wardrobe department, and editors to ensure every aspect of Boomerang is properly filtered through a Black lens to effectively tell the story. And, the show’s ensemble cast features all fresh faces — a move that Waithe considered vital to reviving the film in the right way.

"I want to keep telling stories that are honest and true. I want to give people a punch in the gut but also a hug after it happens, you know? I want it to be surprising and shocking and true and real and alive, that’s what I want to do."

All of these choices play into her career and life mantra of, in her words, "doing dope sh*t" and telling a wide range of stories with authenticity and passion. "That is really is my mantra and that can mean many things," Waithe affirms. "I want to keep telling stories that are honest and true. I want to give people a punch in the gut but also a hug after it happens, you know? I want it to be surprising and shocking and true and real and alive, that’s what I want to do. I want to help people tell their story. I want to make sure I’m telling my own story in a very honest and true way. And I want to inspire people too.”

Boomerang is Lena Waithe's labor of love that allowed her to bring her imagination to life, invest in other creatives, author new stories, and bring increased representation to a network that is looking to beef up its original programming. And, if Waithe has it her way, this series will be more dope sh*t that connects with new audiences and makes them want to tune in every week.

More like this
On 'The Handmaid’s Tale,' Christine Ko Fights Back
By Gretchen Smail
24 Years Ago, 'Friends' Dropped Its Most Underrated Ross & Rachel Episode
By Grace Wehniainen
Netflix Reveals First Look At Wednesday In The 'Addams Family' Spinoff Series
By Bustle Editors
Everything To Know About The Long-Awaited ‘Community’ Movie
By Stephanie Topacio Long
Get Even More From Bustle — Sign Up For The Newsletter