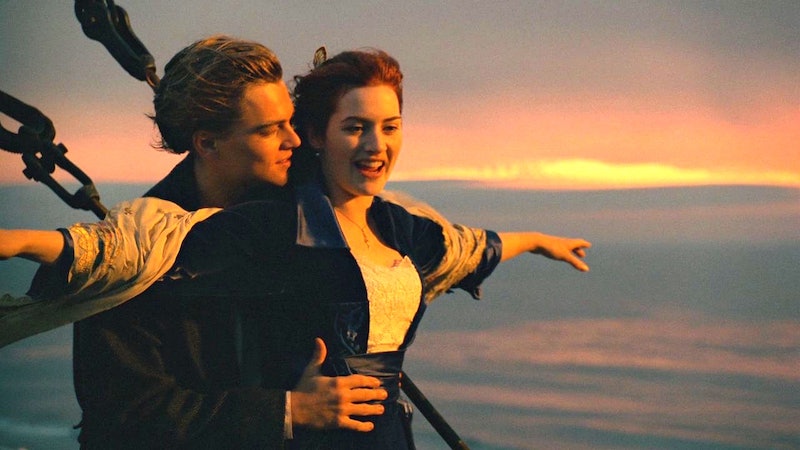 Two decades after its release, you'd hardly expect that a movie could still have more surprises to offer. But the fact that Matthew McConaughey was almost Jack in Titanic really does change everything. Kate Winslet casually dropped that knowledge bomb during a recent appearance on The Late Show with Stephen Colbert to celebrate the film's 20th anniversary. (It was released in 1997, and congratulations — you are officially old.) But even though the reveal was about what might have been if Leonardo DiCaprio hadn't been Jack in Titanic, even though the news doesn't actually change anything, this will still make you think about the movie and its cast in an entirely different light.

While reading the question to his guest, Colbert revealed only that McConaughey had been up for the role that eventually went to DiCaprio, which is something many fans will likely already have known. (Rumors were swirling about McConaughey being Paramount's top choice for Titanic as far back as 2012, and the Dallas Buyers Club star went on the record about the near-miss in 2016.) But what most folks didn't know, because she'd never spoken about it before, was exactly how close Winslet and McConaughey came to being co-stars:

This is pretty much the first time we've been confronted with just how close we came to not getting that Kate-and-Leo thing.

For two actors to audition together is a big deal. It means that they're fairly near the end of the casting process, and all that remains is to observe the actors' chemistry together. It sounds like McConaughey was really and truly almost there, which checks out with the version of events that he shared with PEOPLE last year:

Both actors would've been undeniably great, and, 20 years later, they both have Oscars to prove it. But swapping one actor for the other in the role of Jack Dawson would've had far-reaching consequences, and one thing that a lot of them boil down to is the age difference.

Leonardo DiCaprio is 43 now, which would have made him 23 during filming. Matthew McConaughey is five years older, at 48. That doesn't seem like a big deal now, but would've been a much larger differential back then. DiCaprio is just one year older than Winslet, which allowed the actors to be on the same page. Neither character seemed like they were rescuing the other; they were equals, right down to the size of the role.

It's a delicate balance that likely would've been shifted by a leading man six years older than his leading lady. All of a sudden, we'd have a similar dynamic to the one seen between Rose and Billy Zane's character, Cal. Zane is 51 today, and, while his character's years on Rose weren't the only thing that made them a bad match, it certainly contributed. The whole point was that Rose didn't feel known in her previous life, and what Jack was offering was a fresh start and an opportunity to find herself. So even just having the new relationship be with someone her own age was a big deal, whether we realized it at the time or not.

Basically, while McConaughey would've been a very interesting choice as Jack Dawson, but it's hard to imagine replicating the epic, equal chemistry of DiCaprio and Winslet at all.