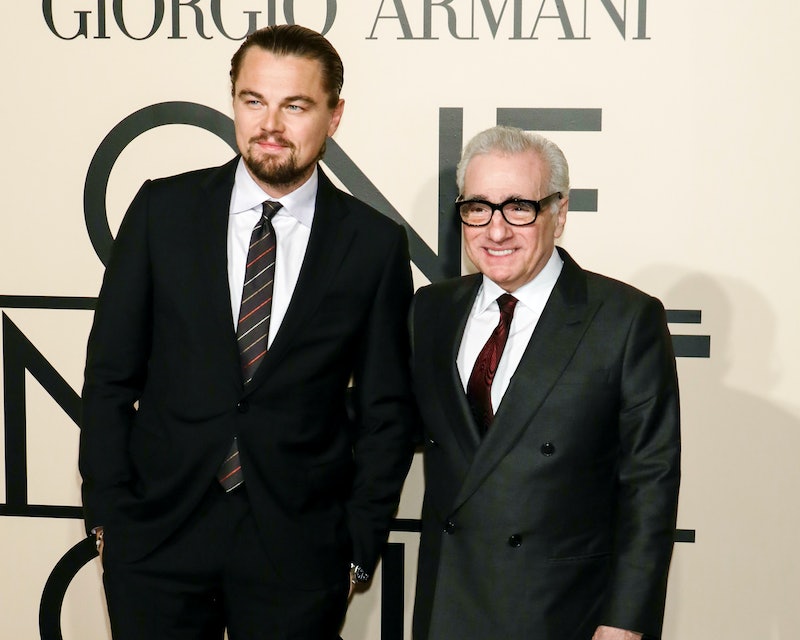 It's been in the works for close to a decade, but now it seems as if Leonardo DiCaprio & Martin Scorsese's Devil In The White City series is finally coming to fruition thanks to Hulu, according to Variety. The show will be adapted from the eponymous novel by Erik Larson — the full title is actually Devil In The White City: Murder, Magic, and Madness at the Fair That Changed America — which was based on real people and real events that occurred during Chicago's World Fair in 1893.

This project is a long time coming. Like, a really long time coming. The book came out in 2003, and by 2004, Tom Cruise and Paula Wagner had already attempted to get it developed, as Variety noted. DiCaprio purchased the rights for a film version of the novel in 2010, and Scorsese came on as the director in 2015.

It's unclear why it's taken them so long to get the project up and running, but hey, it's here now, right? Well, it will be. No idea when, exactly, but it'll be here — eventually.

As for what else is currently known about the series, well, there actually isn't a whole lot else known about the series, actually. Billy Ray — whose credits include The Hunger Games and Captain Phillips — is set to write the script, as per Variety, and Paramount Television has been confirmed to produce. That's about all the info they've volunteered thus far.

Back when it was slated to be a film, DiCaprio was reportedly going to take on the lead role of Dr. H. H. Holmes, according to Entertainment Weekly. It's unclear if he still intends on playing Holmes now that they've decided to turn it into a series, but it would definitely be an interesting character for DiCaprio to play.

Holmes was a pharmacist and serial killer — in fact, according to Mental Floss, some say he was the world's first serial killer — who did a lot of damage back in the day. According to Brittanica, most of the murders occurred at his "Murder Castle" — yes, that's seriously what they call it — in Chicago during the 1893 World Fair.

The "Murder Castle" was equipped with some wild stuff, as described by The Guardian — horrific stuff. Stuff like trap doors, secret passages, soundproof rooms, gas jets for asphyxiation, acid pits, a stretching rack — which, word to the wise, you definitely don't want to Google — doors that locked from the outside, and a full-on kiln that Holmes would use to cremate his victim's bodies.

Eventually, Holmes would be caught, but not before he killed what is believed to be a total of upwards of 200 people. Well, he only admitted to having killed 27 people at first. Later, he said the number was more like 130, but Brittanica noted that research suggests it was more like 200.

Now, can you imagine DiCaprio playing the role of Holmes? Holmes, the dark, deceptive, monstrous king of his own "Murder Castle"? It'd be a new direction for him, that's for sure.

Until more details are announced, though, you'll have to just use your imagination. And if the anticipation is killing you — pun intended — the book is definitely worth a read.