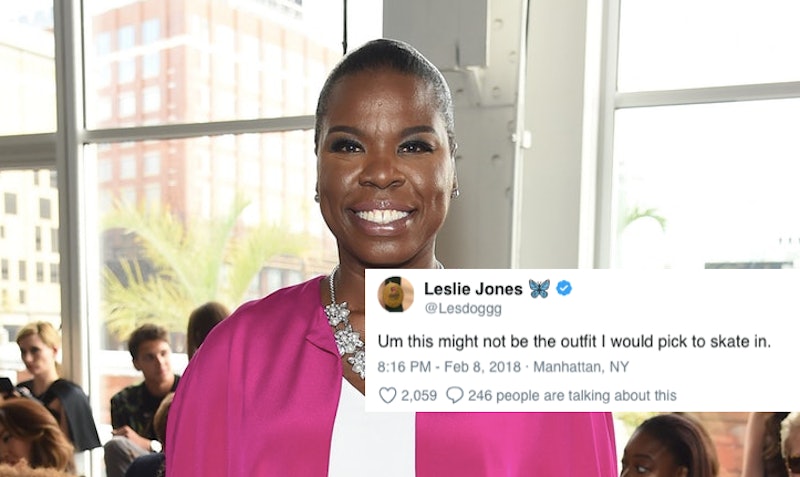 The 2018 Winter Olympics officially began with events on Thursday night and with the freezing opening ceremony in PyeongChang, South Korea on Friday. And if you are a nut for the Olympic Games, or if you are in need of some enthusiasm for Team USA, all you need is Leslie Jones' winter Olympics tweets and Snapchats. Jones proved herself to be the Olympics’ biggest and funniest fan in 2016 when she live-tweeted the Summer Games in Rio de Janeiro. Her fervor for the events and her hilarious commentary earned her a spot as an official NBC commentator in Brazil, and she’s back this year for the winter games. Well, almost back. Jones hasn’t touched down in her Team USA gear in South Korea just yet — her flight out of Atlanta was delayed because of snow. But she’s already started with the amazing coverage on her own Snapchat and Twitter.

Jones has been posting the same Olympics coverage on both her Snapchat and Twitter, so if you're watching one, don't worry, you're not missing out on the other. NBC's President of Olympic Production and Programming Jim Bell told Deadline, "Experiencing the Olympics through the lens of Leslie is unlike anything else."

Truer words have never been spoken, and even on only day two of the Winter Games, Jones' live-commentary has already delivered. She started out with her own mini opening ceremony of sorts on a stationary bike wearing an amazing stars-and-stripes Team USA tracksuit. First event up was ice-skating, and Jones not only gave stellar commentary on the athletes’ routines, but also on their (oft-ridiculous) outfits. Like this guy, who she calls "a little Dutch boy."

In fact, Les Dog had quite a bit to say about the sartorial choices of the skaters:

"I'm just trying to figure out — how is he gonna skate with suspenders on."

She even tagged her friend and favorite fashion designer Christian Siriano in some of the gorgeous costumes that reminded her of him, like this very feathered get-up:

Despite all the fantastic fashion down on the ice, Jones' favorite look by far was from commentator/ice skater Johnny Weir:

Honestly, Leslie Jones would look amazing in that outfit.

Apparently, there was a villain on the ice. Jones thinks that Mikhail Kolyada from Russia has a face to play evil. A handsome evil, though!

She was even more jazzed for skating doubles, which is arguably the most fun skating event to watch. And the most nail-biting — those women are just being tossed around!

There was more than one relationship analogy:

And, probably the most relatable sentiment of all for the big fans of skating and/or people who recently saw I, Tonya: "I've always wanted to learn how to ice skate, but it's knives on your feet." EXACTLY.

If you're not pumped up for the Winter Games, just follow Jones and it's almost impossible to not get a little excited. She's Team USA's number one fan.

She's also a part of NBC's official coverage, as soon as the weather clears and she makes it to South Korea. Look out for her commentary there, as well, though her Twitter and Snapchat will always be there for you, too.