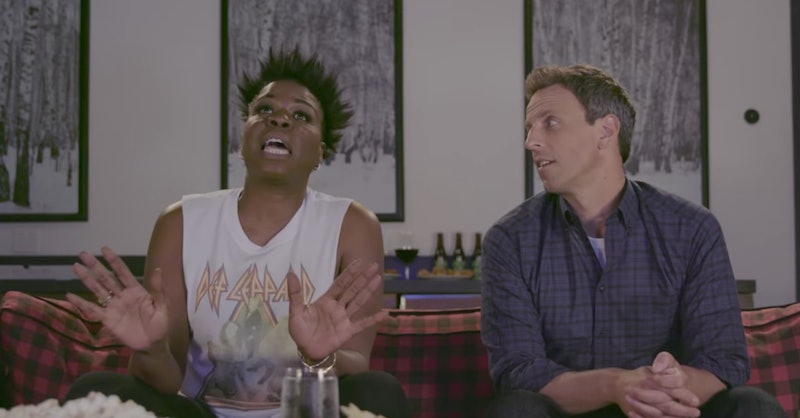 There's no one quite like Leslie Jones, but when it comes to watching a new episode of Game of Thrones, she's super relatable. In another installment of Game of Jones, Jones was surprised with a special visitor and still managed to offer up some truly fire commentary about the Season 7 GoT episode "The Spoils of War."

In the video, the SNL star basically became all of us as she watched. Some of Jones' funniest observations included her very interesting re-branding of Winterfell ("I would literally call it 'Compton Castle'") and what she dubbed "Bran Face," which is basically a nickname for all the dead-eyed staring Bran does when Meera chastises him for not saying goodbye to her properly. Oh, and how can we forget her absolute elation when she saw Arya was returning home? Jones is the GoT viewing partner we all need in our lives.

But perhaps the best moment in Game of Jones came when Conleth Hill, who plays Varys on GoT, actually surprised her. Decked out in full Varys garb and complete with a bald cap, Hill welcomed Jones into his arms for a happy hug before they all settled on the couch to munch popcorn and continue watching the episode.

Of course, it took Jones a few minutes to compose herself because hello, this is Varys we're talking about. It's not every day everyone's ideal GoT viewing partner gets to hang out with an actual GoT cast member. Once things had calmed down a little, Jones proceeded to rip on Hill for Varys' actions in a way that only she could get away with.

The pair went back and forth for a bit, making jokes about the eunuchs of the show (because who isn't over Theon Greyjoy's idiocy at this point?) and even joking about Daenerys' current bid for power; Jones makes a fair point about how great it is to see Dany wielding some authority. It's difficult not to nod your head along with her observations, especially because she's saying what we're all thinking.

After watching this latest installment of the Late Night bit, it's going to be very boring watching GoT without Jones' commentary.