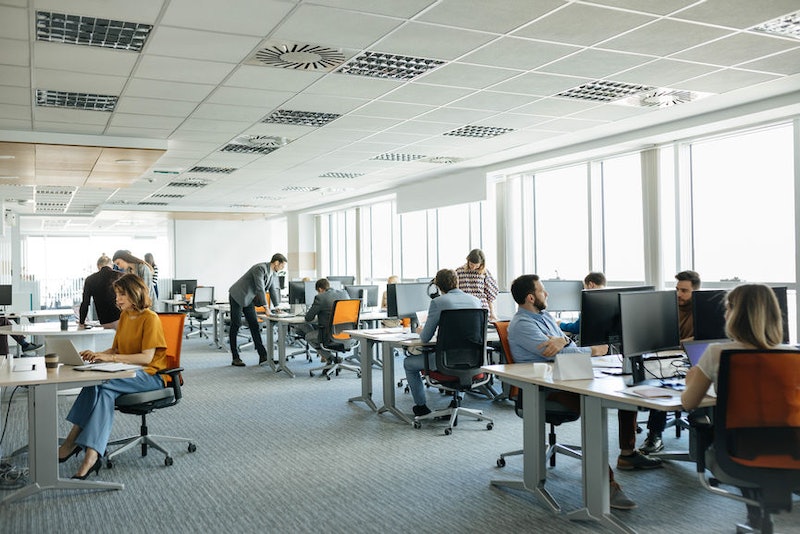 Getting your head around your working environment is a tricky business. It takes a long time to adjust to a new workplace. Sometimes you might never actually settle, or you might feel like you are being treated unfairly. Say for example, being paid less than a colleague in the same role? With the only discerning factor between the two of you being that you're a member of the LGBTQ community and they're not. Well guys, it's 2019 and yet this is still a huge issue. As a matter of fact, recent research claims that LGBT+ people are paid 16 percent less annually than their straight peers

The research was commissioned by social media giant LinkedIn and undertaken by YouGov. The results were sent over to Bustle in a press release. As a part of the research for the study, the team surveyed 4,000 UK workers. The workers surveyed identified themselves as being "straight," "gay," "bisexual," or "other." The main take away from this research is that there appears to be a £6,703 (16%) discrepancy in income between LGBT+ workers and their straight colleagues.

However, while this was the most material result, the survey also dragged up some other notable statistics.

One out of four of the queer people surveyed are not out to their work colleagues. And of those people, 28% said they feared being judged as a key reason behind their decision. I guess you could argue that maybe that is people's own insecurities, right? Well, no, because, of the straight people surveyed, a shocking 38% believe that queer people should only be open about their sexuality in the workplace if it's appropriate for the working environment.

Of the members of the LGBT+ respondents, 35% have either heard or experienced comments that were homophobic. Twenty-one percent reported experiencing some form of verbal abuse themselves, while 8% claim to have witnessed an LGBT+ colleague being discriminated against or being treated differently owing to their sexuality.

Looking specifically at the transgender community, the study found that there's a 14% (or £5,340) income gap between those surveyed and their straight counterparts. Sadly, 20% of the transgender respondents admitted to feeling constantly uncomfortable about their gender identity in the workplace. Nearly half of the transgender people surveyed had experienced judgmental comments from colleagues.

So can be done about this situation? Forty-four percent of trans respondents called for more to be done to accommodate increasingly diverse and inclusive environments. In total, 60% of LGBT+ respondents also requested that their companies implement more transparency in terms of inclusive policies.

Speaking about the survey, the executive director and co-founder of Black Pride, Phyll Opoku-Gyimah (also known as Lady Phyll), discussed other areas that need attention also, including the issues affecting people of colour:

"The more we hear from LGBTQ employees, the more we begin to understand that the fight for equality is far from over," Opoku-Gyimah said. "Whilst it's brilliant to see research like this highlighting the conversation, it's vital that there is change in the day-to-day cultures of companies to help LGBTQ employees feel comfortable at work, including those of colour that may also be experiencing discrimination and racism."

"Research like this from LinkedIn is incredibly important in reminding organisations that inclusion should be at the top of their agenda. Although we have seen progress in the workplace for LGBT+ people, it is clear that there are still substantial issues which can make it difficult for individuals to thrive professionally as their authentic selves. LGBT+ people are at all levels of a business, whether they’re out or not, so it’s crucial to have inclusive environments. It’s not only morally right, but it also strengthens the bottom line."

More like this
Footballer Jake Daniels Shared His Thoughts On A World Cup Boycott
By Sam Ramsden
Joe Lycett Just Took HIs David Beckham Qatar Protest To A Whole New Level
By Sophie McEvoy
Iran Has Issued A Death Sentence Over Mahsa Amini Protests
By Catharina Cheung, Darshita Goyal and Maxine Harrison
'Waterloo Road' Is Back, With More Than A Few Familiar Faces
By Sam Ramsden and Vivian Iroanya
Get The Very Best Of Bustle/UK