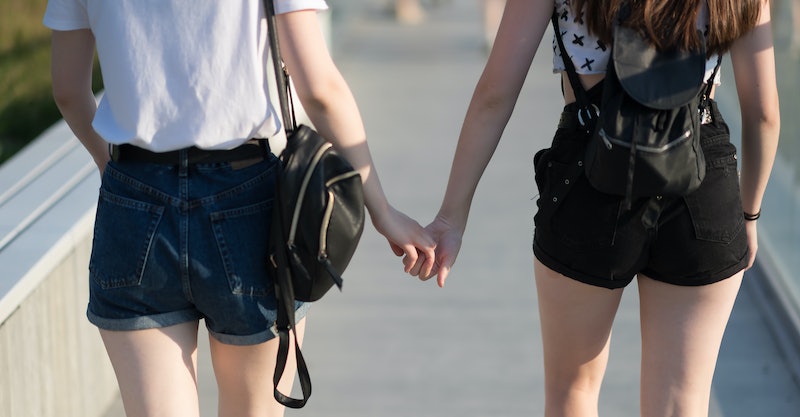 His hand was firm on my shoulder, assertive, and heavy with male authority. He yanked, stopping me from kissing her in the process. Then came his gruff, aggressive voice: “What are you doing?” We moved away, but the night continued along the same lines, with men physically interrupting us and questioning what we were doing, until we eventually gave up and left.

Besides the obvious, the situation angered me most because of what was going on around us. It was 2014, and there we were, at a dingy bar back home in Penrith, Cumbria, surrounded by numerous male-female couples snogging to the point of virtually having sex, with a hefty serving of VK-induced dry humping, and it was our kissing that had been deemed "too much." If it hadn’t been for my friends being in the same building, I would have felt unsafe.

Discrimination has been a common theme throughout all my relationships, and that often surprises my straight friends. To them, it looks like the LGBTQ+ community have effectively achieved equality. And I don’t blame them for thinking this. After all, we’ve achieved equal marriage rights, same-sex adoption rights, and we are supposedly protected by the 2010 Equality Act. However, the truth is that homophobia, biphobia, and transphobia remain huge, unresolved problems when it comes to being visible in public.

Discrimination has been a common theme throughout all my relationships, and that often surprises my straight friends

I’m not alone, either. At the end of May 2019, there was international outrage after Melania Geymonat, 28, and her girlfriend Chris, 29, were violently attacked on a night bus in north London for refusing to kiss one another on demand for a group of men. Seeing the images of the couple covered in blood after the attack filled me with a combination of sadness, anger, and fear.

After the attack, both women spoke out defiantly, but, notably, emphasised that this discrimination specifically faced by queer women was nothing new. “It was scary, but this is not a novel situation,” Chris told the BBC after the attack. Melania, meanwhile, added: “The violence is not only because we are women which are dating each other. It’s also because we are women.”

Indeed, less than a week after the attack was reported, another queer couple — actors Lucy Jane Parkinson and Rebecca Banatvala — were assaulted while on their way to perform in Southampton (the show was subsequently cancelled).

This demeaning and often sexualised abuse against queer women has been at the centre of discussion recently for a number of journalists including Sophie Wilkinson, Amelia Abraham, and Stefania Sarrubba.

More generally, research has shown how LGBTQ+ people still fear discrimination in their daily lives. Last year, the government’s National LGBT Survey revealed that more than two-thirds of respondents said they were afraid to hold hands with a same-sex partner in public. Again, this did not come as a surprise to those in the queer community. “You ask any gay person, they’ll tell you that it doesn’t feel safe to hold hands with their partner in public, really, I mean I know that, I’m a gay person,” came the nonplussed response from Olly Alexander when he was asked to comment on the results.

Pride is so important to me because it provides a safe environment where I can be open and not feel constantly on edge. And it’s exciting, too. Somewhere strewn among the glitter, rainbows, and blaring Beyoncé, there's this feeling that we might actually be on the cusp of something amazing.

But there's so much work to be done. We need better ways to combat hate crime, which has been spotlighted by these recent attacks. The National LGBT Survey revealed that two in five respondents had faced discrimination because they are LGBTQ+ in the previous year, but more than nine in ten of the most serious incidents went unreported.

Elsewhere, education is key. We need to teach kids about all sexualities and gender identities, and that being LGBTQ+ is acceptable and normal. While the UK government has passed an act pledging to teach kids about LGBTQ+ relationships in all England’s primary and secondary schools, there is still so much more to do. The protests from parents outside primary schools in Birmingham have shown just how strong the opposition to LGBTQ+ education remains.

Inequality, a lack of representation, and feelings of internal shame all take their toll

And, finally, we need desperately more funding when it comes to mental health care for the LGBTQ+ community. Inequality, a lack of representation, and feelings of internal shame all take their toll on the mental health of LGBTQ+ people, and research has shown that our community suffers disproportionately.

I didn’t choose who I love, and nothing will ever change me. I want to be able to walk down the street holding hands with my girlfriend in London and Cumbria, and for us not to get leers, looks, or nasty jibes. I want young girls and boys to have queer relationships earlier in school, just like their straight peers, and for it to not be a thing. Basically, I want to be equal.