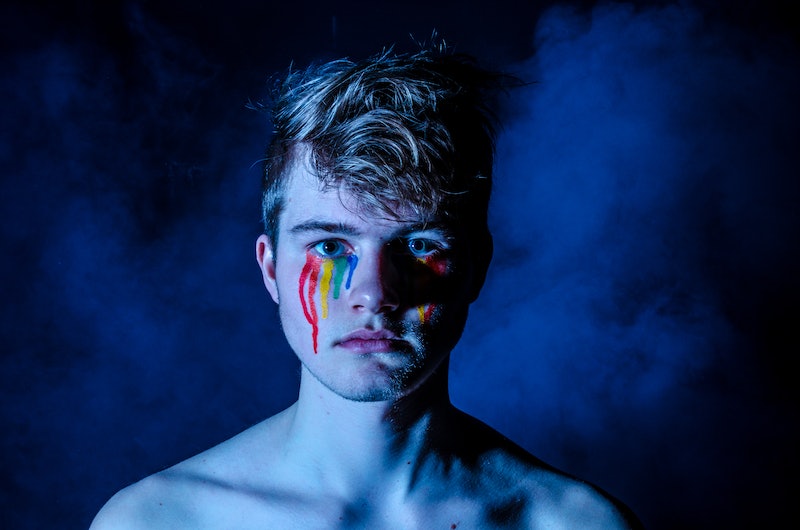 October is LGBT History Month, and for queer folks and allies alike, that means a month dedicated to spreading not only love for, but knowledge of and awareness about the queer community. That's why it's especially important to address often undiscussed challenges, like the fact that a disproportionately high number of queer people are at risk of developing eating disorders. According to the National Eating Disorders Association (NEDA), research indicates that beginning as early as age 12, "gay, lesbian and bisexual teens may be at higher risk of binge-eating and purging than heterosexual peers." The numbers are particularly alarming when it comes to gay men: They are seven times more likely to report bingeing and 12 times more likely to report purging than straight men.

"Today, I’d describe myself as many different things," Amy Babich, a queer woman and an alumna of the Eating Recovery Center, tells Bustle. "[I am a] massage therapist, dancer, advocate, comedian, thrill-seeker, dog mom, and the list goes on. But there was a time in my life where the way I’d describe myself was much different: sick, anorexic, depressed, and suicidal."

According to NEDA, there is a "broader cultural context of oppression" and a "myriad of unique stressors" that specifically affect queer people and may put them at a higher risk of developing an eating disorder.

For Babich, struggling with her queer identity "definitely prolonged my eating disorder," she says. She grew up Catholic, and says there was little room for questioning anything, let alone her sexuality and identity. She explains, "I don't believe it was the sole reason for my anorexia, as I had a lot of past trauma in my life I had to overcome, but the fact that it took so long for me to really allow myself to think about, talk about, and explore who I was, in terms of my sexuality and gender expression, made recovery impossible, until I was able to do so."

Myra Hendley, primary therapist at Eating Recovery Center, Carolinas, tells Bustle about 30 percent of her queer patients report struggles with their sexuality, and want to bring that into eating disorder-related therapy sessions. "It is safe to say that perhaps eating disorders and sexuality are not talked about enough in general, whether in correlation with one another or separate," she says.

While treating a queer person involves the same process as treating a non-queer person, Hendley says assuring her queer patients' safety and acceptance is paramount, and that "just like any minority, special topics require special attention."

Hendley echoed NEDA's findings, saying, "For someone with an eating disorder, the shame cycle alone is enough to take on in treatment. When coupled with shame from a family system or society in regards to one’s sexuality, it can be paralyzing for someone."

Babich says that after coming out, she received "tremendous support" from fellow queer folks in recovery. "It took me a long time to truly recover, because it took me a very long time to be honest with myself, and the people I love," she says. "My recovery really began once I came out. I had spent many years in treatment, never being able to maintain solid recovery, but once I came out, it was if someone had flipped a light switch. My acceptance of who I truly am was the key to recovery that I had been missing all along."

For patients whose complicated feelings about their sexuality have intertwined with their eating disorder, breaking the cycle of shame is a necessary part of recovery, Hendley says. "If food is symbolic for feelings, then it is easy to see how carrying around feelings of shame regarding sexuality can drive an eating disorder," she says. "Freedom from oppression can start with freedom in eating."

NEDA found that feeling connected to the queer community may be a crucial important factor in lowering a queer person's risk of developing an eating disorder — so it's essential that queer folks not only call attention to this issue during the 31 days of LGBT History Month, but that we also support one another 24 hours a day, 365 days a year.

If you or someone you know has an eating disorder, you can get additional information by contacting the Eating Recovery Center via phone at 877-789-5758, via email at info@eatingrecoverycenter.com, or at its website.