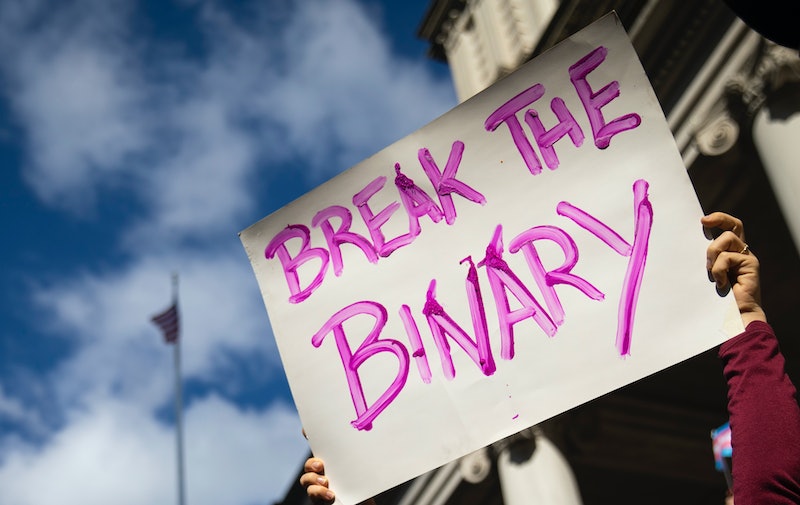 While traditional gender and sexual identity labels emerged to empower LGBTQ people to claim their identities, a new study reports that LGBTQ youth are less likely to use traditional labels for gender and sexual identity. Published in the Journal of Research on Adolescence, the study explains that more young people identify as pansexual, non-binary, or asexual than lesbian, gay, or bisexual. The study collected data from the LGBTQ National Teen Study in collaboration with the Human Rights Campaign, according to a press release.

"The survey of 17,000 teens was conducted online across a range of race, ethnicity, and socioeconomic statuses, and found that 26 percent chose emerging sexual identity labels," the press release explained. Whether people identify as LGBTQ, pansexual, non-binary, asexual, another term, or prefer not to label themselves at all, it's important to respect each individual's identity. This was part of the reason researchers at the University of Connecticut explored the topic.

"We need to ask and be open to what our teens' sexual identities are, because if we don't know they're out there, we don't know how to help them," Ryan J. Watson, assistant professor of human development and family studies at UConn, said in the press release. According to a recent survey from the Born This Way Foundation, "LGBTQ youth are less likely than their non-LGBTQ peers to rate their mental health highly and are much more likely to report feeling helpless or sad, anxious, or fearful."

This is why supporting and seeking to understand people, no matter how they identify, is vital to mental wellness, and education is key to understanding how to support LGBTQ, pansexual, non-binary, and asexual youths and adults alike. However, the 2020 U.S. Census is not even asking about identity, which is a missed opportunity to capture important data that could be used to provide resources, the study explained.

"We're already missing who we know exists out there, and this study has showed us that it is not enough today to just ask about these traditional labels — lesbian, gay, bisexual. Instead, there's thousands — and if you extrapolate from this study, hundreds of thousands — of teenagers who identify with new identity labels that people don't even know what they mean; they have never heard of them before," the study outlined.

"This is vexing, given there are likely hundreds of thousands of youth who are using terms like pansexual and non-binary. It's important for researchers especially to capture what the nuanced experiences might be of these youth. We don't want to miss them. We want to make sure we capture what these youth want to be called; the identities they actually are identifying with. We think that's pretty important."

In addition to the terms laid out by the study, there are other sexual and gender identity terms it's important to know, such as intersex, agender, demisexuality, aromantic, and more. Even if you don't understand all of these terms, educating yourself and living your life on the basis of kindness and acceptance is the best way to support everyone, regardless of their gender or sexual identity.

However, if you're part of the LGBTQ community, then you know that social support is not always easy to find, even within the community. "The problem with social and community support as a protective factor for the most marginalized gender and sexual identities is that they are less likely to find support within the overall LGBTQIA2s+ community, because oftentimes their identities are invalidated or disparaged even by other sexual minorities," the study reported.

"Bisexual people in study after study reported not feeling welcome in traditionally 'lesbian and gay' spaces. Trans people have also historically been excluded from the 'gay rights' movement, and asexual people are often ignored or viewed as not really being part of the sexual minority community."

Aside from leading with kindness and acceptance, it's also important to acknowledge that varying identities exist. "The other thing folks can do is just ask and be open about changing terms. What we see is a growing number of young people and adults coming out and feeling free to tell other people about their sexual identity," the University of Connecticut study noted. "We need to ask and be open to what our teens' sexual identities are, because if we don't know they're out there, we don't know how to help them."

If you're struggling to find acceptance, and you need help, there are myriad organizations to reach out to including the Born This Way Foundation, It Gets Better Project, Q Card Project, The Trevor Project, and more. Everyone deserves acceptance. You deserve to be here, to be seen, and to be happy, no matter your gender or sexual identity.