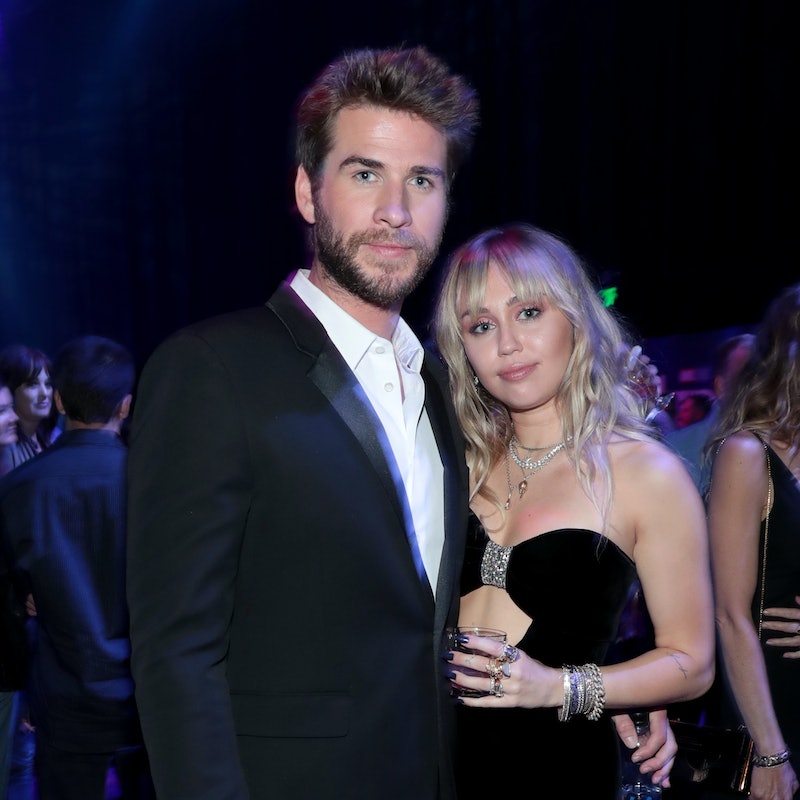 Miley Cyrus surprised fans on Thursday, Aug. 15, when she dropped a brand new song, seemingly addressing her recent split from her husband of eight months, Liam Hemsworth. Listening to her new song, it's impossible not to think that Miley Cyrus' "Slide Away" lyrics are about Liam Hemsworth.

"Slide Away" is all about letting go of a significant other and accepting when you've grown apart. There's no question it's a breakup song. And though Cyrus hasn't officially said one way or another that her newest track is about her relationship with Hemsworth, fans of the singer are already connecting the song to her longtime love.

Cyrus and Hemsworth announced their separation on Aug. 10 after fans started speculating about the singer not wearing her wedding ring in a series of Instagram posts. A representative for the singer released a statement to People that read in part, "Ever-evolving, changing as partners and individuals, they have decided this is what's best while they both focus on themselves and careers." (Bustle reached out to representatives for Hemsworth and Cyrus regarding their separation, but did not receive a response.) Both stars have been keeping the reasons for their separation private, but Cyrus' "Slide Away" lyrics paint a pretty vivid picture of what might have gone wrong.

Cyrus is clearly lamenting the deterioration of a relationship that was once somewhat of a fairy tale. While Cyrus and Hemsworth's relationship, which began a decade ago when they met on the set of The Last Song in 2009, has been full of public ups and downs and breakups and makeups, the duo always found their way back to each other. And in December of 2018, they were married in a small ceremony. But, alas, it seems wedded bliss wasn't meant to last forever.

These lyrics appear to be referencing their lost house in Malibu, which was burned down by the Woolsey California wildfire in November of 2018. A month later, the two were married, but it seems Cyrus wants to return to the simpler times, in their house in the hills.

As for the "whiskey and pills," Cyrus has yet to release an official video for "Slide Away," but the YouTube video of the audio is an image of what appears to be an empty bottle of whiskey and pills floating in the water, suggesting that these lyrics are more significant than one might think. They also coincide with reports that Cyrus was growing frustrated with Hemsworth's alleged partying. "Liam parties with his friends, and Miley thinks he should've grown out of that by now," a source reportedly told People. (Bustle reached out to a representative for Hemsworth for comment on this reported partying, as well as a representative for Cyrus on the meaning of these lyrics, but has yet to receive any response.)

It's also possible that the "whiskey and pills" are a reference to Cyrus' party-heavy Bangerz era, which happened to coincide with her and Hemsworth's last major time apart in 2013-2016. Or, more simply, the lyrics could just be a metaphor for when they were younger and, perhaps, partying more as a whole. Whatever the lyrics are referencing, the singer clearly wants to move forward.

"So won't you slide away / Back to the ocean, I'll go back to the city lights"

These lyrics from the chorus are pretty straight forward. After all, Hemsworth is from Australia and is known to enjoy his time on the beach, while Cyrus was already a megastar living her life in Los Angeles when the two met. In fact, Hemsworth was reportedly spotted surfing in Australia after they announced their separation, and his statement on Instagram regarding his marriage featured a photograph of a beach.

Cyrus was 17 years old when she first fell in love with Hemsworth on the set of The Last Song. He was only a few years older. And, while they've been able to hold on to their relationship for 10 years, through various rough patches and breakups, it seems now they've just grown too far apart. And perhaps two people who were once perfect together as teenagers might not be as perfect as adults.

"Slide Away" is a bittersweet addition to Cyrus' discography, and one that will likely live on as a picture of her relationship with Hemsworth, whether or not it was intended to be.

More like this
You Might Want To Rewatch 'Elvis' For This Britney Spears Easter Egg
By Grace Wehniainen
Sadie Sink Would Escape Vecna From 'Stranger Things' With This Taylor Swift Song
By Grace Wehniainen
What Is Ariana Grande's Net Worth? When It Comes To Money, She Has No “Problem”
By Hugh McIntyre
Beyoncé Delivers “Soaring Vocals” On New Album “Renaissance”
By El Hunt and Radhika Menon
Get Even More From Bustle — Sign Up For The Newsletter