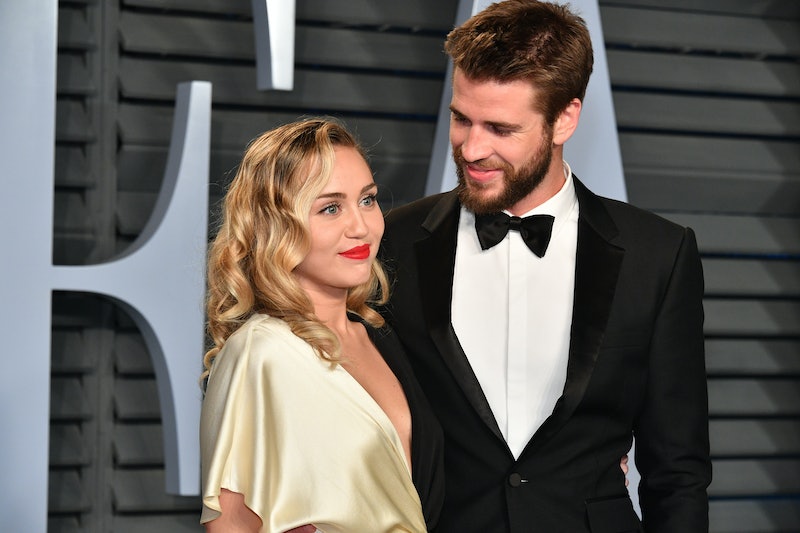 Now that Miley Cyrus and Liam Hemsworth's first month of marriage is in the books, it seems appropriate that they're already making the rounds to events as husband and wife. On Saturday night, Hemsworth and Cyrus attended the G'Day USA awards gala, and not only were some seriously adorable moments between them captured, but Hemsworth also gave a sweet shoutout to his wife at the show, too.

Being that Hemsworth hails from Australia, it's not surprising at all that he and Cyrus stepped out at this gala. According to the organization's website, G'Day USA is an economic diplomacy program that aims to improve the relationship between Australia and the United States. As Variety reported, this year's event was especially exciting for Hemsworth, since he was honored with the Excellence In Film award.

And when he took the stage to accept the award, he thanked his family, including a special message just for Cyrus. “Thank you to my beautiful wife,” he said. “You are a sweet, sweet angel. Yeah, you’re great.”

And as if that wasn't cute enough, a video taken from inside the event showed Cyrus' jaw dropping when Hemsworth mentioned her. At that point, she reportedly shouted from the crowd, "More about me!" And Hemsworth replied, "I'll tell you later."

And yes, sitting together at the awards, Cyrus and Hemsworth were just as cute. Newlyweds, right?

When Extra talked to Hemsworth on the red carpet, he had even more sweet things to say about his marriage.

"We've been together for the better part of 10 years, so it's the same but different," he said of the transition from being engaged to being married. "But it's all wonderful, and I feel very lucky to be with her, and it's great."

Hemsworth's Arkansas costar, Vince Vaughn, also threw a shoutout Cyrus' way when he presented her husband with his award, joking that he wasn't invited to their wedding and even mentioning how they met on the set of The Last Song 10 years ago. Vaughn said,

“We’re obviously not that great of a mate-ship because I wasn’t invited to the wedding. I don’t know. That may or may not have happened. I don’t know... His first leading role was in 2010 — ‘The Last Song’ — which won him a Teen Choice award. And that’s also where he met Miley, who he might or might not be married to. I would not know, personally, because I was not invited to this wedding that may or may not have happened.”

Don't worry, Vaughn — you're not the only one who's salty about missing what the rest of us can only assume was the wedding of the century.

The G'Day USA gala is just the first of many events that Hemsworth and Cyrus will attend as a married couple, so buckle up — there should be tons more adorable moments where these came from in the future. And in the meantime, there's always their Instagram updates.