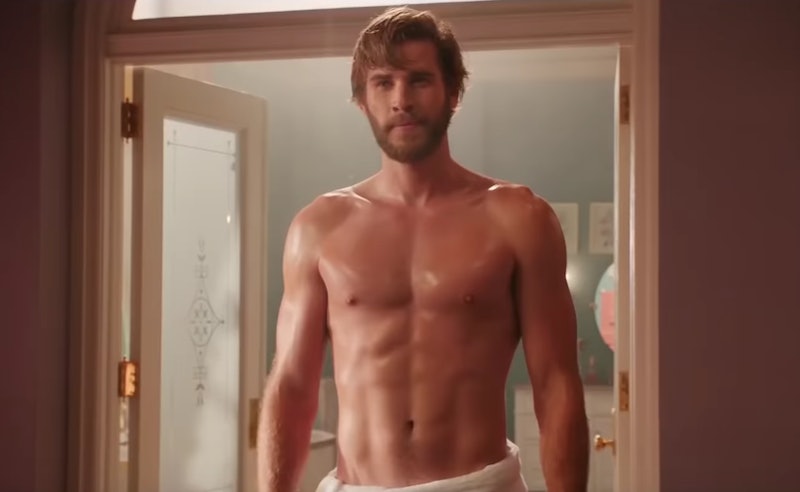 In the new meta rom-com Isn't It Romantic, out Feb. 13, Liam Hemsworth plays the man of everyone's dreams except, of course, the movie's protagonist. See, Natalie (Rebel Wilson) is a total rom-com hater who, you guessed it, finds herself living inside of one after sustaining a head injury that somehow alters her reality. Liam Hemsworth's character in Isn't It Romantic is based on so many rom-com leading men that it's hard to keep track of them all. After seeing the comedy, you may be inspired to look back at some of the dashing heroes of movies past, which is why we've rounded up this list of references. Mild spoilers ahead.

Blake doesn't seem to be based on one rom-com man in particular — he's more of a mishmash of rom-com cliches. But breaking down his characteristics will help you realize just how clever the satire of Isn't It Romantic is.

It probably won't surprise you that the new film was written by three women who love watching the kind of movies that it sends up. Screenwriter Erin Cardillo recently told The Los Angeles Times that she'd relied on the fantasy of rom-coms to help her get through her parents' divorce. Dana Fox and Katie Silberman came onto the project, and both had already written rom-coms themselves — How to Be Single and The Wedding Date are among Fox's credits, while Silberman penned Set It Up.

Clearly, everyone on the writing team know the characters that inspire Blake's over-the-top charm inside and out. Here are all the rom-com Prince Charmings you may recognize in Hemsworth's dreamy but problematic character.

One of the most obvious, and recent, prototypes for Hemsworth's character is Crazy Rich Asian's Nick Young (Henry Golding). Early on in the film, he takes a call from his dad, who has business in Singapore — ahem — and he's overall ridiculously rich to the point where he can charter helicopter rides from NYC to the Hamptons for fun.

Walter Burns From His Girl Friday

Blake comes across as the classic rom-com trope of a man who is convinced that, no matter what, he'll get the girl. His Girl Friday's Walter Burns (Carrie Grant), who's irritatingly confident in his wooing abilities, definitely resembles Blake.

In Isn't It Romantic, after Blake meets Natalie, he writes his phone number on individual petals of a rose and then mixes them up and sprinkles them into her hat. As Natalie points out, the odds of her figuring out the right phone number out of those flower petals are incredibly low, but Blake suggests that fate will bring them back together.

The petal scheme hilariously satirizing the premise of Serendipity, in which a woman named Sara (Kate Beckinsale) has a guy (John Cusack) put his and her phone number and name on five dollar bill and on the front pages of a book in a book store. She'd proposes that if they find one another's information, then they're meant to be.

Steve Edison From The Wedding Planner

Matthew McConaughey's Wedding Planner character, Steve, first meets Jennifer Lopez's Mary Fiore when he stops her from getting hit by a car. If you would call that a "meet cute," then it's one similar to how Blake meets Natalie — even if it was Blake's car that almost hit Natalie.

Ryan Gosling's Jacob Palmer has a similar confidence and swag, but perhaps more noticeably, both rom-com leading males get to show off their abs for more than a few seconds in their respective movies.

Spoiler alert for the end of Isn't It Romantic. Blake reveals that he doesn't expect Natalie to keep working after they get married. That kind of outdated idea is reminiscent of the sort of fairytale that Julia Roberts' character in Pretty Woman dreams about. Edward, played by Richard Gere, fits perfectly into the role of a man who "saves" his romantic partner and gives her a life of luxury that she doesn't have to work for. Granted, Natalie and Vivian (Roberts) have different levels of happiness in their careers so it's not exactly the same story.

One of Blake's distinctive characteristics is his frequent use of the word "beguiling." It's not hard to track that kind of ostentatious use of meaningless words to sweet-talker Daniel Cleaver (Hugh Grant), Bridget's bad boy boss.

Hemsworth gives a fully committed performance in Isn't It Romantic, and it may have you re-thinking some of your existing rom-com crushes.