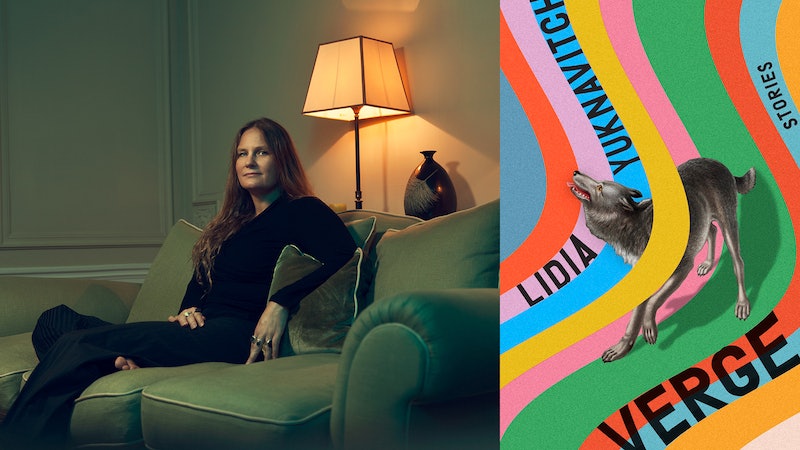 If you loved The Book of Joan or The Small Backs of Children, you're going to love this news. Verge, celebrated author and speaker Lidia Yuknavitch's new book, is her first story collection, and it's coming next year from Riverhead Books. Keep reading to find out more about Verge, and check out an exclusive first look at the cover, only on Bustle.

Lidia Yuknavitch stormed onto the bestseller list with her second novel, The Small Backs of Children, in 2015. The book, about a writer's obsession with rescuing an Eastern European child who has unwittingly become the subject of a friend's award-winning photojournalism, generated lots of buzz, which put Yuknavitch's next offering, the post-apocalyptic Joan of Arc retelling The Book of Joan, on readers' radars. The Book of Joan is Yuknavitch's last book-length work, immediately preceding her most-recent publication, The Misfit's Manifesto, which was based on her popular TED Talk from October 2017, "The Beauty of Being a Misfit."

Verge is Yuknavitch's first book in two years, and is the first collection of short fiction for the author, who also published a memoir, The Chronology of Water, in 2011. Publisher's copy calls Verge, "[a] fiercely empathetic group portrait of the marginalized and outcast in moments of crisis, from one of the most galvanizing voices in American fiction." The stories range in scope, moving from a traumatized child running human organs through an Eastern European black market, to a janitor who builds a scaled-down city out of the discarded things he finds.

In a previous interview, Yuknavitch told Bustle that she "think[s] language and the body are literally sites — real places — where meanings are always generated and negated, endlessly." Like her other offerings, Verge is certain to grab your attention from the very first page, and to hold onto it with the author's signature taste for a constant psychological and unsettling making of meaning.

Verge isn't the only new material that Lidia Yuknavitch's fans have to look forward to, however. Personal Shopper star Kristen Stewart is set to write and direct a film adaptation of The Chronology of Water, the actress announced in an interview with the Cannes Film Festival last year. Indie darling Stewart has previously directed a short film, Come Swim, which is available to watch for free on YouTube. At the time of this writing, no further information is available on her adaptation of Yuknavitch's memoir.

Verge by Lidia Yuknavitch is out on Feb. 4, 2020 from Riverhead Books and is available for pre-order today.

More like this
The 'Firefly Lane' Book Ending Teases Way More Tears To Come In 2023
By K.W. Colyard
Steve Banerjee's Wife Irene Sold The Chippendales Brand Prior To Her Death
By Brad Witter
Casey Anthony’s Father Said He Was “Ready To Forgive Her” Before She Renewed Allegations
By Brad Witter
Where Is John Leonard Now After Suing Pepsi For A Harrier Jet?
By Brad Witter
Get Even More From Bustle — Sign Up For The Newsletter