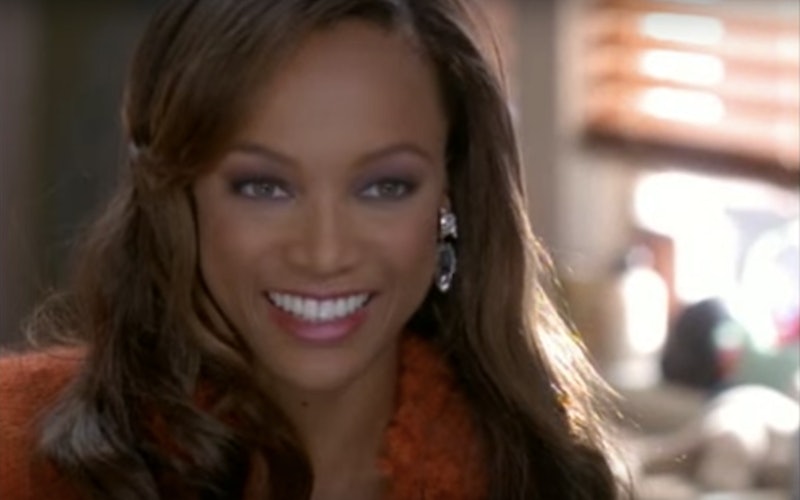 Tyra Banks isn't just returning to TV with America's Next Top Model; she's also reprising her role as Eve in the Disney Channel classic Life-Size. It was announced at Freeform's 2017 Upfronts that Banks will star in Life-Size 2, but there's a merry little twist to this sequel: It will be a Christmas movie.

The new Life-Size will focus on an all grown-up Eve, who's now a lot wiser and ready to play someone's guardian angel. When she's awakened by a young woman, Banks' Eve has to help her learn to live and love again. (Seriously, who can forget all the lessons in the original Life-Size?) But since this is a Christmas movie, be prepared to watch Eve learn some important holiday-themed lessons of her own. According to the press release, "Eve will experience ups and downs of real life in a fun, edgy, modern Christmas movie."

Banks seems to be excited for the sequel tweeting, "One word: LIFESIZE. Oops, 2 words. LIFESIZE 2." No surprise, really, since, back in 2015, when it was announced that they a holiday sequel to Life-Size was in the works, the model said she would be back in an interview with Variety: “There is no one else that can play Eve but me, thank you very much! I’m just joking with you, but yes, I am going to be Eve."

Seriously, though, Banks is right. She was the perfect casting for the fashion doll come to life. Only Tyra Banks could wear those Life-Size fashions. And she totally nailed the silliness. That scene of Eve at work pretending to type is everything. On top of that, she gave us all the perfect theme song with "Be A Star," which I think we've all found ourselves singing when we need a little confidence.

As for who's going to be the young woman in the movie, well, that's still a mystery. It's safe to say that Lindsay Lohan won't be reprising her role as Casey Stuart, the grieving girl who accidentally brought her doll to life trying to resurrect her mom. (Yep, sometimes Disney Channel movies were way darker than you remembered.)

Two years ago, when Banks, who is also an executive producer on the film, was asked about casting for the film that was slated to air in 2016, she seemed to imply that Lohan wasn't involved with the new film. “We have not talked about casting at all so I have no idea who is going to be the young person that will be the owner of Eve," she told Variety. "We haven’t gotten to that.” Here's to hoping for a real Christmas miracle, and LiLo makes a cameo in Life-Size 2.

Just don't expect to see Eve under this year's Christmas tree. The Life-Size sequel will be one of the new films added to FreeForm's "25 Days Of Christmas" in December 2018, so you'll have to wait just a little longer to see this one. Honestly, though, after 17 years of waiting, what's one more year?