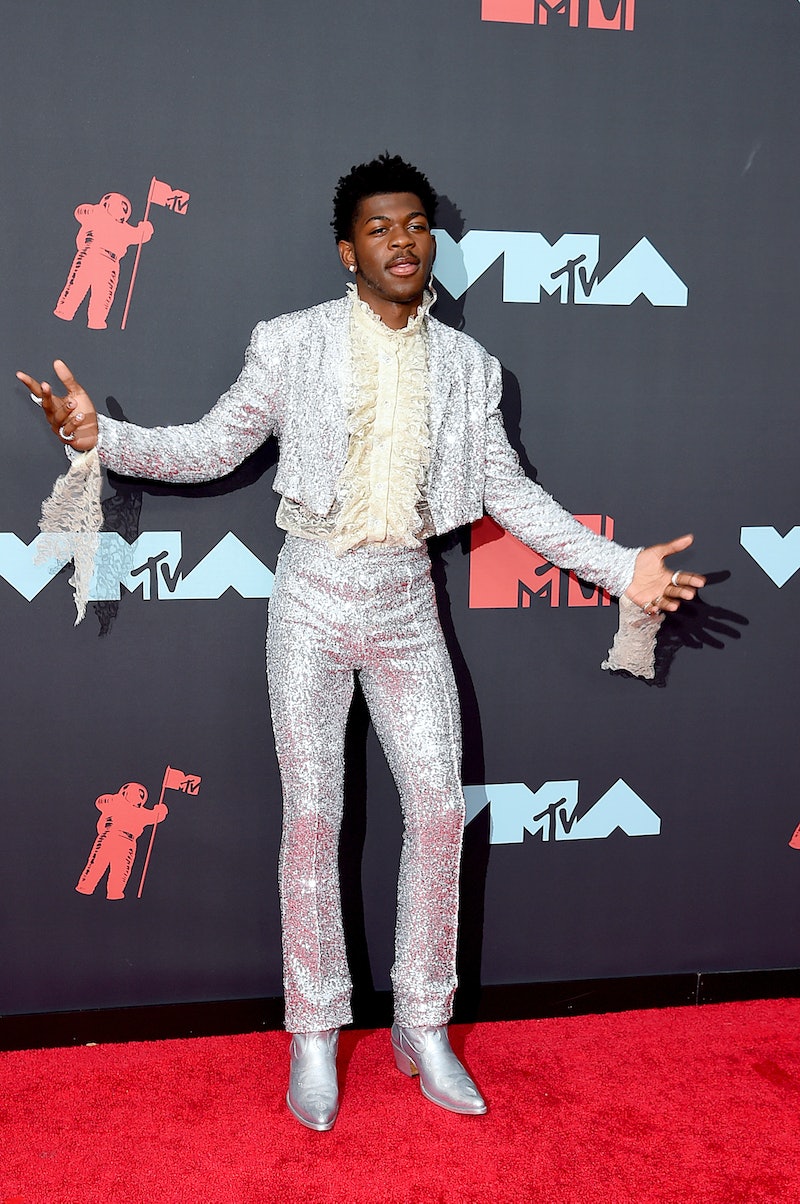 Lil Nas X has become one of the biggest names in music this year thanks to his massive hit single, "Old Town Road." But during his 2019 MTV VMAs performance, Lil Nas X opted to sing his new song "Panini," as he announced Monday morning via Twitter. In order to bring the track to life, the 20-year-old went full-out futuristic, making an epic VMAs debut after a very fitting intro from one of his major collaborators.

Billy Ray Cyrus introduced Lil Nas X and joked that they've been linked together in everyone's minds for weeks, thanks to their "Old Town Road (Remix)" team-up. "Everywhere I go people are like, 'where's Lil Nas X?'" Cyrus joked before the artist took the stage to perform.

Lil Nas X began his set with a fake news report from the year 2079 that poked fun at the many "Old Town Road" remixes released thus far, playfully joking that he'd still be remixing the song when he became president — including features from artists like "Yung Sandwich," the "Ghost of Benjamin Franklin," "Megan Thee Stallion's Twek Wind," and "Old Thug." Then, Nas X took the laser-filled stage surrounded by dancers in futuristic costumes reminiscent of the 1982 movie TRON and the 2010 film TRON: Legacy. The dancers wore black with iridescent accents, while Lil Nas donned a shiny white bodysuit.

Lil Nas X also celebrated his VMAs performance by partnering with Panera Bread to deliver a panini to one of his fans (get it?). It's among the many things the artist has celebrated in a huge year. Lil Nas X's breakout single "Old Town Road" (and its many remixes) spent a groundbreaking 19 weeks at No. 1 on the Billboard Hot 100 chart, until it was recently dethroned by Billie Eilish's "Bad Guy." YouTube declared "Old Town Road" to be the Song of the Summer in the United States, as reported by Variety on Aug. 26. Former President Barack Obama even included the song on his summer playlist.

Sure, all the talk about Lil Nas X so far has been about his mega-hit "Old Town Road," but the artist also released an EP called 7 in June. The EP includes "Old Town Road (Remix)" (ft. Billy Ray Cyrus)," as well as new songs such as "Panini," "Rodeo" (with Cardi B), and "C7osure (You Like)," a track he pointed to when he came out on the final day of Pride Month via Twitter.

"Old Town Road" had its big moment, but as Lil Nas X's VMAs performance shows, now it's time for "Panini" to shine.

More like this
Taylor Lautner Thought Taylor Swift's 2009 VMAs Interruption Was A "Skit"
By Alyssa Lapid
Beyoncé Just Announced Tour Dates: Here's How To Cuff Tickets To Her 2023 Shows
By Jake Viswanath
Twitter Is Having A Meltdown Over Buying Beyoncé Renaissance Tour Tickets
By Jake Viswanath
All The Best Celebrity Reactions At The 2023 Grammys
By Brad Witter
Get Even More From Bustle — Sign Up For The Newsletter
From hair trends to relationship advice, our daily newsletter has everything you need to sound like a person who’s on TikTok, even if you aren’t.