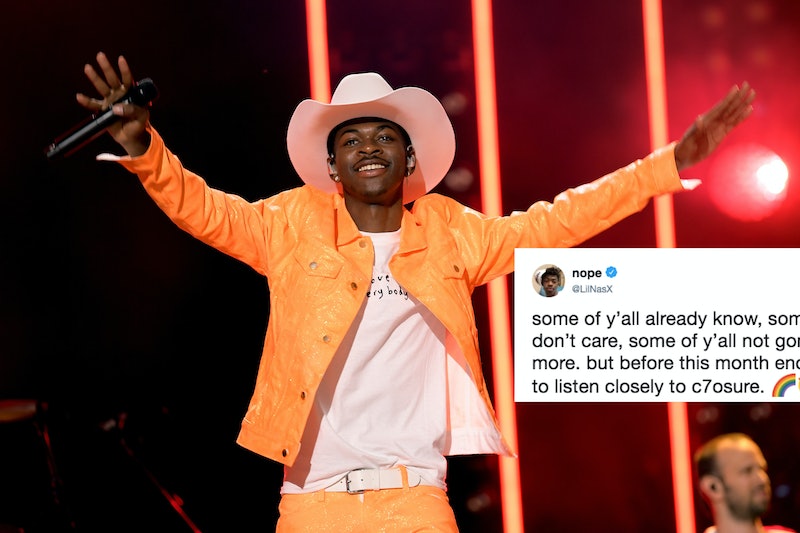 Pride Month 2019 may have officially come to a close with World Pride Day on Sunday, June 30, but for Lil Nas X, it's only the beginning. That same day, Lil Nas X came out on Twitter by urging fans to look closely at the lyrics to "C7osure," the last song on his new EP, 7.

The "Old Town Road" singer made his coming out very low-key, implying that he's proud of his sexual orientation no matter the public response. Attaching the YouTube official audio of "C7osure" to his tweet, he wrote,

Listening to "C7osure" does, in fact, illuminate Lil Nas X's thoughts on his sexuality, as the whole song is about allowing himself to grow and living his life the way he wants to rather than being held back by his past or fear that he might be taking this step too early. He sings:

"Ain't no more actin', man that forecast say I should just let me grow / No more red light for me, baby, only green, I gotta go / Pack my past up in the back, oh, let my future take a hold / This is what I gotta do, can't be regretting when I'm old"

The video paired with the official audio is the perfect companion to this sentiment: It shows a cartoon version of Lil Nas X in black-and-white, watching miserably as his family fights over the dinner table. Lil Nas X then leaves that past behind for a future that bursts into color, with him relaxing on a beach and looking much happier. It's a representation of the "brand new places" the song mentions:

Despite the serious subject matter, Lil Nas X is known on Twitter for his sense of humor, and this time was no exception. He followed up his initial tweet with another that pointed to his album cover as a sign of his coming out, since it features a building with a rainbow painted on it among a city skyline. "deadass thought it made it obvious," he joked.

Lil Nas X then responded to some fans' reactions to the news, most of which were positive. He retweeted this fan tweet, which also featured a rainbow:

He also poked fun at another fan's typo:

He did, however, take the time to shut down some of the sexual "Old Town Road" jokes that followed his coming out:

Lil Nas X has blended hip-hop and country throughout his career, most notably with "Old Town Road." Those are two areas of the music industry that have been criticized for homophobia, so to see Lil Nas X not only publicly come out, but also remain a thriving artist in both genres ("Old Town Road" is on week 13 at #1 on the Billboard Hot 100), while staying so carefree and happy, is seriously heartening. Here's hoping he's opened the door for more artists like him to be celebrated.