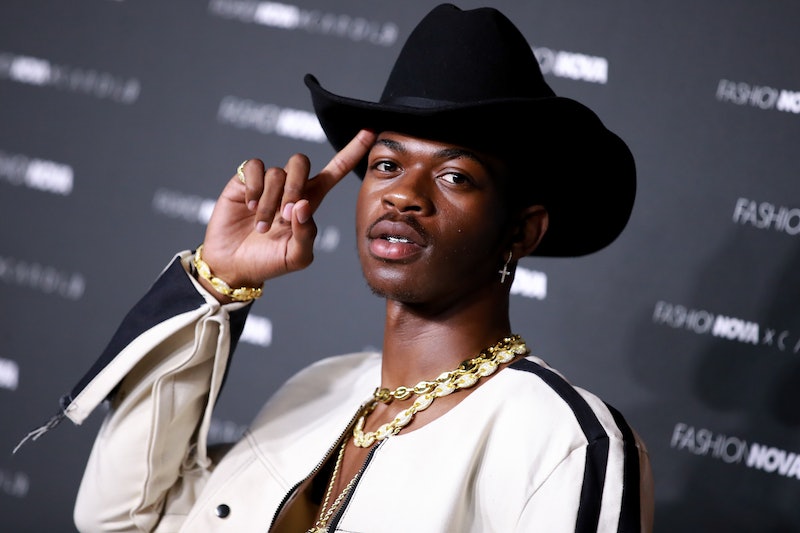 Lil Nas X is going to ride "Old Town Road" 'til he can't no more, and he doesn't plan to stop recording genre-crossing songs anytime soon. The hit track combined elements of both hip hop and country, but it wasn't country enough to remain on the genre charts. Lil Nas X isn't bothered by the Billboard controversy, though, as he recently revealed to Teen Vogue. In fact, the attention it garnered was the silver lining to a somewhat problematic situation.

So, in early March, "Old Town Road" kind of came out of nowhere and almost instantly swept the nation. It became a bonafide smash when it debuted on three different Billboard top charts at the same time, including the Hot 100, Hot R&B/Hip Hop Songs, and Hot Country Songs.

However, shortly thereafter, Billboard quietly pulled the track from their Hot Country Songs chart. "When determining genres, a few factors are examined, but first and foremost is musical composition," Billboard explained in a statement, as reported by Spin. "While 'Old Town Road' incorporates references to country and cowboy imagery, it does not embrace enough elements of today’s country music to chart in its current version."

The removal raised a few eyebrows at the time, with some questioning whether or not their reasoning was adjacent to race. (Billboard, for their part, denied that insinuation in a second statement, noting that their decision "had absolutely nothing to do with the race of the artist," per Spin.)

"I had this idea in mind at first, but then as I went on to think about it, I was like, maybe because [the] country [music industry] is guarded," Lil Nas X told Teen Vogue of Billboard's decision. "You can have your country song with trap elements, but if it’s by known country artists, then it's allowed. A black guy who raps comes along, and he's on top of the country chart, it's like, 'What the f*ck?'"

Despite his frustration, the star told Teen Vogue that he's never felt as if the controversy with "the Billboard situation [overshadowed] the song" itself. "By me being involved in something like that, it doesn't make me feel bad," he went on to explain. "It makes me feel even more accomplished in a way."

Considering that the song has continued to garner support from both hip hop and country artists alike, it's not hard to see why he's embraced the attention from the genre debate. In the time since the track became a certifiable hit, Lil Nas X has recorded a remix of "Old Town Road" with Billy Ray Cyrus, he's performed the song on stage alongside Cardi B, and gained a very famous fan in Kim Kardashian and Kanye West's eldest daughter, North.

Country-rap isn't the only trick Lil Nas X has up his fringe-lined sleeves, though. While he's not opposed to putting out another song in that style, he told Teen Vogue that, "Nothing is off limits" when it comes to future music. For example, the next track he's promised to drop — titled "Panini" — is loaded with bass and elements of rock.

So, go ahead and saddle up for more from Lil Nas X. He's definitely not ready to ride into the sunset just yet.

More like this
Cardi B Explains To David Letterman Why She Uses Her Star Power For Politics
By Jake Viswanath
Watch The Dramatic First Trailer For Netflix's Jennifer Lopez Documentary
By Alyssa Lapid
The Very Best Quotes From Dr. Taylor Swift’s NYU Graduation Speech
By Grace Wehniainen
Kourtney & Travis Crashed His Daughter’s TikTok Live In Their 2nd Wedding Outfits
By Grace Wehniainen
Get Even More From Bustle — Sign Up For The Newsletter