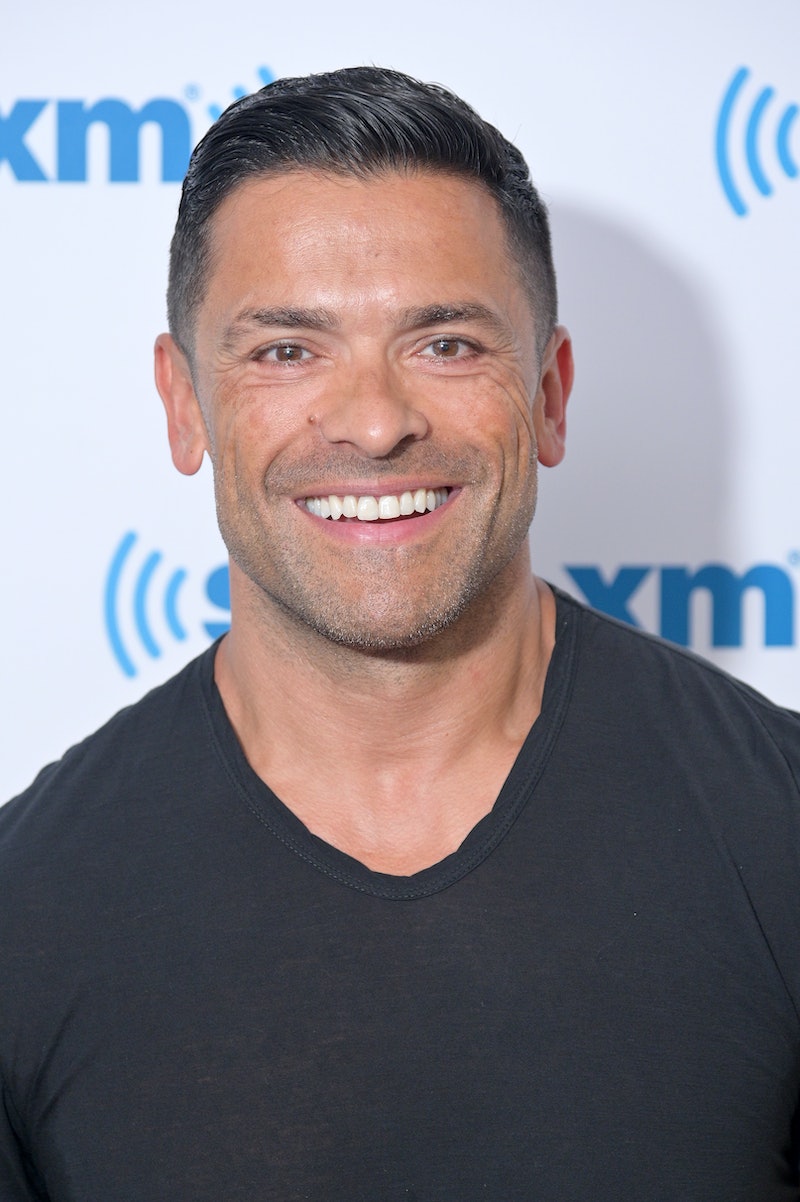 Even though Riverdale is in between seasons, there is some new Bughead content for the fans to discuss. Unfortunately, it's not the best news though. Betty and Jughead's real-life counterparts ended their relationship after two years. Their Riverdale co-star Mark Consuelos discussed Lili Reinhart and Cole Sprouse's rumored split during a conversation with his good pal Andy Cohen on his SiriusXM radio show. (Bustle has reached out to Reinhart and Sprouse's reps for comment, but didn't receive a response.)

As the interviewer, Cohen was looking for some inside scoop from Consuelos, but he didn't have much or at least he didn't divulge any inside information. Nevertheless, the friends' conversation was very funny. Cohen began, "Speaking of lovers, Cole Sprouse and Lili Reinhart split in real life." In response, Consuelos asked "Is that true?" Did he really not know? Or was he playing it cool?

The Radio Andy host informed Consuelos, "That's what is being reported." The Riverdale actor went on to explain, "You know I've been gone from Vancouver for about ten days so I have no idea what's going on over there." For anyone out of the loop, the show does film in Vancouver, Canada.

Cohen wasn't buying what Consuelos was selling about having "no idea what's going on." Cohen told his friend, "No, you don't, even though maybe you do and you're not going to say." It's most likely the latter.

Cohen didn't let the lack of tea deter him from inquiring more. He continued to (attempt to) discuss the rumored breakup. He pointed out, "Now, the other thing is that the whole time they were dating, no one was allowed to say that they were dating."

Consuelos asked "What do you mean?" He elaborated, "Well, like, when she was on [Watch What Happens Live], we weren't allowed to ask her about [the relationship]. After talking about how "surprising" that was, Cohen wouldn't drop the subject. He was determined to get the scoop, which is why his fans love him.

Clearly, the Riverdale star is not going to sell out his coworkers, but props to Cohen for trying his best to get the accurate information. Cohen continued, "And they never talked about it publicly, yet they would post stuff about each other. Do you have any knowledge of that?"

Consuelos responded, "No, I just kind of always knew that they were together. When I joined the show, it was already a thing. I came on second season, so I don't know what happened the first season."

Now that Reinhart and Sprouse are not together, it might actually be a good thing that they did not discuss their relationship privately. Cohen reflected, "Maybe they just wanted to keep it to themselves."

Their secrecy during their relationship might actually be helpful when it comes to the public speculation about their split. However, that's not going to stop people from talking about it, especially Andy Cohen and the other Riverdale fans.

Earlier this week, it was reported by multiple media outlets that Sprouse and Leinhart had split after two years together. Us Weekly reported that the two actors reportedly kept their distance from each other at a Comic-Con party and someone reportedly claimed to hear Sprouse say that he and Reinhart broke up.

Although Consuelos didn't divulge any private information, he did point out something very funny. He said, "I think about giving [them] advice like 'Do you really want to date your co-star?' and look at me. I married my co-star." Yes, he did. Consuelos married Kelly Ripa after meeting on the set of the soap opera All My Children. So, maybe he isn't the best person to tell the Riverdale cast not to date each other.

It's unclear if Consuelos is truly out of the loop or if he just wanted to respect Sprouse and Reinhart's privacy, but at least he acknowledged that he, of all people, can't fault anyone for dating a coworker.