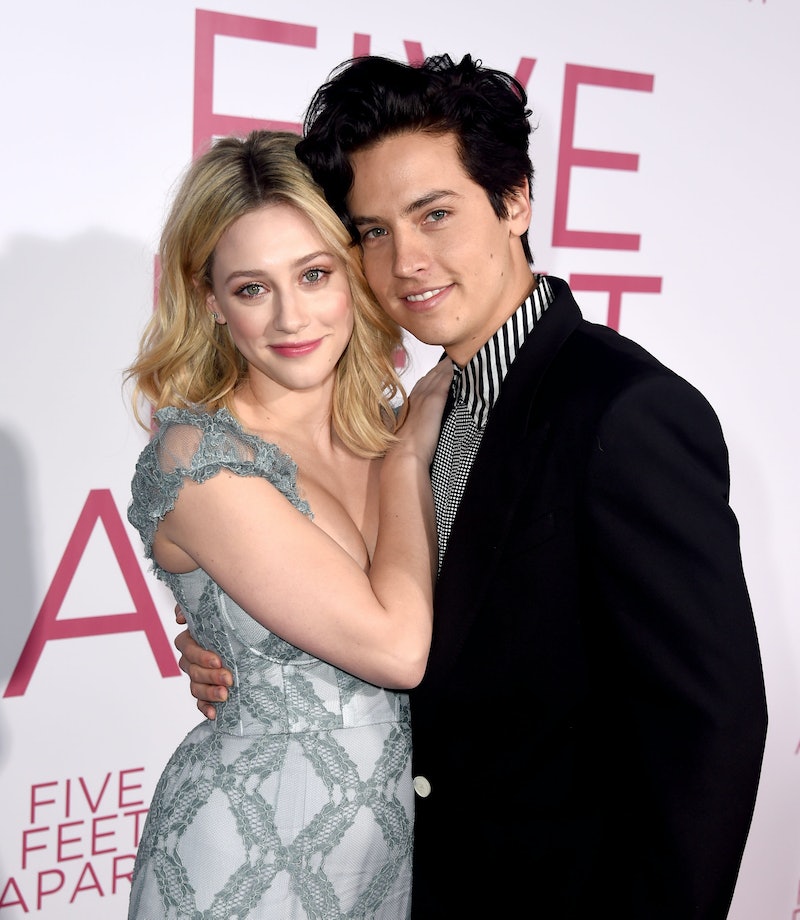 Bughead fans aren't going to take this news lightly. Riverdale stars Lili Reinhart and Cole Sprouse split after almost two years together, according to a July 22 report from Us Weekly. Bustle has reached out to both of their reps for comment, but didn't receive an immediate response.

Sources who spoke with Us Weekly claim Reinhart and Sprouse, who play couple Betty and Jughead in The CW drama, kept their distance from each other during Entertainment Weekly's 2019 Comic-Con party in San Diego on July 21. They were supposedly hardly seen side by side at the event. Sprouse reportedly was also heard telling someone that the two had gone their separate ways romantically. The former Disney Channel actor apparently even left the party with costars KJ Apa and Camila Mendes, but Reinhart wasn't with them.

Neither Sprouse nor the Hustlers actor have commented on the breakup rumors. And if they decide to address reports in any way, it will certainly be on their own terms. It's no secret that the two are extremely protective of their privacy. They both have made it clear in the past that their relationship is their own and for them to share whenever they feel comfortable in doing so.

As for their time together at 2019 Comic-Con and whether or not they were truly broken up during the major event, they appeared to still be on good terms. On Monday, Reinhart posted an Instagram with Apa and Sprouse from Riverdale's panel. She hilariously captioned it, "Please don’t put me between these two ever again." She also shared an image with the cast, including Sprouse, taken by EW and wrote,

"Comic Con always reminds me how lucky I am to be part of something so special and thankfully it’s with these beautiful people. Thanks for coming out to see us this weekend [heart emoji]"

If that isn't enough, on July 22 not long before breakup rumors made headlines, Reinhart posted an image of herself with Sprouse from Comic-Con on her Instagram Story. She repeatedly zoomed in on his face and concluded the funny posts with the following photo that she captioned with "Help lol."

It's hard to say for certain if the two really did split, but, again, they aren't the type to discuss their personal life freely and openly. Like Sprouse told GQ in February, "I think social media and the Internet reward extremes. I'm a firm believer that a lot of that experimentation should be done in private. Ultimate privacy." He later added about his romance with Reinhart, "It's not something that we hide, or it's not something that we show off. It's just something that exists."

Reinhart echoed Sprouse's sentiments in a 2018 chat with Seventeen. She said, "It's called a private life for a reason — it’s mine, and it’s special and sacred. My relationships are between me and whomever I’m with, not between me and the world."

Whether or not the Riverdale stars did break up, their privacy shouldn't be violated. Sprouse and Reinhart have repeatedly expressed how important it is for them to open up about their lives on their own terms, so let's continue to treat them with the love and respect they deserve.

More like this
All The Clues About Aly & Zach’s Relationship Status After 'The Bachelor'
By Brad Witter
9 Photos Of Celebrity Couples & Unexpected Duos At The 2023 Grammys
By Jake Viswanath
Bennifer's Relationship Timeline Now Includes A Grammy Date Night
By Jake Viswanath
The History Of Taylor Swift's "All Too Well" & What The Lyrics Actually Mean
By Jake Viswanath
Get Even More From Bustle — Sign Up For The Newsletter
From hair trends to relationship advice, our daily newsletter has everything you need to sound like a person who’s on TikTok, even if you aren’t.