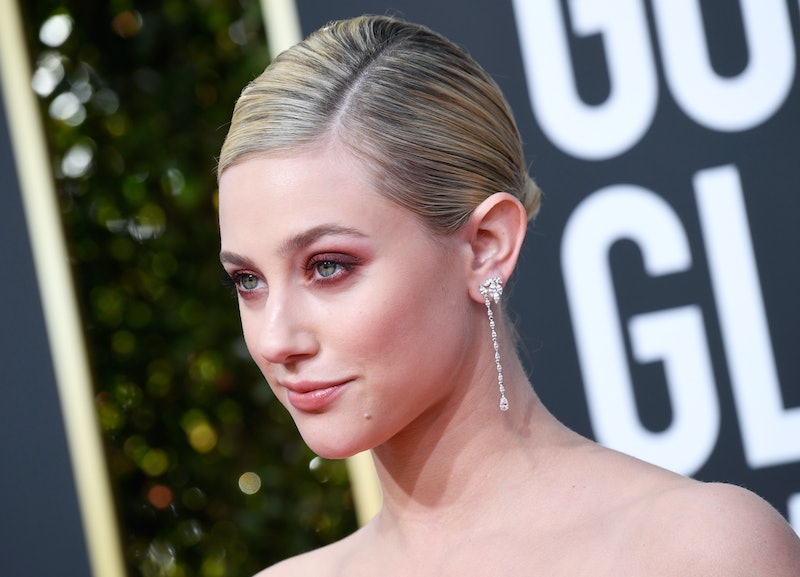 The world is still reeling from the news that on Monday, Luke Perry died at 52 after having a stroke last week, including his fellow Riverdale cast members. And now, one of them is speaking out about what grieving his death feels like to her. On Monday night, Lili Reinhart shared an emotional message about Perry on her Instagram Story, and it shows how much her costar truly meant to her.

In the series of text posts, Reinhart wrote about what it feels like to watch the world keep moving around her, even as her own world seems to have stopped as she's experiencing such a great loss. She wrote:

"Its [sic] strange to see the world move on when someone you love gets taken from you. And the small circumference surrounding you is stuck. Frozen in a moment. Of loss. And shock. Yet the people passing you are moving at full speed. Did they not feel the earth shake? Or slow? Can they hear the thoughts screaming in my head? His name. His face. Memories. Flashes. Of a friend. A lost friend. We always expect the earth to stand still. For the universe to grieve the loved one we have lost, along with us. But it keeps moving. Maybe as a sign that we should too. The movement of strangers, like a wave, taking us with them."

She ended her message by writing that she hoped that "the one we've lost" is there guiding her, even in those moments where she feels like she has nothing left to give. She continued:

"So we ebb and flow with the passage of others, coasting off their energy and conserving our own. Because it's too hard to give anything right now. To anyone. Except for him. The one we've lost. And I pray that he's silently moving in tandem with us. Guiding us through the waves even when we can't swim."

Shortly after the news of Perry's death broke on Monday afternoon, Reinhart took to Twitter to share that she was thinking of Perry's family and children.

"I'm finding it hard to grasp that he will no longer be around to give long hugs and share his wisdom and kindness with all of us," she wrote. "I'm thinking of his family. His children. I pray for them to heal and find peace in this devastating loss."

"I just can't believe it," she added later.

Last week, Reinhart shared a photo of her and Perry together, wishing him a safe recovery after his stroke. But just days later, his rep confirmed that he had passed away on Monday, releasing the following statement to Bustle:

Based on the outpouring of love from not just Perry's Riverdale costars, but from celebrities and fans everywhere, it's easy to see that he will be so missed. Perry might be gone, but he will definitely never be forgotten.