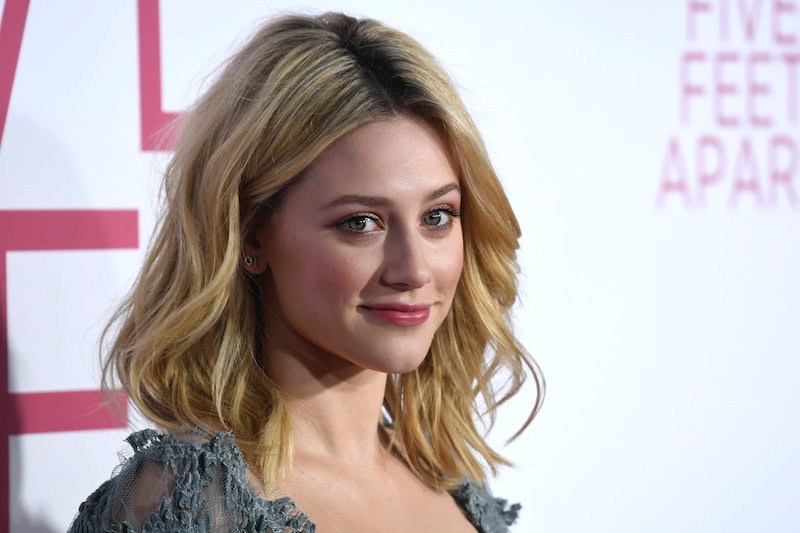 Betty Cooper’s IRL counterpart is set to executive produce her very first film. Riverdale star Lili Reinhart will star in and produce a new romance drama, Chemical Hearts. The actress has partnered with Amazon Studios for the coming-of-age drama, based on the novel Our Chemical Hearts by Krystal Sutherland. The film, which will debut on Amazon Prime Video, will follow Henry Page, a 17-year-old hopeless romantic who has never been in love since "the once in a lifetime kind of love that he's been hoping for just hasn't been in the cards for him,” as per the press release sent to Bustle. While he focuses his attention on becoming editor of the school newspaper, Henry meets new girl in school Grace Town (Reinhart) on his first day of senior year, and “knows everything’s about to change.” Wow, this sounds nothing like Betty and Jughead’s teen romance set against the backdrop of murder.

While a release date for Chemical Hearts has not been set yet, the project accommodates talent that has worked on noteable coming-of-age films. Chemical Hearts will be produced by The Florida Project's Alex Saks and executive produced by Eight Grade's Jamin O’Brien, as well as Reinhart. The film will be written and directed by Richard Tanne, whose first feature film was the Barack and Michelle Obama romance drama Southside With You.

On Friday, June 14, Reinhart took to social media to confirm the news. The Riverdale actress shared a screenshot of her new project as fans and celebrities (we see you, Tan France!) alike heralded the actress on her new venture as an executive producer. She captioned the announcement with a celebratory emoji.

In the film's press release, Julie Rapaport, Co-Head of Movies at Amazon Studios, said of the film, “We are thrilled to work with this talented team to bring to life a beautiful story of first love and heartbreak. Krystal Sutherland’s novel captured the hearts of readers around the world, and we are excited to bring this film to our global Prime Video customers.”

Chemical Hearts marks the latest in a string of busy projects for Reinhart. The Riverdale actress will next star opposite Jennifer Lopez and Constance Wu in Hustlers, slated for a September release. The film is based on an article from The Cut titled “The Hustlers at Scores,” which follows a group of strip club employees who join forces to turn the tables on their wealthy Wall Street clients. Along with Wu and Lopez, Reinhart will also star opposite Cardi B and Lizzo in the film. And, of course, the actress will also reprise her role as Betty Cooper in the CW’s dark teen drama Riverdale, which was renewed for a fourth season.

Reinhart’s transition into producer should come as no surprise to fans. In a November 2018 interview with Vogue, the actress told the publication about her desire to dive into feature films.

“I see myself hopefully doing a lot of feature films…I feel like I’m more drawn to things that are very dramatic, you know, slow, and kind of have a slow burn and take their time,” she said. “I want to show my range of what I can do as an actor.”

With her new role as executive producer, fans are sure to get a glimpse of Reinhart's range. Let's just hope Gargoyle Kings don't reside in the same cinematic universe of Chemical Hearts.