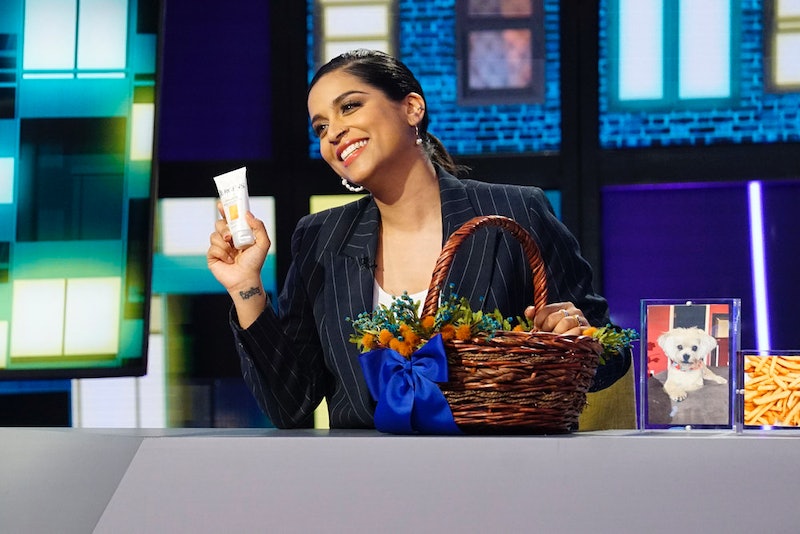 Lilly Singh has broken new ground at NBC — again. During an episode of her new talk show A Little Late, which aired on Tuesday, Lilly Singh addressed the new Matt Lauer allegations. And, in doing so, she reportedly became the first late night personality at NBC to mention Lauer after the new accusations, and she didn't hold anything back.

New allegations against Lauer emergedearlier this month with the publication of Ronan Farrow's Catch and Kill. The book detailed new allegations that Lauer raped his former NBC News colleague, Brooke Nevils, when they were working together in 2014. And after the detailed allegations surfaced on Oct. 9, Lauer released a letter denying any claims of non-consensual sex with Nevils, claiming that he "had an extramarital affair" with her in 2014. He wrote that the allegations were "categorically false, ignores the facts, and defies common sense."

Since then, allegations against Lauer have been in the news, but the former Today show co-host hasn't been a major topic of late night comedy scrutiny — until now. On Tuesday, Singh went after Lauer in her recurring “Gift Baskets” segment, where she presents notable figures in the media “who've been having a hard time” with mock gifts to cheer them up. She felt Lauer deserved one after being "fired from this network after several allegations came up accusing the former news anchor of sexual assault, which he denies all of the claims,” as she told her audience.

Her first gift was a bottle of Jergen’s lotion — “because the only thing that will be getting you off anytime soon is your own hand.” Singh's next gift was a button, much like the one Lauer allegedly had under his desk to lock his office door. Except, according to Singh, this button “locks your penis in your pants.” (Lauer has since denied that he had any such button, writing in his open letter, "It didn’t exist.")

Singh's final gift to Lauer was a direct response to his open letter. “I just read your open letter, where you not only refuse to take responsibility for your heinous actions, but you also blame your victims — yeah plural, victims — for your bad behavior,” she stated. She then pulled out two envelopes from the basket. “Matty boy, since you love letters so much, I got you two,” she added, revealing the letters F and U from inside the envelopes. “Would you look at that? It’s an F-U.”

Interestingly, Singh's jabs come at the same time that Lauer is meeting with members of the press. A self-proclaimed "contrarian journalist" John Ziegler recently met with Lauer at his New York home, and while their conversation was off-the-record, he argued in an opinion piece for Mediaite that Lauer had some important things to say. Ziegler is also appearing on Extra to talk about his private interview with the disgraced anchor, which could suggest that Lauer himself is getting ready to speak to the press. Bustle has reached out to a representative for Lauer for comment on his meeting with Ziegler and Singh's bit, but did not receive an immediate response.

More like this
Here’s What Happens To Bill & Frank In 'The Last Of Us' Video Game
By Brad Witter
'The Crown' Season 6 Has Suspended Filming "Out Of Respect" For The Queen's Death
By Bustle Staff
Turns Out George Clooney Is A Huge Fan Of This Classic British Game Show
By El Hunt
10 Photos Of The Wildest Limo Arrivals From 'The Bachelor' Premiere
By Brad Witter
Get Even More From Bustle — Sign Up For The Newsletter
From hair trends to relationship advice, our daily newsletter has everything you need to sound like a person who’s on TikTok, even if you aren’t.