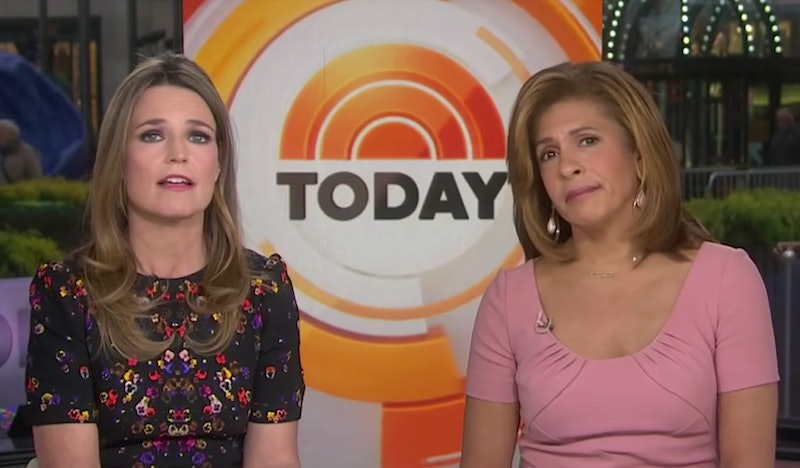 Hoda Kotb and Savannah Guthrie are not shying away from covering uncomfortable news, even if it involves a former colleague. The Today hosts responded to the new Matt Lauer allegations by supporting the victim, Brooke Nevils, during their Oct. 9 morning broadcast. On Oct. 8, Variety reported that Farrow's upcoming book Catch and Kill — which chronicles his investigation of Harvey Weinstein and the obstacles he faced from his then-employer, NBC News — features an interview with former NBC News employee Nevils. In the book, Nevils reportedly alleges that Lauer raped her in his hotel room during the 2014 Sochi Olympics — allegations that eventually led to his termination from the network.

UPDATE: Matt Lauer responded to these allegations in a letter obtained by Variety, denying any claims of non-consensual sex. He wrote in part:

In a new book, it is alleged that an extramarital, but consensual, sexual encounter I have previously admitted having, was in fact an assault. It is categorically false, ignores the facts, and defies common sense.

Lauer claimed that he "had an extramarital affair with Brooke Nevils in 2014," but insisted that any sexual acts were "completely consensual."

EARLIER: In 2018, Lauer released a statement to The Washington Post that denied any allegations of assault, saying, "I want to make it perfectly clear that any allegations or reports of coercive, aggressive, or abusive actions on my part, at any time, are absolutely false." Meanwhile, in response to this new report, NBC News released a statement to the Today show stating, "Matt Lauer's conduct was appalling, horrific and reprehensible ... and that's why he was fired within 24 hours of us first learning of the complaint. Our hearts break again for our colleague."

After the allegations in Farrow's book were reported on the Today show on Wednesday morning, Guthrie told viewers that she and her co-anchor, Kotb, were "disturbed" by the reports and that they stood with Nevils. Describing the allegations as "shocking and appalling," Guthrie continued, "I know it wasn’t easy for our colleague Brooke to come forward then. It’s not easy now. And we support her and any women who come forward with claims. It’s just very painful for all of us at NBC and at the Today show, and it’s very, very difficult."

Kotb also spoke about the allegations, noting that they were "not allegations of an affair, [but] they're allegations of a crime." The co-host, who replaced Lauer as co-anchor at this hour, added, "Our thoughts are with Brooke. It’s not easy, what she did, to come forward; it’s not easy at all."

According to Variety, Farrow's book is the first time that Nevils has gone public with her allegations, as her identity was kept anonymous in the wake of Lauer's firing at her request. In Catch and Kill, she recounts the alleged incident, which occurred while she was in Sochi, Russia, working with former Today anchor Meredith Viera on Olympics coverage.

In the book, Nevils claimed that, in his hotel room, Lauer allegedly pushed her up against the wall to forcibly kiss her before pushing her onto the bed and anally raping her. "It was nonconsensual in the sense that I was too drunk to consent," Nevils told Farrow in Catch and Kill. "It was nonconsensual in that I said, multiple times, that I didn’t want to have anal sex." Upon her return to New York, Nevils allegedly had more sexual encounters with Lauer, and once they ended, she moved to NBC’s Peacock Productions to be a producer, where, Nevils claimed she told "like a million people" about what happened.

In 2017, Nevils told her former boss, Viera, about the alleged incident, who reportedly insisted that she report the allegations to NBC News Human Resources with a lawyer. According to the network, Lauer was fired "within 24 hours" of Nevils' complaint, and several more instances of alleged sexual misconduct were reported by Variety soon after.

The day after he was fired in 2017, Lauer released a statement admitting there was "enough truth in these stories," and apologizing for "the damage and disappointment I have left behind at home and at NBC."

More like this
Twitter Is Saying The Same Thing About Jill Scott Winning 'I’m A Celeb'
By Sophie McEvoy
Matt Hancock’s Net Worth Is A Political Minefield
By Maxine Harrison
Jill Scott’s Millions Are Still Coming Home
By Darshita Goyal
The First Trailer For 'That '90s Show' Includes So Many Nods To The Original Series
By Jack Irvin, Alyssa Lapid and Grace Wehniainen
Get Even More From Bustle — Sign Up For The Newsletter