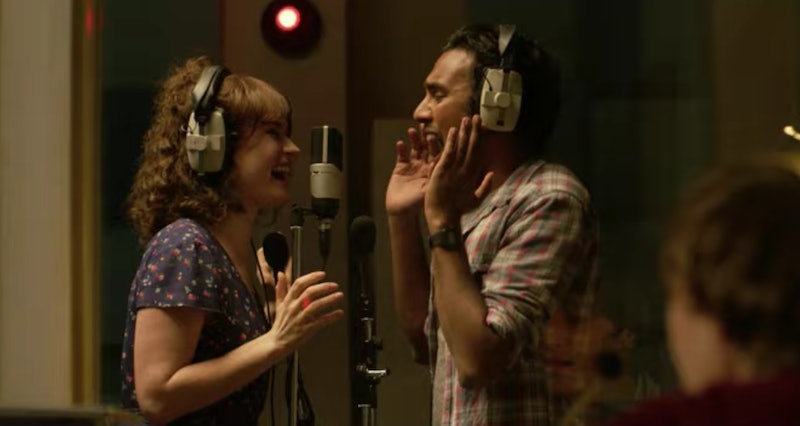 Yesterday, in theaters June 28, imagines a reality where The Beatles never existed, thanks to a world-altering blackout. Only big box store working and aspiring singer-songwriter Jack Malik (Himesh Patel) seems to remember the band and their music. As he rises to fame by playing their songs, his sudden success changes his relationship with his best friend and manager Ellie (Lily James) who harbors feelings for him. But beyond being a love letter to The Beatles, and beyond telling a love story between two people, Yesterday is also a love story about family, community, and true friendship, according to James.

The film starts out in Gorleston-on-Sea, a small seaside English town. It's the home of Jack, his loving but distant parents, and his tight-knit group of friends, including Ellie, a school teacher who has been a fan of his music since she and Jack were in school together.

"I enjoyed living in a small town, getting out of London, living by the sea, and imagining what it is to grow up in a village and stay there your whole life, and be really part of the community, because I think we’ve lost that in our world now," James says, speaking over the phone in late May. "Like, feeling really united and a sense of togetherness, and a sense of taking care of the community around you. I feel like Ellie was rooted in something I really admire, and I think something we’re maybe losing touch with."

When you first meet him, you get a sense that Jack — who is unsatisfied with both his day job and his small gigs — always feels defeated and alone, blind to the support of the people around him. But as the film progresses, he realizes that his parents, Ellie, and the rest of the gang have always been there to support him, no matter his celebrity status and stops taking them for granted.

There's genuine warmth in every scene that includes these supporting characters. James credits this to screenwriter Richard Curtis, the scribe also behind Love Actually, Four Weddings and a Funeral, and About Time.

"He has a way of creating friendship groups and families that feel real, whether you recognize yourself in them or just recognize attributes that they have or the dynamic between friends," she explains. "I think he really does that like no one else."

James is also a fan of the way Curtis writes romantic love, of course. "Whenever I see one of his films on the TV I can never turn it off," she explains. "I think 'Oh, I’ll just look at it for 20 minutes.' And then I sat there, till the end, crying my eyes out."

James is in a relationship with Doctor Who and The Crown star Matt Smith, but she hasn't always been lucky with love. She recognized the unrequited love Ellie feels for her best friend Jack and shows by being his cheerleader, his confidante, his manager, his driver, and everything else in between. But when Ellie confronts Jack and tells him about her feelings, he freezes, and doesn't know how to respond.

"I think you’d be hard-pressed to find anyone that hasn’t loved someone that breaks [your heart]," James says. "Especially in my teens, I fell in love with someone everyday. My whole diary [was] basically, 'I love him, but he doesn’t love me!'"

Jack's obliviousness can be frustrating, but James also understands why Ellie puts up with it... for a while. "Love is irrational," she says. "The heart wants what it wants." But she also says that she related to Ellie reaching her breaking point with the whole thing, "where she realizes, 'What the hell am I doing? I’ve been waiting all this time.'"

Spoilers ahead. Ellie does decide to let Jack go, though in the end, he also realizes that it's community, friends, and family that he values and he goes back home. He gives up his viral rock star status to be with those he loves most — including Ellie. But if James were in the main character's shoes, the story would've gone a lot differently. "I would've sung the songs, taken the money, bought a massive pad in L.A.," she jokes. "Really milked it."

Jack and Ellie's happiness doesn't bring back The Beatles, however, or any of the other things lost in the mysterious blackout, like Coca-Cola and cigarettes. If the choice were up to James, she says she'd wipe "plastic and Brexit" off the face of the earth. As for what she would miss the most: "I wouldn't want chocolate and red wine to disappear," she says. "That would be a really sorry, sorry thing if that happened."

Sorry indeed, but James would still make it work. Because at its heart, Yesterday is a story about finding happiness and love wherever you feel most at home — even if the world has turned upside down around you.