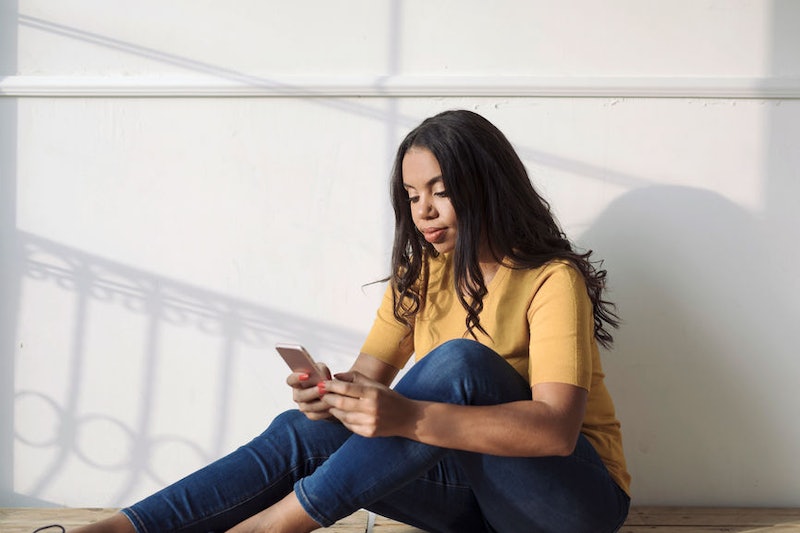 By now, most people have heard the arguments that social media can have a negative impact on mental health. But that doesn't mean it's easy to renounce the platforms altogether, particularly as they now play such a fundamental role in how we stay connected to each other. Fortunately, a new study suggests that you needn't shut down all your accounts to reap the mental health benefits; in fact, simply limiting your social media use can improve your wellbeing. Scientists at the University of Pennsylvania asked undergraduate students to cut down their time spent on social media to a total of 30 minutes per day — and saw a significant improvement in their mental health.

The connection between social media use and poorer mental health is a vigorously debated one, as Bustle has previously reported. Studies have associated the use of social media with an increase in symptoms of anxiety, and linked Facebook use with a decline in wellbeing. A 2015 study from the Pew Research Center suggested that using social media might make you more stressed — but confusingly, it can also serve as an outlet for your stress. And some, like Guardian columnust Dr. Frances Ryan, have noted that access to social media can be vital for disabled people and members of other marginalised groups.

So what did the University of Pennsylvania study indicate? The researchers divided 143 student participants into two groups: a control group, who weren't asked to alter their social media usage, and an experimental group, who were asked to limit their use of Instagram, Facebook, and Snapchat to 10 minutes on each platform per day. They completed a wellbeing survey both before the study began and after four weeks of adhering to their assigned social media limits, rating aspects like access to social support, fear of missing out (FOMO), anxiety, depression, self-esteem, and loneliness.

At the end of the study, the students who restricted their social media use demonstrated significantly lower levels of loneliness, and those who indicated a high level of depression at the start of the study experienced a "clinically significant" reduction in their symptoms. There was no significant difference between the control group and the experimental group when it came to levels of anxiety, social support, fear of missing out, or self-esteem, however.

Another interesting finding? Overall, both groups — even those who weren't asked to limit their social media use — showed a decrease in fear of missing out and anxiety. The researchers hypothesised that this could be "a result of the self-monitoring inherent in the study," as both groups were asked to send screenshots of their iPhone battery usage pages to measure how much time they spent on each app. So if a 30 minute social media cap sounds too restrictive for you, you might still experience some benefits just by keeping an eye on the time you spend online.

The researchers concluded that "limiting social media usage does have a direct and positive impact on subjective wellbeing over time, especially with respect to decreasing loneliness and depression." Suspect that social media is negatively affecting your mental health? You might just have found your New Year's resolution.