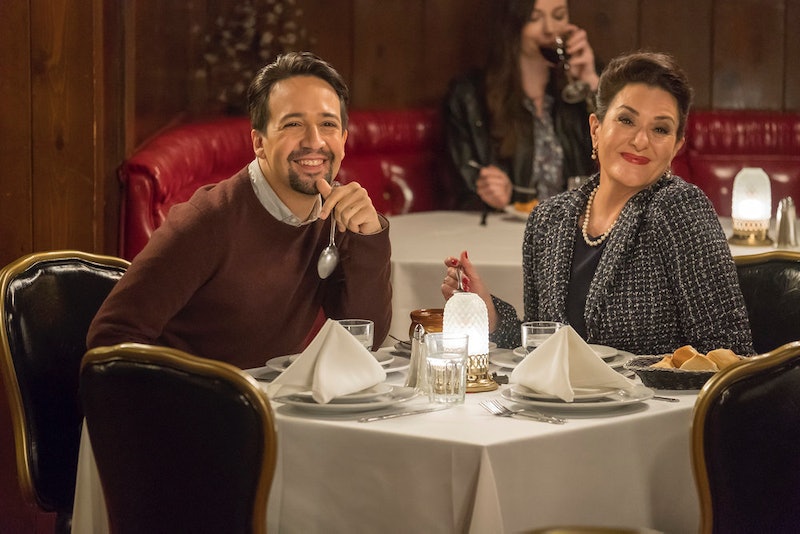 Spoilers ahead for Brooklyn Nine-Nine Season 6, Episode 9. In a much-anticipated episode, Lin-Manuel Miranda guest starred on Brooklyn Nine-Nine this week as Amy's brother, David. While in real life, the actor/composer is earnestly kind, Miranda's Brooklyn Nine-Nine character, David Santiago, is much more...combative. It's no secret by now that Amy Santiago (Melissa Fumero) is competitive, but her intensity turns out to be child's play compared to her brother, who's also a police officer.

Viewers learn that although Amy has seven brothers, she doesn't get along with David because he's "the golden child." And their parents didn't help matters — the Santiagos rank their children's photos in order of who makes them the proudest, and David's is always placed on the coveted mantle, while Amy's portrait collects dust on the piano. And if B99 fans know anything about her character, is that no one puts Amy in a corner!

But it's difficult to compete with someone as perfect as David. Not only does he tell a riveting story during dinner about coaxing an Oscar-winner off of a ledge, but he's also a perfect shot, explaining that he got his platinum certification, one-upping Amy's gold certification news. He's tedious to say the least. In fact, here are the most obnoxious things David says and does during the entire episode. Buckle in, because there's a lot.

He Arrives A Full Hour Early For Dinner

Punctuality is great and all, but at a certain point, it's just showing off. And the way that David slurps his French onion soup — which he and his mom split while waiting for Amy and Jake — is nothing but smug.

"[The lieutenant exam] actually wasn't something I was planning on taking, but then my partner got sick, and I wanted to be able to send home extra money to his wife and kids," David explains, faux-modestly, at dinner. "Then, I read the MRI — he was totally misdiagnosed! So, long story short, Bo is alive, and I got a perfect score on a test for no reason." This news obviously distresses Amy, who also dreams of becoming a lieutenant one day.

He Gives An Incredible Heimlich

This is a great and life-saving skill to have, but since Jake is only pretending to choke on a dinner roll so Amy can intervene, David's medical savvy proves to be an inconvenience. But even though he breaks one of Jake's ribs in the process, the entire restaurant gives the policeman a standing ovation.

He's Not Even A Drug Addict

Like, the least David could do for Amy's self esteem is to secretly be a dirty cop, but the opposite is actually true. The sergeant is over-the-moon when her brother is arrested for cocaine possession, but as she later discovers, he's being framed by the Brazilian mob. David explains that he's been investigating dirty cops, who are being paid off by said mobsters. Much to Amy's disappointment, they're the ones who planted the coke in his desk.

David repeats this sentiment several times over the course of the episode, at one point revealing that he doesn't even own a TV.

As he explains to Jake and Amy, there's no way he'd ever be a coke addict. After all, he doesn't even drink coffee because he has "too much respect" for his body. We get it, David! You're amazing!

He's Even Allergic To Chia Seeds

Listen, food allergies are no joke, but that Amy and her brother argue about how many things they can't eat is hilarious. Also on the list? Stone fruit and açaí berries. As Jake points out, it's a weird thing to brag about but apparently effective.

It's spell-binding to watch the two Santiago siblings angrily — and terribly — dance battle each other. As Jake exclaims after seeing David flail his arms like a drunk flamingo, "She's got a shot!"

Even His Compliments Are Great

Although the two siblings don't exactly become best friends, Amy realizes that when her husband's safety is on the line (which it is, thanks to the incredibly hot Brazilian mobsters), she wants the best person on the case — and that's David. So while we don't learn any substantial character flaws in this episode, at least we know that he's an awful dancer, and that's some comfort.

But who among us didn't feel the same way as Amy's brother, who smugly ate dinner rolls while Jake gave his mother-in-law a piece of his mind? In this respect, we are all David.

As obnoxious as he is, this thankfully might not be the last time we see David Santiago, as Brooklyn Nine-Nine co-creator Dan Goor hinted on Twitter. So whether or not Amy and her brother ever put aside their glaring similarities or not and hit the dance floor as equals, it certainly makes for entertaining television.

More like this
Meet The New Team Of Residents Joining 'Grey's Anatomy' In Season 19
By Brad Witter and Sophia Moore
Everything To Know About Netflix’s 'Never Have I Ever' Season 4
By Jack Irvin and Gabrielle Bondi
An Ultimate Guide To The Music Of 'Rap Sh!t'
By Brad Witter
Josh Peck Shows Love To Jennette McCurdy After Her Shocking 'iCarly' Revelations
By Radhika Menon
Get Even More From Bustle — Sign Up For The Newsletter