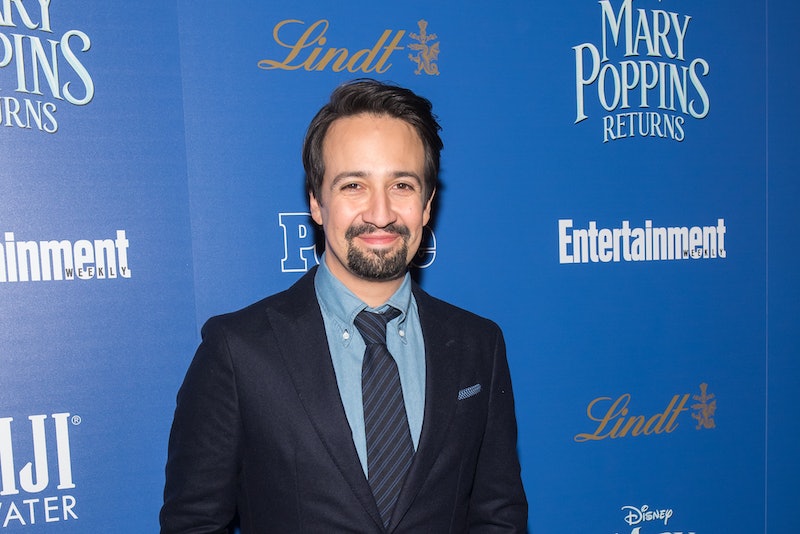 Brooklyn Nine-Nine has managed to round up some pretty spectacular guest stars throughout the years. However, Season 6 may end up topping them all because the legendary Hamilton creator Lin-Manuel Miranda will be guest starring on Brooklyn Nine-Nine in a role that is just too perfect for words. According to Entertainment Weekly, Miranda will be playing David Santiago, Amy's brother and ultimate rival in the March 7 episode, titled "The Golden Child." So get ready to take a deep dive into some serious Santiago family drama.

The news of Miranda's casting shouldn't come as a total surprise, given how big of a fan he is of the show. In fact, when Fox first announced that they would not be picking the series up for a sixth season, he was one of several actors to take to Twitter in support of the show finding a new home. "RENEW BROOKLYN NINE NINE I ONLY WATCH LIKE 4 THINGS THIS IS ONE OF THE THINGS," Miranda tweeted on May 10, 2018 around the time that the cancellation was announced, along with the hashtag #RenewB99. So naturally, when he was approached to be part of the show he loves so much, Miranda wasn't about to throw away his shot to be part of the Nine-Nine precinct.

After the series was saved by NBC and picked up for another season, many were curious as to whether or not the show would want to incorporate any of its A-list supporters into upcoming storylines as a thank you, of sorts, for their on-going support. (Along with Miranda, Mark Hamill, Sean Astin, and Patton Oswalt had all been very vocal about Brooklyn Nine-Nine getting renewed.) "We're huge fans of all of those actors," co-creator Dan Goor told Entertainment Weekly during an interview back in May 2018. "And we’d love to try to figure out ways to put them on our world.” So far, mission accomplished.

As of now, it looks like Miranda will only be appearing in the one episode, though that could easily change down the line. A lot could end up depending upon Miranda's schedule, which tends to be pretty busy these days. In fact, he recently reprised his role in Hamilton for a three-week run in Puerto Rico. The proceeds were used to help raise money for artists who found themselves struggling in the aftermath of Hurricane Maria.

Still, given that he's playing a character with such a strong connection to the main cast, there's no reason he couldn't come back for another episode in the future. One visit from Amy's brother definitely won't be enough now that he's played by Miranda.

If the Broadway star does find some open time and is able to reprise his role as Amy's brother in the future, it's doubtful fans would complain. (After all, is there really ever such a thing as too much Lin-Manuel Miranda?) For now, though, let's just be thankful for the time we have, and if he wants to throw a few Hamilton references (or maybe even songs?) into the episode, then who are we to complain.