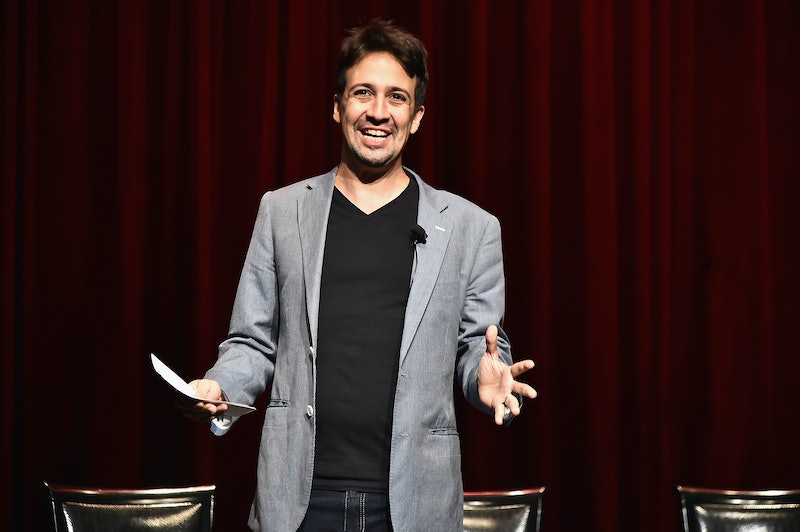 Is there anything worse than voicemails? OK, there are a lot of things worse than voicemails; but you have to admit that in the era of iMessage, leaving a succinct and coherent voicemail is a lost art. Entertainment Tonight released a Drunk History deleted scene featuring Lin-Manuel Miranda and it proves that the tendency to ramble and become increasingly nonsensical when faced with leaving a brief voice message plagues even the best of us — yes, even those of us who have won an Emmy, two Grammys, three Tonys, and an honest-to-goodness Pulitzer.

The scene, which is available on the Drunk History Season 4 DVD out this Tuesday, comes from the Nov. 29 episode "Hamilton," in which the writer/composer of the similarly-titled Broadway smash hit drunkenly narrated the story of Alexander Hamilton's infamous duel with Aaron Burr — as reenacted by Alia Shawkat (Arrested Development) and Aubrey Plaza (Parks And Recreation), with a little help from Tony Hale (Veep), Bokeem Woodbine (Fargo), and musician Dave Grohl in supporting roles.

The voice message in question was left by Miranda for Hamilton's Tony-winning musical director Alex Lacamoire — and while it's hilariously nonsensical, it does differ from the drunken ramblings you or I might leave on our BFF's voicemail in one very specific way: it's all delivered in freestyle rap. The level of Miranda's inebriation just makes the rapping more impressive… even if it's still fairly difficult to follow his train of thought.

The message starts with a reference to Hamilton lyrics, with "lock up your horses and daughters" being an obvious riff on a similar line from the song "Aaron Burr, Sir." Soon after, he ends up rhyming "history" with the word "Chistery," which seems like drunken nonsense until Miranda clarifies: "that character from Wicked," aka the simian who becomes Elphaba's first winged monkey.

After a few quick non sequiturs — including a use of the term "sticky wicket," which he appropriately rhymes with "cricket" (the sport that originated the term) — Miranda admits "I don't know what I'm saying"… twice… before taking a hard left into classic sitcom territory, giving a shout-out to Diff'rent Strokes, then to A Different World, then finally to The Huxtables — the family on The Cosby Show, which is the series that gave birth to the spinoff A Different World.

A mention of "living high off the dole" leads to my favorite moment of free association, in which Miranda connects the word "dole" to both failed presidential candidate Bob Dole and the famous pineapple brand. That tangent leads to a possible reference to The Simpsons when he rhymes "pineapple" with "Miss Krabapple." As Miranda's rap becomes increasingly nonsensical, he repeats "I don't know what I'm saying" for a third time before uttering a random, annoying noise and hanging up. So basically, it ended like 99 percent of voicemails do.

It's comforting to know that, even if he can rap better than the rest of us, Lin-Manuel Miranda still gets just as flustered as we do when his friend's phone asks him to leave a message. Can we all just agree to dispense with his whole voicemail thing entirely? If Miranda can't do it eloquently, none of us can.

More like this
The 'Kenan & Kel' Reunion On 'SNL' Took A Dramatic Turn, Thanks To Keke Palmer
By Brad Witter
The First Trailer For 'That '90s Show' Includes So Many Nods To The Original Series
By Jack Irvin, Alyssa Lapid and Grace Wehniainen
‘The Mosquito Coast’ Book Ending Includes A Major Character’s Death
By Brad Witter
The 'Let The Right One In' Creator Says The Show “Requires” Several More Seasons
By Brad Witter
Get Even More From Bustle — Sign Up For The Newsletter